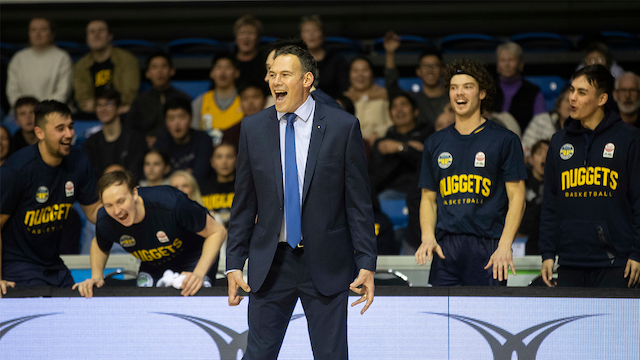 OTAGO Nuggets have ended week three of the 2020 Sal’s National Basketball League (NBL) with back-to-back wins over the weekend. The Nuggets backed up from a demolition job on the Manawatu Jets with a closer eight-point triumph over Nelson Giants last night, getting the job done thanks to some terrific defensive work and a standout game from Jordan Hunt.

The match opened with a Hunt layup, which would be a sign of things to come. Both teams were up for the fight early, with Thomas Ingham sinking a triple at the four minute mark of the term for his Giants side to hit the front, and after an and-one conversion from Zeb Lovell, Nelson led by four points. Jordan Ngatai had seen enough and knocked down not one, but two step back jumpers in the last five minutes of the game, then produced a layup to hand his side the lead. Hunt did the rest with a couple of free throws and a triple with 90 seconds left on the clock which helped his team to a seven-point advantage at the first break.

Theo Johnson was fast out of the first break, sinking a triple after missing an earlier two-point jumper. The teams traded blows in the opening few minutes as Mike Karena produced a neat hookshot to draw within four points, but Ngatai and Hunt again found their way to the basket, and Hunt’s second chance efforts off his own offensive rebound resulted in a neat layup and an eight-point lead. For every basket the Giants scored, the Nuggets had an answer, and it was not until Riley Bensemann delivered with back-to-back baskets in the last two minutes that Nelson drew within three points. Ngatai and Hunt again produced some magic to put it out to five with 48 seconds left, but a Dane Brooks driving layup had Nelson draw within three at the main break.

After the Giants had cut the Nuggets lead in that second term, Kane Keil came out fired up, immediately dropping a triple off a Ngatai assist. Brooks and Josh Aitcheson were trading blows themselves in the first couple of minutes, putting five points on the board apiece, and Aitcheson managed eight consecutive team points before being subbed out. Ingham continued his good form of late with a couple of jump shots as both teams started playing end-to-end basketball and making the most of their opportunities. At one stage Hunt had extended the lead out to nine with a step back jumper, and then in the space of a minute, four points to Johnson and two to Karena had the Giants raw within three. Once again Ngatai stepped up when it counted with five consecutive points, and then triples to Hunt and then the first points to Jarrod Kenny late in the term ensured the Nuggets were on top with a quarter to play, 69-61 ahead.

Sensing their moment early in the fourth, the Giants made a move with seven of the first nine points to draw within three at the two-minute mark. Hunt was still proving a thorn in their side and now Kenny was starting to get going with a couple of free throws and a layup to nudge the advantage back out to nine midway through the term. Karena was doing his best to try and stem the Nuggets lead which got out to 11 at one stage. Four points to Karena, and an Ingham layup had the Giants within seven, but again the time was winding down and the Nuggets were doing enough to defend with plenty of huge blocks. With a minute left, Hunt produced a layup to extend the lead out to 11, and while the Giants got within eight with 32 seconds on the clock, a deliberate foul on Ngatai and then the subsequent free throws going in ensured Otago would go home victorious, 87-79.

For the Giants it was Ingham (15 points, five rebounds, three assists and one steal) and Karena (15 points, four rebounds, one assist and one steal) who top scored in a losing side. Johnson had 12 points and four rebounds off the bench, while Brooks finished with 10 points and eight rebounds in an important role for the Giants. Lovell was one of three players who had seven points as well, notching up five rebounds too.

Otago Nuggets have a short break before tipping off on the first day of week four against Taranaki Mountainairs in what promises to be an absolute thriller. Nelson Giants next play on Wednesday when they host Franklin Bulls in a must-win contest if they are to keep in touch with the top few teams.