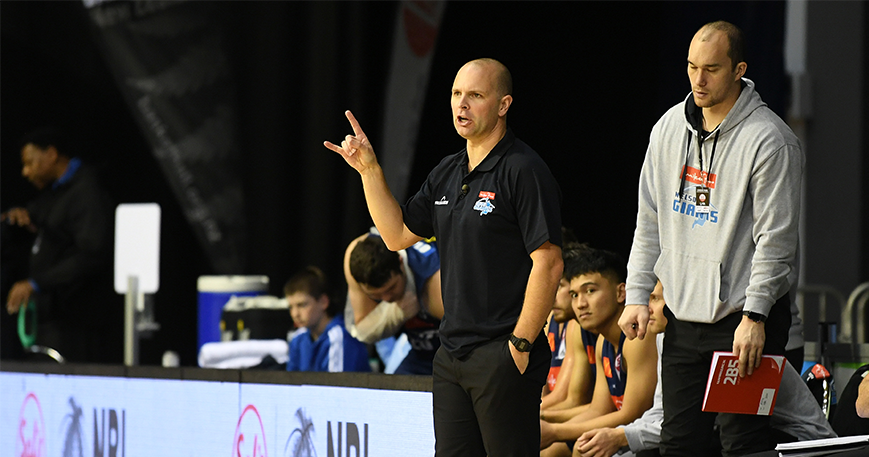 NELSON Giants’ big third term saw them accelerate away from Auckland Huskies and ensure they won back-to-back games thanks to an eight-point win last night. The Giants scored 28 points, but held their opponents to just 11, handing them a 23-point lead at the final break, enough to hold off a fast-finishing Auckland side that won the last term, 29-14. There were some big outs for either side with Mika Vukona still sidelined following appendix surgery and Leon Henry serving his one-game suspension he suffered in the Huskies’ solitary win against Taranaki. In the end, the Giants were a touch better for longer winning 91-83.

Continuing his hot form since his return, Mike Karena won the tip for the Giants and found himself with the ball inside where Henry’s replacement starter Nathan Wilson met him at the cup with a big block, although Karena recovered it and scored the game’s first points with a baseline jumper. Building some momentum in his first start on the season, Wilson would make his away inside with a silky drive which drew the foul and his one for two makes at the line would be the first for Auckland.

Having shaken off his quarantine rust in his last game, Izayah Mauriohooho Le’afa would open his scoring account with a pretty floater which would ignite the spark on his incredible first half of play. Not so prettily, however, Karena would find himself with two fouls early as big man Tohi Smith-Milner would draw the charge on the next play, with some Karena displeasure with the official drawing a technical foul next to his name. After just two minutes of play, Nelson’s star player would find a spot on the pine.

Back-to-back triples from Mauriohooho Le’afa and young gun Taine Murray saw the Huskies gain an early lead, as a smaller and more athletic starting five inevitably resulted in faster transitions from Auckland. The Giants would slowly start to claw their way back into the game through Josh Leger – who came in for Karena – and his seven-point opening term. He kept his spot in the team despite Thane O’Leary returning from injury, with the decision paying off for Mike Fitchett and his Giants.

A Mauriohooho Le’afa steal would lead to a huge baseline cut and slam for Wilson on the back of a no-look pass from Marvin Williams-Dunn, a beautiful highlight play in what was otherwise a quiet night for him. Trading buckets for the remainder of the term, Smith-Milner made a tough finish inside which finished the quarter with the scores tied at 20. Poor shooting from Nelson allowed the early deficit, but some rigid defence kept them in the game as they forced six turnovers from Auckland early.

Dane Brooks would start the second quarter athletically with a big block, a steal and a layup setting the tone for the Giants’ next two quarters. With small ball paying off early offensively for the Huskies, the Giants knew they had to take advantage of the absence of Henry on Auckland’s defensive end. Zeb Lovell targeted a leaner Wilson in the post on multiple occasions, a clear indication of the Giants desire to attack the paint going forward.

Nelson come hard out of the gates despite another athletic defensive play from Wilson. Their scoring continued to come from inside the paint as the Huskies were playing too tight defensively on the perimeter despite Nelson’s inefficiency from deep, with the Giants blowing past the defenders. The start saw them get out to an eight-point lead, with the return of Karena leading you to believe it would get worse for the Huskies. Mauriohooho Le’afa did not care for that as he would steal the show, scoring on the Huskies’ next four possessions which included three triples and a long two. The game began to heat up physically alongside the scorching hot Mauriohooho Le’afa who would end the first half with a whopping 26 points, courtesy of six threes.

The two teams would continue to trade baskets down the last stretch of the first half, although some Brooks hustle with the Giants small ball would end the half and the second quarter the way he started with a big swat, a steal from the inbound and an assist to a Josh Bloxham layup taking us into half time. Despite Mauriohooho Le’afa, the Giants would lead 49-43 with 20 points from the bench no doubt a contributing factor, as well as attacking inside as they got to the line and earned 22 points in the paint for the half.

A one-man show for the first half, the Huskies needed more contributions in the absence of Henry, but contributions from anyone was scarce for the third quarter. Karena would start the quarter having just played three and a half minutes in the first half and his impact was on display immediately with a steal and assist leading to a Bloxham three. A nine-point scoring run would take the lead out to 15 before a Murray triple would settle things down. The settling was only momentary, however, as their next score would not come for another three minutes.

The Giants played deny ball defence on Mauriohooho Le’afa early as the performance of the two teams went in opposite directions. Nelson’s active ball movement was quick and efficient as Auckland’s one-on-one offense was not paying dividends.

Leger’s five points and a corner three from Johnson down the stretch would give Nelson a near insurmountable 23-point lead heading into the last break, ending an abysmal 28-11 quarter the Huskies would rather forget.

Mauriohooho Le’afa missed his only two shots for the quarter as Williams-Dunn remained scoreless on the game. The Huskies were beginning to wonder where their next points would come from as Karena would re-enter the game – an even more worrying sign for them.

Needing to throw whatever they had left at the Giants if they wanted to have any chance of coming close, the Huskies got the start they were after with Nicholas Brophy getting to the line, and a Wilson steal following that and resulting in a Mauriohooho Le’afa three. Their newfound momentum was quickly halted with Brooks being fouled on a three-point attempt, as the Huskies struggled to string together consecutive stops.

Trading baskets for most of the final quarter, the Huskies found a final gear as they managed a 10-0 run within a minute, but it was too little too late. Despite the single digit loss, it was a convincing win for the Giants as they now find themselves third on the ladder at the conclusion of week two having won 83-91.

Leger (14 points) and Tom Ingham (14 points, two steals) were among the best for the Giants as Karena (10 points) was kept quiet due to foul trouble.

Mauriohooho Le’afa was fantastic with 32 points at 50 per cent from the field, while Wilson (10 points, seven rebounds) and Murray (16 points) were also serviceable. The return of Henry will be welcomed for their match against the Nuggets on Tuesday as they will look for more performers to scrape them off the bottom of the ladder.