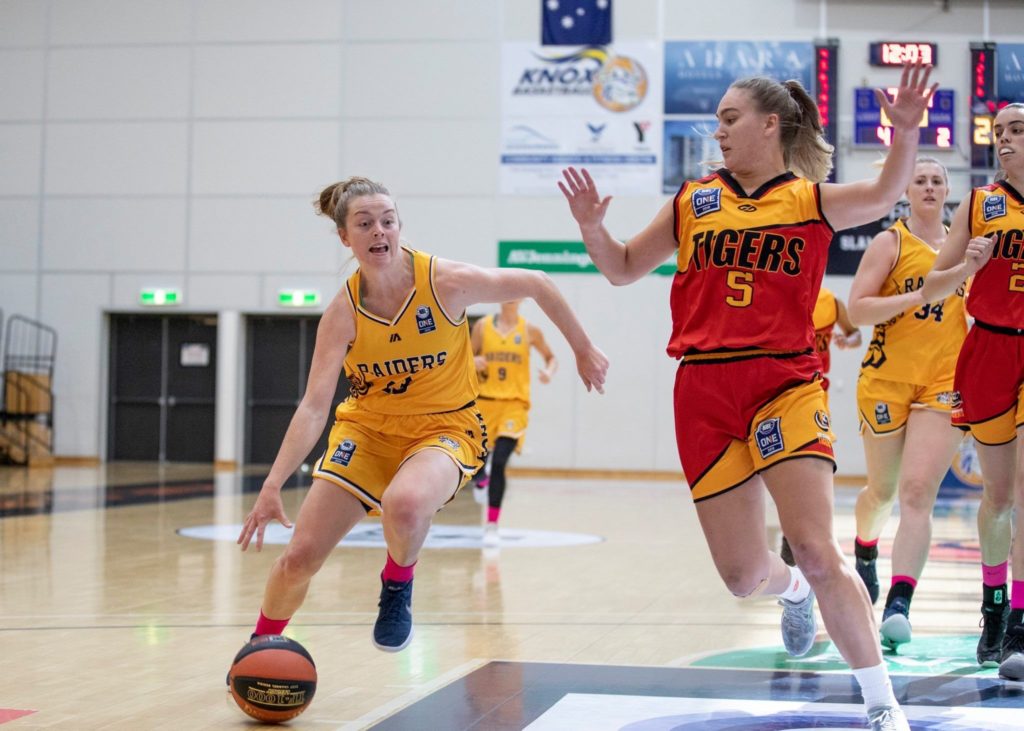 A THRILLING one-point game to open the round and some impressive performances by Dandenong Rangers and Bendigo Braves have seen the sides remain undefeated at the top of the table with four wins from as many games, while Ringwood Hawks also sit undefeated after the Hawks’ third consecutive win on Sunday. There are still two games to come in Round 3, with Bendigo taking on Frankston tonight and Geelong hosting Eltham on Saturday evening.

The game of the round came in the opening match of Round 3, when Frankston Blues stormed from six points down at the final break to run over the top of Geelong Supercats in an exciting 65-64 victory in front of a home crowd. Steph Reid scored 18 points, six rebounds and seven assists in a big game for the Blues, while JoAnna Smith posted 17 points, eight rebounds, two assists and two steals to also be prolific in the win. Taylor Lee (14 points, five rebounds, two assists and one steal) and Saraid Taylor (seven points, seven rebounds, three assists and three steals) were others who stood out. For the Supercats, Sara Blicavs posted 16 points and a whopping 16 rebounds, as well as two assists and five steals in a best-on-court performance in a losing side. Isabelle Bourne (15 points, eight rebounds and two steals), Jazmin Shelley (13 points, four rebounds and three assists) and Ebony Rolph (12 points, seven rebounds, three assists and two blocks) were others who stood up in the defeat.

Dandenong Rangers remained undefeated with a comprehensive 17-point win over Ballarat Rush at home. The Rangers led throughout the game, racing to a 10-point lead by half-time, and while the Rush won the third term by a point, the Rangers powered home by eight points in the final term to win by a comfortable 17. Aimee Clydesdale (28 points, six rebounds, seven assists and four steals) and Colleen Planeta (27 points, 12 rebounds and five assists) were the most damaging duo for the Rangers, while Taylah Gillam assisted with 13 points and three rebounds. For the Rush, Georgia Amoore top-scored with 15 points, three rebounds and six assists, while Olivia Backmann (13 points, seven rebounds), Claire Constable (11 points, four rebounds) and Hsi-le Bao (nine points, eight rebounds and four assists) were others who impressed.

Bendigo Braves’ win over Kilsyth Cobras kept the visitors undefeated, running out 70-64 winners at Kilsyth. Gabrielle Richards was terrific with 28 points and 12 rebounds – nine defensive – while Nadeen Payne (17 points, five assists) and Kelly Wilson (15 points, 11 assists and five rebounds) were prolific across the court. For the Cobras, Clare Carmac stood tall with 21 points, six rebounds and three assists, while Klara Wischer was equally impressive off the boards with six rebounds to go with 16 points and two assists. The Cobras also suffered a second loss in Round 3 at the hands of the undefeated Ringwood Hawks, 51-68. The Hawks dominated from start to finish and easily ran out winners by 17 points, with Cassidy Mihalko (22 points, 10 rebounds, two assists, three steals and two blocks) the stand out player on the court. Antonia Farnworth was also impressive for the Hawks, notching up 21 points, four rebounds and two assists. For the Cobras, Sarah Boothe posted 12 points, nine rebounds and two blocks, while Kara Tessari scored nine points and had five rebounds in an otherwise disappointing day for the visiting team.

At the same time up at the State Basketball Centre, Knox Raiders dominated a sluggish Melbourne Tigers outfit, running away 104-72 winners in a comprehensive performance. The Raiders scored 20 or more points in every quarter, and at the same time, restricted the Tigers to less than 20 in every term. Bec Ott was unstoppable in the front half, racking up 28 points, shooting 66.7 per cent from the field, while also recording six rebounds, four assists, two steals and two blocks. Bree Whatman was the creator in attack, scoring 22 points and finding a teammate who capitalised on five occasions. Abbey Wehrung scored 19 points and had eight rebounds, seven assists and four steals in an all-round performance, while Maddy Wild finished with 12 points and three rebounds. For the Tigers, Monique Conti (29 points, four rebounds, two assists and two steals) and Louella Tomlinson (24 points, nine rebounds, two assists and two steals) were the only two dominant scorers, while Kasey Burton registered eight rebounds to go with her six points. The day before, Melbourne secured a three-point win against a fast-fishing Waverley Falcons, 72-69. Conti was again prolific with 21 points, three rebounds and two steals, while Burton had 14 points and six rebounds as well as three steals and two assists. Tomlinson had a game-high 11 rebounds and nine assists to go with 11 points in the win. For the Falcons, Tegan Cunningham returned from her AFL Women’s stint to score 13 points and an equal team-high eight rebounds, while Nyaduoth Lok posted 13 points, and Kelly Bowen had eight rebounds to go with 14 points.

Knox Raiders had a second big win in Round 3, piling on more pain to the Southern Sabres with the latter’s third defeat of the season thus far. Wehrung posted a game-high 21 points for the Raiders while also assisting her teammates to points on nine occasions. Wild had 16 points and five rebounds, while Lucy Dawson recorded 11 points and seven rebounds in the victory. Rachel Jarry top-scored for the Sabres, recording 17 points, seven rebounds and two assists, while Sherry Glennie had 14 points, five rebounds and two assists. Amelia Todhunter (11 points, seven rebounds, three assists and two steals) was the other strong presence across the court in the loss.

In the all-Tasmanian battle, Launceston Tornadoes spoiled the party for Hobart Huskies, claiming their first win while dooming their cross-state rivals to their first defeat of the season. The Tornadoes started strongly and held firm throughout the match to secure the 104-95 win at Kingborough Sports Centre. Sarah O’Neill posted 23 points, 10 rebounds and two assists, while also big on the boards were Stella Beck (19 points, 11 rebounds) and Stephanie Gardner (19 points, 10 rebounds), as Brittany Hodges (14 points, eight rebounds) was also impressive throughout the match. For the Huskies, Tayla Roberts continued her terrific form helping herself to 27 points, seven rebounds and six assists, while Ellie Collins handed the ball to shooters on a silver platter with 11 assists, 10 rebounds and 18 points of her own.

In other results, Nunawading Spectres handed Eltham Wildcats a 17-point defeat after a strong second half saw them record an 89-72 win. Kathleen Scheer posted 18 points, six rebounds and eight assists, while Rebecca Pizzey recorded a game-high 12 rebounds to go with her 16 points and three assists. For the Wildcats, Chelsea Schweers posted a game-high 24 points, while Margaret Mulligan and Chelsea Brook combined for 33 points and 13 rebounds. In the other game, Albury Wodonga Bandits defeated Diamond Valley Eagles 92-81 thanks to a 25-14 final term. Level at the final break, the Bandits stole the game with the dominant final stanza. Jessie Edwards sank 32 points, 17 rebounds and five assists in a massive game, while Emma Mahady scored 17 points and seven rebounds. For the Eagles, Anneli Maley recorded a team-high 21 points and massive 19 rebounds, while Brianna Gregory (17 points and eight rebounds) and Shelby Chesiek (15 points and four rebounds) were also strong on the losing side.