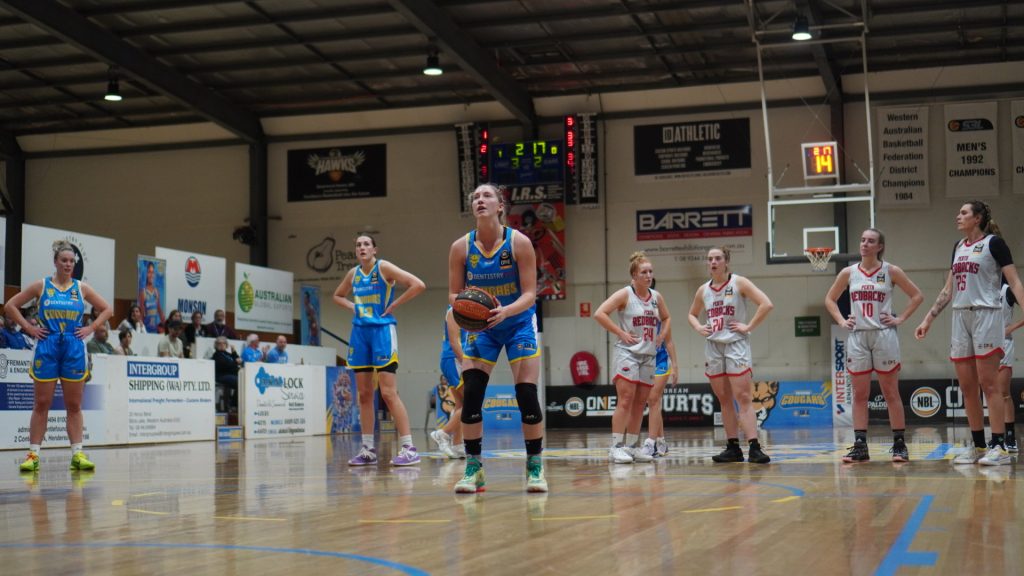 ROUND 8 of the National Basketball League (NBL)1 West competition saw just six women’s division matches played, whilst it was a huge schedule in the men’s with a number of tight contests.

Cockburn Cougars kept their unbeaten streak alive with back-to-back double-digit wins in the NBL1 West women’s competition over the weekend. First up on Friday night they knocked off East Perth Eagles by 10 points, before completing the double with an 11-point win over Perth Redbacks. In the victory over the Eagles, Cockburn won the first three quarters to race out to a 16-point lead at the final break, before the Eagles won the last term 18-12 to cut the final margin to 10, 75-65. In the win against Perth, it was a topsy-turvy game, with the Redbacks hitting the front by a point at half-time after a strong second term, before Cockburn ran out stronger with 42 points to 28 in the second half to win by 11, 87-74.

Of the Perth teams, three East Perth players had 15 points, with Mary Goulding not missing a second of action, and notching up a double-double with 16 rebounds, as well as two assists and two steals. Tahlia Fejo (three steals, two rebounds and two assists) and Moyes (four rebounds) also had influential games. Eryn Fisher (nine points, seven rebounds) and Jade Gowland (eight points, five rebounds) impacted off the boards. For the Redbacks, it was Makailah Dyer (26 points, nine rebounds and four assists) who was the dominant scorer, with Jessica Jakens (10 points, eight rebounds) and Maddison Allen (eight points, 11 rebounds and six assists) who were standout performers.

In other games, the only match below a 20-point margin was the Warwick Senators’ 16-point triumph over Perry Lakes Hawks (95-79). In the bigger blowouts, Rockingham Flames knocked off Mandurah Magic by 20 points, Willetton Tigers rolled Eastern Suns by 31, and Lakeside Lightning dominated South West Slammers by 47.

Two NBL1 West men’s games finished with single-digit differences and are the highlighted games in our review from Round 8. First up is East Perth Eagles’ six-point triumph over Cockburn Cougars in front of home fans. Racing out to a three-point quarter time lead and building on that advantage to eight by half-time, the Eagles soon found it would not all be one-sided with the Cougars hitting back in the third to cut the deficit in half by the final break. Steadying in the last quarter, East Perth got home in a tight one 19-17 to win by six points, 69-63.

Kieran Berry managed the 16 points, three assists and two rebounds in the win, as Andrej Donlagic dropped three of five from long-range on his way to 12 points, eight rebounds, two assists and two steals. Jarrad Anastasio hit a double-double of 15 points, 13 rebounds and five blocks, while Mitch Benger had 10 points, five rebounds and two steals. Logan Thwaites was the other key contributor with nine points and five rebounds.

In the other tight contest, Willetton Tigers got the better of Eastern Suns, claiming a seven-point win at home. The Tigers got off to the perfect start, leading by four points at quarter time and six points at half-time. They built on that lead to have a nine-point advantage at the final break, before the Suns hit back with a strong final term for the eventual seven-point differential, 72-65.

In other results, the Suns finally got a win with a 20-point triumph over Geraldton Buccaneers, which reversed the result for the Buccaneers who earlier claimed a victory over Mandurah Magic. The Magic went down to Rockingham Flames the night before, with Lakeside Lightning picking up two wins over South West Slammers and Goldfields Giants. The Giants had back-to-back losses with a second defeat against Joondalup Wolves, while in the other matches, Perth Redbacks defeated Cockburn Cougars by 17 points, and Warwick Senators proved too good for Perry Lakes Hawks with a 10-point win.