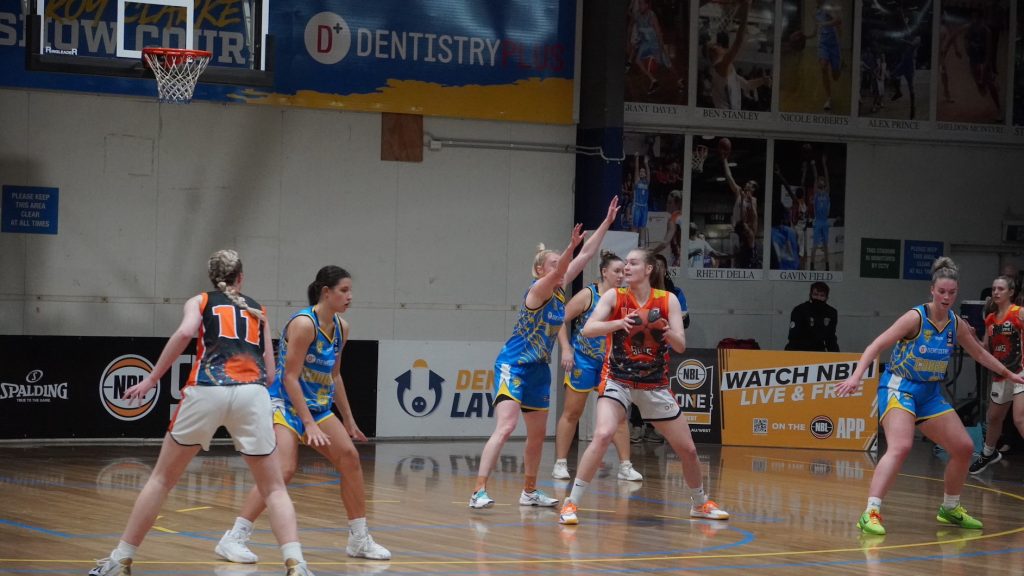 ROUND 13 of the National Basketball League (NBL1) West played host to a number of huge clashes in both the men’s and women’s league. It was a good week to be a fan of the Mandurah Magic as they recorded big wins across both competitions.

Men’s
Mandurah Magic got the better of last-placed South West Slammers, overpowering the side by 16. The Magic dazzled from early on in the opening, as they immediately got points on the board. They remained consistent holding onto the lead, but a determined Slammers unit kept within striking distance. South West managed to steal the lead for a slight moment, as they slowly seemed to be turning a leaf. A timeout from Magic had a significant impact for the Slammers as they kicked into action halfway through the second term. But failing to capitalise on missed shots from Mandurah proved costly as the Magic as crawled back to steal the lead as the third period rolled on.

The Slammers continued to play catch up with the Magic but seemed a step off the pace as their opponents intensified the pressure whilst time went on. A burst of energy from Mandurah kept the Slammers at bay with a three-point jump shot extending the margin by 12 at the beginning of the fourth.

South West suffered a string of missed opportunities at the basket, but unlike the Magic they were unable to make something out of a looming disaster. It started to unravel even further as Mandurah pocketed several baskets as the points started accumulating on the board for the current ladder leaders. The Magic cruised through the final term and bagged the win surviving an early scare.

Jerami Grace was the name to remember in Friday’s game thanks to his rather impressive 24-point performance. Grace achieved six assists and five rebounds for the winning side. Fred Williams was another standout for Mandurah with 14 points. Xavier Garnett-Shaw was unstoppable with 13 points and two rebounds. For South West Slammers it was Caleb Van De Griend and Mitchell Keller who both racked up 18 points for their side and led the charge. Griend impressed with eight rebounds as Keller put on a show with four assists and three rebounds. Rhys Barrett put in work for South West with 13 points, three rebounds and three assists.

In other results from the round, Mandurah scored a second win against the Joondalup Wolves. Joondalup suffered another loss, this time to the Perth Redbacks. Warwick Senators claimed victory against the Eastern Suns by 10 points. As too did the Perth Redbacks in their clash against Willetton Tigers. Ladder leaders Perry Lakes Hawkes added another win to the bag against the East Perth Eagles. Rockingham Flames overthrew Geraldton Buccaneers and won the game by 18. Lakeside Lightning won against Goldfield Giants, meanwhile Cockburn Cougars defeated the Eastern Suns. Perry Lakes Hawkes capped off the round with a win against Geraldton Buccaneers by 51.

The final game of the round saw a thrilling end when the Eastern Suns stunning the Cockburn Tigers to take out the win. It was a tight contest for much of the first period as the lead chopped and changed between both teams. Following a timeout called out by the Cockburn Cougars, the second period saw the Eastern Sun take advantage of the game as they eventually held onto the lead as the term progressed. A two-point jump shot extended the margin to seven, leading to another timeout being called. The Cougars lead soon was extended with both teams throwing out everything that could to get over the line in the second quarter. Eastern Suns tipped the score back in favour of them after a second free-throw saw the scores 28-29.

The third period saw an intense battle emerge between the two sides. A string of shots from the Suns and the Cougars foreshadowed what was going to be a thrilling final period. Once again, Eastern Suns held onto the lead and attempted to keep it from sliding into the fingers of the opposition. The Cougars had moments but simply could not capitalise on the scoreboard, which saw the Suns continue to dominate the scoreboard.

In the gripping final term, it was anyone’s game with the scores 40 – 46 going in the way of the Suns. A three-point jump shot from the Cougars sparked a scoring frenzy from both sides. Despite a final attempt by the Cougars bagging a basket in the remaining seconds of the game, it was not enough to stop the Suns from getting across the line with the win.

Samantha Roscoe’s presence on the court was undeniable with 19 points to her name, as well as seven rebounds and two assists, as she played a critical role in the Sun’s win. Also important for the Suns was Ellyce Ironmonger with 12 points. On top of her on-court blitz, she also had ten rebounds in her 25 minutes of game time. Jewel Williams was imperative for the Suns with a respectable 11 points, six rebounds and four assists. Cougar’s Kahlia Morgan impressed on court with 15 points. Molly Matthews and Nicole Roberts were significant for the Cockburn Coguars too. Matthews had 11 points and five rebounds while Roberts had nine points, six rebounds and two assists.