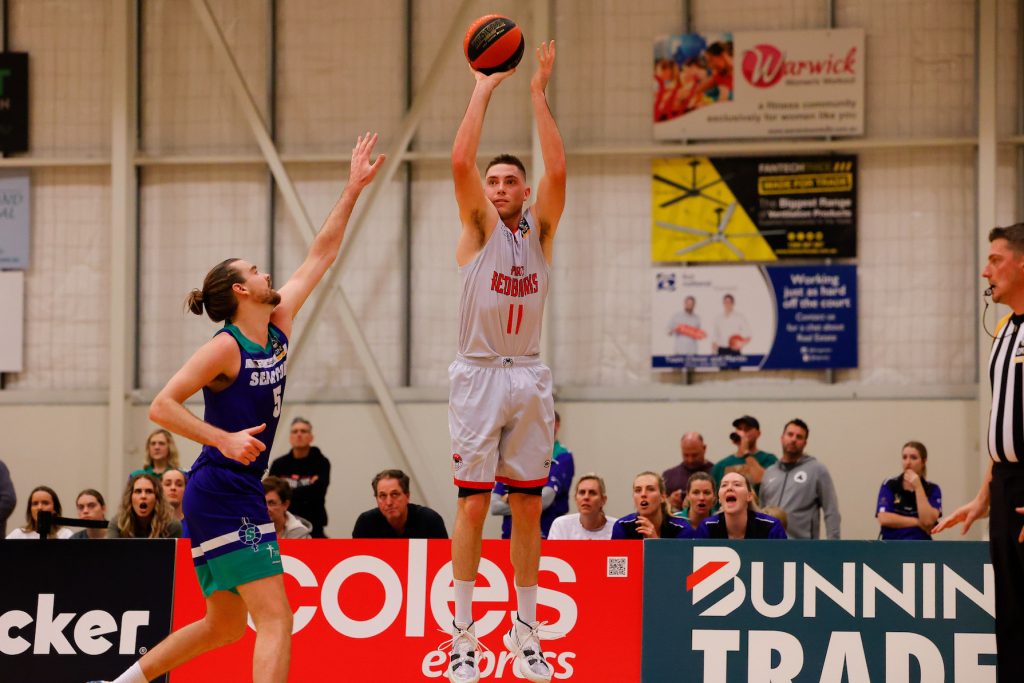 IT was a cracking begin to finals in the National Basketball League (NBL)1 West, with two out of the four games decided by less than five points. Mandurah Magic and Perth Redbacks prevailed in the elimination finals while Lakeside Lightning and Perry Lakes Hawks got the job done in the qualifying stages.

It was a heart in your mouth between the Magic and Cougars With the former just sneaking across the line by a mere point. Mandurah opened up a handy five point lead at quarter time but that was short lived as Cockburn Cougars came to play in the second quarter posting up 19 points to nine. The Magic worked in overdrive in the second half to nullify the presence of the Cougars outscoring them both in the third and fourth quarter to reverse the lead and charge home with a narrow win to progress them through to the next stage of finals.

Jerami Grace was in full flight for the Eagles posting a team high 17 points, while he also imposed himself with nine rebounds, two assists and two steals. Next in line when it came to proficiency was Brian Carlwell and Akau Deng who both managed 12 points apiece in the hard-fought win. Carwell was a dominant figure off the boards with his 14 points and four assists while Deng just fell short of a double-double with his nine. It is no surprise that Nicolas Pozoglou topscored for the Cougars with his 18 points in 36 minutes of action. He also accumulated seven rebounds and two assists in the win. Josh Hunt was in fine form sinking 15 points as Seva Chan was the only other player to hit double-digits with his 13 points,

The Perth Redbacks came to play in their elimination final against Warwick Senators claiming a commanding win. It was all one way traffic in the opening quarter as Perth piled on 29 points while keeping the Senators to just 18. Scoring even up somewhat in the second term as the intensity only increased in the third but the Redbacks kept their nose is well and truly in front. With the final quarter set to play out it was Perth that came home supreme pouring on 28 points to 18.

Justin King had the ball on a string for the senators posting up an impressive 28 points while shooting at 50 per cent from the field. He also chimed in with a handy six rebounds, one assist and one steal. Teammate Caleb Davis was also hot on his heels sinking 25 points along with seven rebounds and two assists in the loss. Cody Ellis and Ethan Elliott were the sole other players to hit double digits with 16 and 13 points respectively. For the red backs it was Louis Timms that shone brightly with his 32 points shooting at an impressive 76 per cent from the field. Timms also managed seven rebounds and three assists in the win as Isaac Gattorna-Hargrave produced 25 points nine rebounds and five assists. Tevin Jackson and Marshall Nelson were others that impose themselves for the Redbacks with 20 points and 19 points each.

The top of the table Lakeside Lightning showed why they are premiership favourites with a hard fought three-point win over Willetton Tigers. The Lightning got their noses in front by six points at quarter time but the Tigers were not about to lie down hitting back in the second quarter with points 35 to 27 to end the quarter up by two points. But with the game on the line Lakeside turned things up a notch flipping the scoreline to a one point advantage at three quarter time. With their tails up they managed to keep the momentum going and hold onto the win.

Rowan Mackenzie dazzled with his 25 points, shooting at 65 per cent from the field while also pulling in three rebounds and five assists. Kyle Armour was also up and about for the Lightning producing a handy 20 points, two assists and three steals in the win. Julius Bowie showcased his class with his 18 points, six rebounds and three assists as Tom Parkinson made waves with his 13 points and 50 per cent accuracy from the field. There was no shortage of points scorers for the Tigers but it was Michael Vigor that led the way with his 21 points and 15 rebounds of which 14 were defensive. Connor Mincherton was the next best out on court with his 15 points and six assists while Damien Scott plied his trade notching up 13 points and five assists in the loss.

The final game of the round saw Perry Lakes Hawks take on Rockingham Flames with the former claiming a convincing 25 point win. The Hawks held no prisoners in the opening quarter piling on 24 points to 18 but that momentum was quickly culled as the Flames bit back in the second term. With the momentum chopping and changing it was time for the Hawks to put their foot down doubling the quarter score of the Flames 22 to 11. Holding the lead Perry Lakes managed to keep that rhythm flowing in the final term to seal the deal.

The Hawks had plenty of scoring options with Andrew Ferguson proving to be a commanding force with his 22 points. He found his stroke from down town nailing five triples from nine attempts while also reeling in eight rebounds, two assists and a steal. Teammate, Mitchell Clarke was a solid contributor with his 19 points while Lewis Thomas proved to be a force to be reckoned with thanks to  his seven points and 10 rebounds. For the Flames, 17 proved to be the magic number with both Ryan Godfrey and Tom Jervis nailing 17 points each with latter also racking up the rebounds with an impressive 15. Atem Bior was in good shooting form with his 14 and six rebounds and while Greg Hire did not trouble the scoreboard he starred off the boards with 11 rebounds.