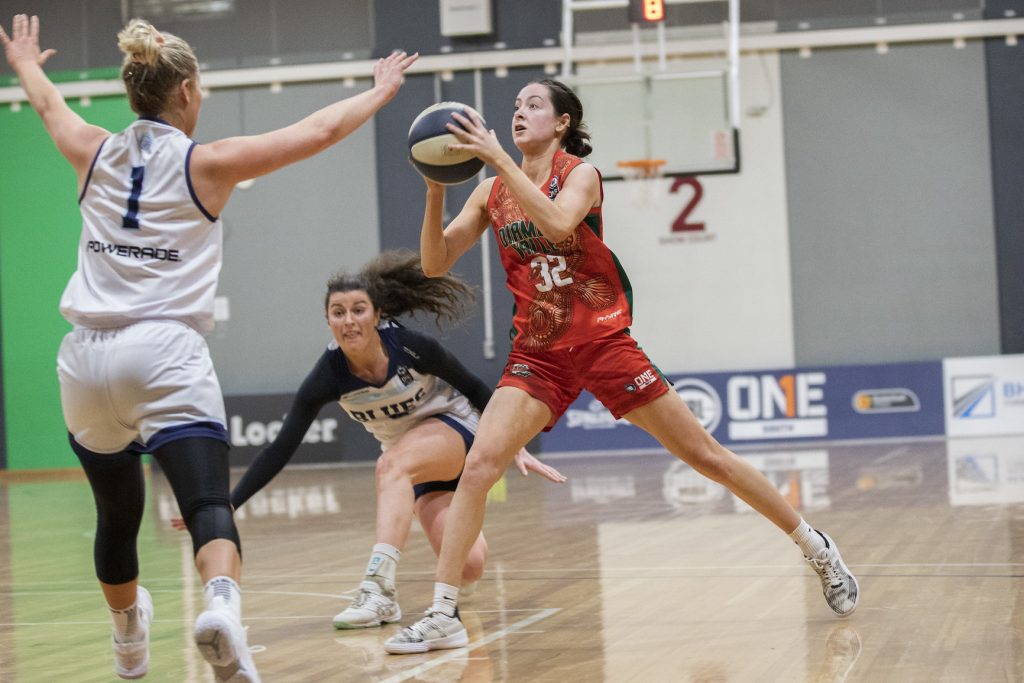 DIAMOND Valley Eagles have provided the biggest upset of the National Basketball League (NBL)1 South women’s season with a stunning overtime victory against the top-of-the-table Frankston Blues. The Eagles were anchored to the bottom in the game, having only one one match in 12 encounters, including a 17-point defeat at the hands of another struggling side in Albury-Wodonga Bandits. Form meant little against a Blues side missing Opal Tessa Lavey, as the Eagles showed anyone in the competition can win on their night.

Unlike the Eagles, Frankston came in with a completely different form line, having only lost one game from 12 encounters, but that did come the week before. Expected to easily account for the cellar dwellers, the Blues slowly lead by a point at quarter time, before extending the advantage out to nine by the main break. Whilst the visitors would have been expected to run away with it – as Darcee Garbin was running riot – the Eagles were not going to go away easily.

In front of home fans, Diamond Valley poured on 23 points to 16 to cut the deficit back to two with a quarter to play, and then timed their run perfectly. Trailing by five points with 1:09 on the clock in regular time, Olivia Bontempelli came to play. She hit a two-pointer and was fouled to secure the And-One chance to cut the deficit to just two. Leading by the single basket, Garbin had a chance from long-range, but Bontempelli was there to not only collect the defensive rebound, but then hit the two-point leveller. A turnover on the Blues’ transition and a missed three-pointer from the Eagles had the game level pegging heading into overtime.

After 90 seconds of overtime, the teams could still not be split, until Sophie Burrows hit the long-range jumper to put the score at 72-69. Bontempelli soon responded with two points of her own for a five-point lead, and whilst Garbin picked up a foul moments later, only put up one of two from the charity stripe. She was never going to go down quietly though, launching a successful three-pointer to draw within a point with 90 seconds on the clock. This time it was Burrows who came to the rescue, picking up foul after foul to nail five of six free-throws and turn the one-point advantage into a six-point win, following two Blues turnovers and a missed long-range jumper.

Bontempelli was sensational for the Eagles, putting up 23 points, four rebounds and three assists, whilst Burrows’ late contribution of 10 points – seven from the free-throw line – eight rebounds, three steals and two assists was also impressive. Imogen Rock had 15 points, 10 rebounds and two assists, whilst young gun Jade Dunne finished with 12 points and five rebounds. Garbin was a one-person shooting machine with a match-high 35 points, and 13 rebounds, hitting four of 13 from three-point range. Taylah Gilliam (14 points, eight assists, six rebounds and three steals) and Saraid Taylor (five points, seven rebounds) were both busy off the boards.

It was a massive round of action overall with a whopping 15 games taking place. Frankston Blues suffered a third loss in four games when they went down to the Kilsyth Cobras at home, with the Cobras also picking up a win against Ringwood Hawks by a solitary point. Last placed Hobart Chargers suffered back-to-back defeats at the hands of Nunawading Spectres and Albury-Wodonga Bandits, with the Bandits’ win over the Eagles taking them to four wins for the year. Mt Gambier Pioneers had a mixed bag, going down on the road to Geelong Supercats, before bouncing back with a big 32-point home win against Sandringham Sabres. It was not all bad news for the Sabres who got past Waverley Falcons by four points.

In other results, Eltham Wildcats picked up a two-point win over Dandenong Rangers, Bendigo Braves won against Nunawading Spectres and Ballarat Rush accounted for Knox Raiders. Meanwhile Launceston Tornadoes posted a 21-point win on the road against Dandenong Rangers, before suffering a heartbreaking one-point loss at the the hands of Melbourne Tigers.