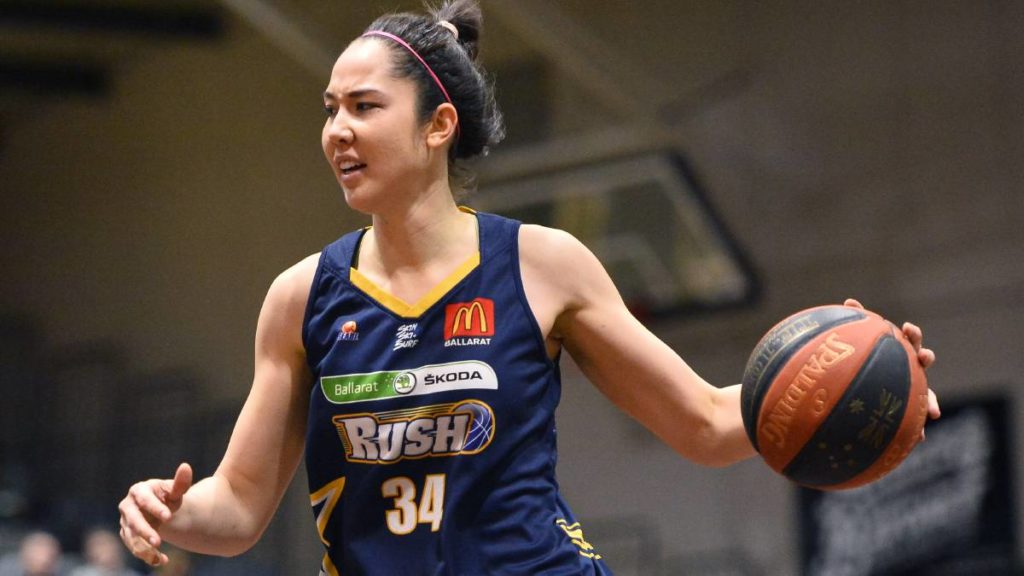 IN light of the COVID-19 global pandemic, the National Basketball League (NBL)1 South Conference has been cancelled this year. As such, while Draft Central intended to do a preview on all teams leading up to the delayed start, it will instead be a team summary from last season and what they might look to improve on for 2021. Today edition looks at the Ballarat Rush womens side that could take plenty from its season.

Ballarat Rush did not have a great season overall, but there were certainly some highlights scattered throughout. Statistically, they were quite sound in the defensive rebounds area, ranking fourth overall in the NBL1 South women’s competition with 28.1. Unfortunately they were not as strong under the offensive basket, but they knew how to set up players, ranked in the top five for overall assists with 17.8 per game. Led by an unbelievable season from Chanise Jenkins, the Rush were able to bounce back from a slow start to win more games than they lost after the first half-dozen matches. The game of the year came at home against Launceston Tornadoes where they came from seven points down at quarter time to completely dismantle the Tornadoes with a 41-point second term, followed up by 33 and 30-point quarters to pile on a record 130 points to the Tornadoes’ 94 in a 36-point win. Seven of the eight players who took the court that day recorded double-figure points, with Jenkins again the star courtesy of 22 points, nine rebounds, 13 assists and five steals, though both Laura Taylor (26 points, 15 rebounds) and Lucy Cochrane (10 points, 10 rebounds) picked up double doubles. Another positive from the season was the Rush’s ability to bring in some real young guns in Annie Collins and Milly Cracknell who played in 15 and eight games respectively, gaining valuable minutes off the bench.

If the Rush could have one thing back from the NBL1 season last year, it would be the start. Ballarat lost its first six games of the year and despite winning its next four – which could have been six had they not lost to Ringwood Hawks by a point before a two-point victory over Frankston Blues – the Rush were playing catch-up for the majority of the season. A yo-yo finish to the year saw them end up just below mid-table, showing they could compete with the finalists, though still that extra power scorer off the title contenders. They were mid-table across most statistics, with the blocks being the most damning stat, ranked 13th overall with just 2.3 per game. But the height, or lack thereof, for the Rush’s squad was a big factor in this regard, with just three players on the list above 182cm, and six just 175cm or smaller.

What a season Jenkins had in 2019, averaging 17.6 points, 6.2 rebounds, 6.4 assists and 3.4 steals per game. There was very little she did not do during the year and was the lead player for the Rush throughout an inconsistent season. Her shooting from the free-throw line was legendary with a 92.8 per cent efficiency, while still recording 53.9 per cent from the field, including 37.3 per cent from three-point range. In short, she was deadly when setting her sights on the basket.

A name change coming into the season saw the experienced player formerly known as Joy Burke have a similar impact as Hsi-Le Bao. She averaged 13 points per game, but it was her work off the boards – a team-high 9.3 rebounds per game –  that really stood out, with the 196cm player providing a presence that not many others on her side could and she led the young team brilliantly.

Hackman had a really strong season off the boards averaging 6.1 rebounds, most of which were defensive, as well as 17 points and 1.3 steals per game in season 2019. She provided a scoring duo with Jenkins and also aided in the rebound category, whilst picking up the second most steals of anyone on her side. She had the most field goal attempts of anyone from the Rush, sinking 40.9 per cent, as well as 33.9 per cent from three-point range.

It was a toss up between Amoore and Cockrane who could have filled this spot, with the duo very different players. Cochrane averaged 7.7 rebounds per game as an 18-year-old 195cm forward, while Amoore became a real playmaker at just 17. She averaged 11.3 points, 2.7 rebounds, 3.2 assists and almost a steal per game, playing 27 minutes per match on average. Her shooting accuracy could improve at 39.5 per cent from the field, but she showed that she has a number of tricks which will push her game even further.

Height. Ballarat Rush has some really talented young players, but not a lot of depth when it comes to height, which is why all the 190-plus players got plenty of rotating minutes. Their smaller list provided plenty of opportunities for winning the ball and creating different avenues to the basket, but were outmuscled by some of the top sides. Their developing young guns have something special that could provide sustained success for the Rush, and if they can retain the list for 2021, then they should go better than in 2019.

They will be hoping that 2021 does not provide such a slow start to the season, and instead hit the ground running with strong performances early. A lot of the top sides were able to stamp their authority and then manage players for the rest of the season rather than play catch-up. With so many players under 21, the Rush is well placed to keep a strong group of core contributors together and build a dynasty going forward.