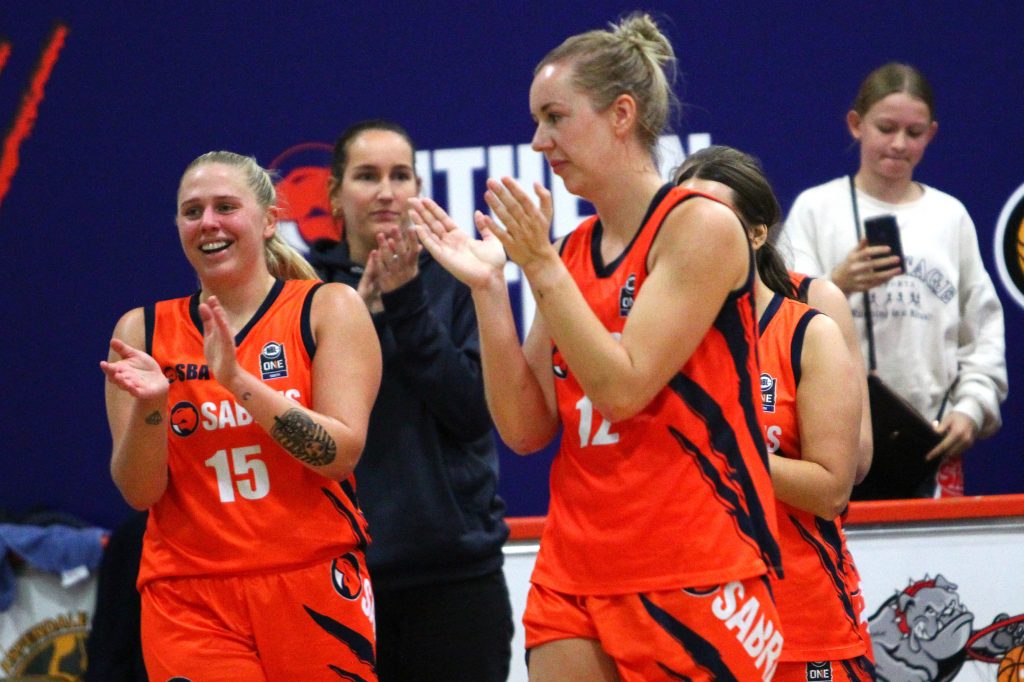 FRANKSTON Blues stand alone as the only side to record three wins so far in the 2021 National Basketball League (NBL)1 South women’s competition, as the results played out over the weekend. We recap how each of the games went down and who the top performers were with some one-sided results.

The first of two wins for the weekend for the Blues saw them claim a narrow six-point victory over Bendigo Braves in a come-from-behind triumph. The Braves raced out to a 21-9 lead at quarter time after a dominant first term, with the Blues clawing their way back to within six points at the final break, before slamming on 24-12 in the last quarter to win, 76-70. Darcee Garbin was again a prolific scorer for the Blues, adding 23 points, 11 rebounds, four assists and three blocks in a standout performance. She teamed up well with Tessa Lavey (14 points, eight rebounds, eight assists and two steals) and Taylah Gilliam (14 points, four rebounds). For the Braves, Abigail Wehrung nailed 24 points, four rebounds, three assists and two blocks, though it was Tess Madgen who came agonisingly close to a triple-double of 16 points, nine rebounds, nine assists and three steals. Piper Dunlop (11 points, six rebounds and three assists) and Kate Oliver (10 points, seven rebounds and four assists) were both impressive for the losers.

A two-pointer from Ballarat Rush’s Kasey Burton in the final 30 seconds – and a missed three-point attempt from Hobart Chargers’ Madeleine Garrick helped the Rush grab a one-point thrilling victory at Kingborough Sports Centre. The visitors trailed by five at quarter time, led by one and then four at the next two breaks, then were caught by the Chargers, only to win at the death. Burton had an equal team-high 13 points, as well as six rebounds, but it was the amazing effort of Alicia Froling (10 points, 20 rebounds and five assists) that stood out, while Kristy Rinaldi (seven points, 13 rebounds) also dominated off the boards. Annie Collins had the 13 points and two rebounds to equal Burton on the scoring front. For the Chargers, Garrick finished with a double-double of 19 points – including five of 11 from long-range – and 10 rebounds, while Ellie Collins had 16 points and 15 rebounds in an equally amazing effort. Tayla Roberts came close to a double-double herself picking up 16 points and nine rebounds.

It was billed as the match of the round, and it certainly lived up to expectations with Frankston Blues moving to 3-0 for the NBL1 South season, defeating Dandenong Rangers by three points. The teams traded blows throughout the match, though the Blues led by 11 points at the final break, before Dandenong hit back with a 23-15 final quarter to get within three points, but fall short, 78-75. Garbin had another outstanding game with 30 points – four of 10 from long-range – and eight assists, while Lavey picked up 18 points, eight rebounds and eight assists in the win. Gililam (13 points, three rebounds and four assists) and Saraid Taylor (seven points, 10 rebounds and three assists) were others who stood out. For the Ranges, Gemma Potter was on fire with six triples leading to her 28 points, as well as five rebounds and two assists. Emilee Harmon (23 points, 11 rebounds, two assists and two steals) and Tenaya Sooalo (16 points, three rebounds, three assists and two blocks) were also busy.

Knox Raiders proved too strong for Kilsyth Cobras in their clash at the State Basketball Centre, winning three of the four quarters to post a 12-point win at home. The teams were fairly even at half-time after counter-contrasting first and second terms, with Kilsyth leading by one point. Knox piled on 24-14 after half-time to set up the win, then held on in the final term for the 82-70 victory. Klara Wischer was the star for the Raiders, picking up a double-double of 18 points and 12 rebounds, as well as three steals and two assists. Marianna Tolo (14 points, seven rebounds) and Kiera Rowe (12 points, five rebounds and four assists) were also busy in the match among a host of other contributors. Lauren Scherf stood tall for the Cobras with 20 points, 10 rebounds and five assists, notching up a double-double while Briahna Whatman (145 points, five assists and three rebounds) and Carly Turner (five points, 10 rebounds and three assists) were also productive.

Eltham Wildcats made it two from two this season in the NBL1 South competition, dominating the Diamond Valley Eagles to win by 32 points. The Wildcats won by nine, seven, nine and seven points in each of the respective four quarters during the 84-52 victory. Anneli Maley had a ridiculous 29 rebounds – 20 defensive – to be unbeatable off the boards, as well as pick up 21 points, two assists two steals. Rebecca Pizzey (11 points, seven rebounds and three blocks), Shelby Britten (16 points, four assists, three rebounds and three steals) were also impressive as Chloe Hilderbrand (10 points, five rebounds and four assists) and Tess Heal (10 points, six rebounds, two assists and two steals) also hit double-figure points. In a disappointing loss for the Eagles, Teah Reichert picked up a double-double with 11 points and 12 rebounds, while Imogen Rock (12 points, five steals) and Sophie Burrows (seven points, six rebounds) tried hard.

Melbourne Tigers were on from the first tip-off as they completely dismantled Albury-Wodonga Bandits in a dominant 48-point win. Storming to a 31-13 lead at quarter time, the Tigers lost the second term by three, but then piled on the points in the second half with 62 points to 29 to run out 116-68 victors. Monique Conti impressed with 28 points, six assists and three steals, teaming up brilliantly with fellow WNBL talent Zitina Aokuso (18 points, eight rebounds, four assists, three steals and two blocks) doing it all. Isabella Brancatisano (25 points, six rebounds, eight assists and seven steals) was arguably the best on the court, while Melissa Prior (17 points, six rebounds) was also outstanding in the win. The Bandits were led by Emma Mahady (24 points, five rebounds), while Jade McCowan (15 points, three rebounds) and Brodie-Paige Theodore (12 points) reached double-figure points in the loss.

Bouncing back from a Round 1 loss, Ringwood Hawks proved too much for Geelong Supercats, running out 29-point victors at The Rings on Saturday evening. The Hawks won the first two quarters to stamp their authority on the match and lead by 20 points at the half, before Geelong edged back one point, only for Ringwood to go again and score 22-12 in the final term a for a 84-55 victory. Marena Whittle had a night out with 20 points and 13 rebounds, as well as six assists and two blocks. Funda Nakkasoglu (16 points, four rebounds, three assists and three steals), Hope Terdich (13 points, six rebounds) and Demi Skinner (12 points, four rebounds) also stepped up in the win. For the Supercats, Stephanie Blicavs knocked down 17 points, along with three rebounds and two assists, while Aimee Clydesdale was the other prominent scorer with 11 points and five rebounds in the loss.

Launceston Tornadoes have stormed to a dominant 31-point win over Ballarat Rush to go 2-0 this season, with Keely Froling picking up another huge double-double against her sister. The Tornadoes never looked like losing, winning the first half by 23 points, then the second half by another eight to secure the 92-61 victory. Froling finished with 28 points, 19 rebounds – 17 defensive – five assists and four steals, while Mariah Payne (22 points, five rebounds and six assists) and Teyla Evans (15 points, six rebounds and five assists) were other double-digit scorers. For the Rush, Alicia Froling hit up 27 points, seven rebounds and four blocks to be the best of the losers, while Kasey Burton (13 points, seven rebounds and three assists) and Kristy Rinaldi (10 points, four rebounds and three assists) were both strong.

Nunawading Spectres bounced back from a Round 1 loss to hand the Sandringham Sabres their first loss in three games. The Sabres took control to lead by six points at half-time, but having already played a game this round, the Sabres tired in the second half as the Spectres ran over the top of them, courtesy of a dominant 44-25 half to win, 83-70. Izzy Wright (21 points, nine rebounds) and Louise Brown (20 points, five rebounds and four assists) did the damage on the scoreboard, with Rachel Antoniadou (18 points, four rebounds and five assists) not far behind. Rachel Brewster (14 points, 12 rebounds) and Penina Davidson (10 points, 10 rebounds) also picked up double-doubles to share the load across the court. O’Hea was again the standout for the Sabres, picking up 27 points and eight rebounds not leaving the court for a second, while Jarry (16 points, 12 rebounds and two assists) and Amy O’Neill (six points, 11 rebounds) were prominent off the boards.

After their heartbreaking one-point loss last week the Waverley Falcons bounced back to win by eight points against Diamond Valley Eagles, handing their opponents a third consecutive loss in the process. The Falcons were led by Aneta Bandilovska (20 points, two rebounds and two assists) on the scoring front, with Renae Mokrzycki (11 points, 11 rebounds, three assists and four steals) recording a double-double. Nyakoang Lok (15 points, three rebounds, three steals and two assists) and Kelly Bowen (13 points, five rebounds) were the other double-digit scorers. For the Eagles, Burrows scored a double-double of 14 points, 10 rebounds and four steals, while Jade Dunne (17 points, four assists, four steals and two rebounds) and Olivia Bontempelli (12 points, five rebounds and two locks) were also steadfast in the loss.