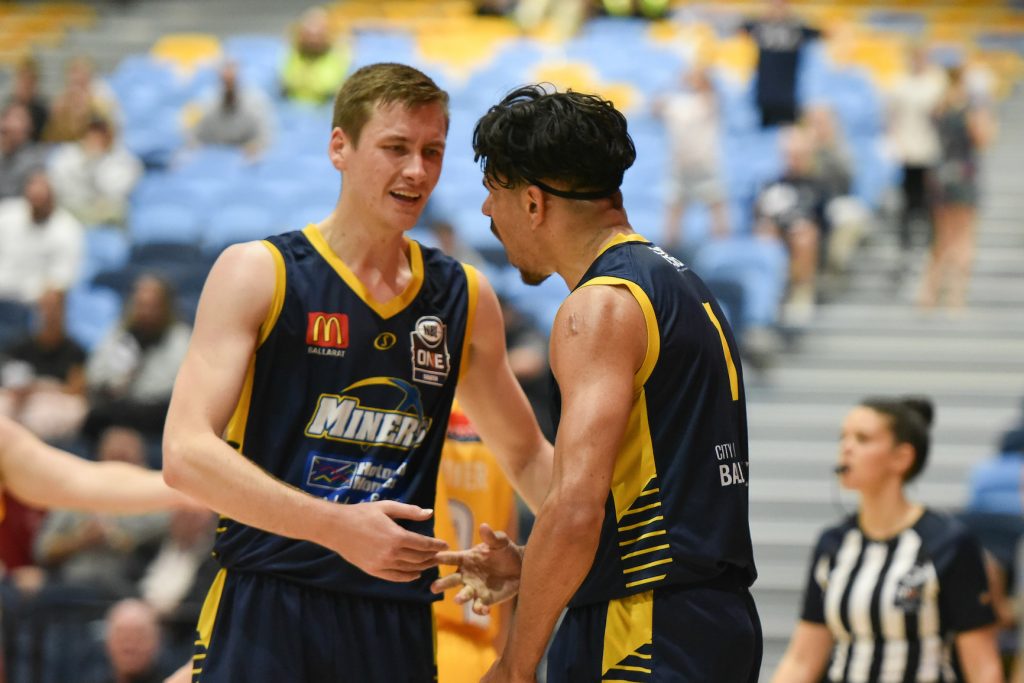 BALLARAT Miners have won an overtime thriller in the National Basketball League (NBL)1 South men’s match of the round against Mt Gambier Pioneers. Coming into the match, the Miners were 3-3 and locked in the bottom six, whilst the Pioneers were running hot with a 5-1 win-loss record to-date. The South Australian team playing at home were highly fancied to win their sixth consecutive match against a Miners side that had been up and down throughout the 2021 season.

The first term indicated the match was likely to be an even one, as the Pioneers scored 19-18 in the opening term to take a narrow one-point lead at the first break. That advantage extended out to seven points by half-time, which put the Pioneers in a 40-33 position. Looking in a bit of trouble, the Miners stormed to the lead with a dominant 25-12 third term that made all the difference, shutting down the home team’s offence, and grabbing a six-point lead at the final break.

In a see-sawing final stanza, the lead changed multiple times, with the teams trading baskets, and missing shots, and the Miners – courtesy of Sam Short – took a two-point advantage with a Pioneers timeout called in the final minute. When William Hickey nailed one of his two free throws – two would have certainly made life difficult for the Pioneers – the lead was out to three. Then Thomas Daly got the ball to Tom Kubank who delivered the three-point ranger to tie the scores. Ballarat Miners had several chances in the dying seconds – with Matt Kenyon have a couple of shots and Short attempting a jumper but nothing would stick. The buzzer sounded with the teams level at 68 points apiece.

Five minutes later, and the sides still could not be split, with the teams again at 76-all. For each Miners basket or points, the Pioneers responded. The lead changed four times in the first two minutes seconds of the second overtime, with a Duom Dawam jumper putting the Pioneers up by one with 3:11 on the clock. Hickey handed his side back the lead with free throws before Nick Marshall did the same for the home team, and the lead changes went up to six. It was not until Marshall could not quite find his range, with three shots in the final minute, as Hickey made him pay for the first set of missed shots with 40 seconds on the clock. Marshall finally nailed one off the second chance points of his own jump shot, and the Pioneers were one-point up. Just as it looked like the home fans would leave happy, Hickey assisted Jock Perry who drained the three-point jumper with four seconds remaining to win the game.

Hickey finished with an outstanding 31 points, 14 rebounds, three assists, one steal and one block in the win, teaming up well with Short (27 points, nine rebounds, two assists, two steals and one block), whilst Perry also picked up a double-double of 17 points and 14 rebounds. Deng Acuoth was phenomenal close to the basket with five blocks – including a crucial one late – as well as eight points and five rebounds. Jordan Lingard (five points, eight rebounds) was the other scorer for the Miners.

In other results, Hobart Chargers suffered defeat at the hands of Dandenong Rangers, before posting a win on the road against Sandringham Sabres. North West Tasmania did the double in Victoria, knocking off Eltham Wildcats and Kilsyth Cobras in great wins to head back to the Apple Isle happy. Meanwhile Frankston Blues also picked up two wins, this time over Geelong Supercats and Albury-Wodonga Bandits, as the Bandits suffered yet another defeat at the hands of Ringwood Hawks. Nunawading Spectres defeated Knox Raiders by 29 points, Diamond Valley Eagles took care of Kilsyth, Waverley Falcons held off an impressive Bendigo Braves by 11 points, and the Spectres easily rolled past Melbourne Tigers in the final game of the round.