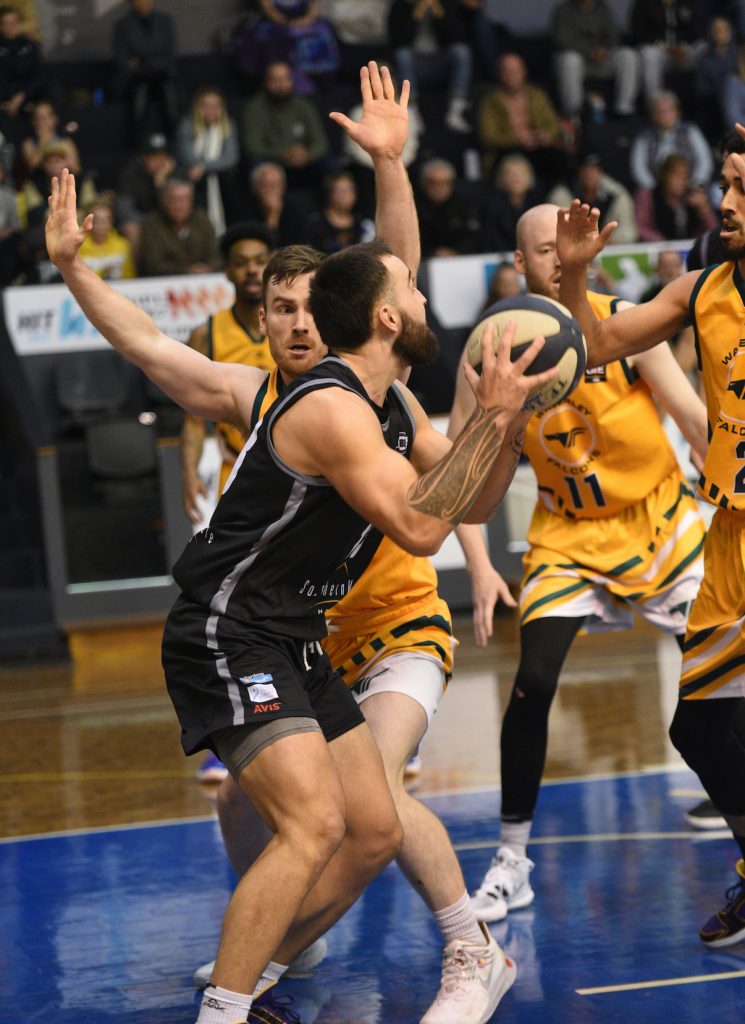 NO National Basketball League (NBL)1 South men’s team remains winless after both Albury-Wodonga Bandits and Dandenong Rangers secured wins this round to even up the ladder following Round 5 of action.

A dominant first quarter set up Hobart Chargers for a memorable 10-point win over Diamond Valley Eagles on Friday night. The Chargers piled on 40-22 in the opening term, and whilst it was fairly even after that – and the Eagles made up nine points in the second half – it was the first stanza that did all the damage as Hobart won 107-97. Jonathan Mines lead the way with 32 points – including seven of 14 from three-point range – two rebounds and two assists. Jack Stanwix (19 points, seven rebounds and seven assists), Zachary White (16 points, six rebounds) and Koen Sapwell (11 points, six assists and three rebounds) were other productive scorers in the victory. Robert Heath top-scored for the Eagles with 21 points, as well as seven rebounds and three steals, while Blacio Owili (13 points, seven rebounds and two assists) and Joel Capetola (12 points, six rebounds and four assists) were also busy.

Doubling down on Diamond Valley’s pain on the Apple Isle, North West Tasmania Thunder came to play with a fairly impressive 22-point win at home. The Thunder raced out to a seven-point quarter time lead, and whilst the Eagles cut that back by two, the home team dominated the second half with a 49-29 effort to run out 100-78 victors. Taran Armstrong (19 points, six rebounds, four assists and two steals) was lively, as was Joseph Chilcott (17 points, six rebounds), Paul Campbell (16 points, 13 rebounds and five blocks) and Bradley Simpson (16 points, six rebounds and four assists). For the Eagles, Heath again top-scored with 16 points in defeat, and also collected three rebounds. BJ Symons (13 points, three rebounds and three steals) and Owili (10 points, five rebounds and two steals) were also strong contributors in the loss.

Bendigo Braves’ ripping start to the season continued with an impressive 14-point victory over Eltham Wildcats at home. The Braves lead by a point at quarter time and half-time, and extended that to five by the final break, before blowing their opponents away with a 28-19 fourth quarter to win, 92-78. Ray Turner recorded a double-double of 25 points and 10 rebounds, whilst Nelson Larkins (16 points, seven rebounds and four assists) and Chris Hogan (11 points, three rebounds and three assists) were also productive in the Braves’ win. Adam Doyle knocked down 32 points – five of 11 from long-range – as well as two rebounds and two steals to lead the way for the Wildcats, while Ovie Magbegor (eight points, 13 rebounds and three assists) and Sam Whelan (eight points, four rebounds) contributed well.

After trailing most of the game, Frankston Blues stepped up in the final quarter to blow away Dandenong Rangers by eight points, 104-96. The Rangers raced out to a five-point quarter time lead, and were up by eight points at the last change, before Frankston stormed home with 40 points to 24 and win in a tight one. Dillon Stith was huge with 32 points, nine rebounds and four blocks, while Lachlan Barker (25 points, five assists, four rebounds and three steals), Alister MacDonald (17 points, three rebounds, two assists and two steals) and Lucas Barker (13 points, four assists, three rebounds and three steals) all had big numbers for the Blues. Oliver Hayes-Brown (31 points, 16 rebounds) was a massive influence across the court for the Rangers, while Sean Macdonald (25 points, six assists and four rebounds) and Declan Soukup (15 points) also impressed.

Kilsyth Cobras’ strong start to the season continued with a low-scoring victory over Nunawading Spectres at home on Saturday night. The Cobras won the first three quarters, with the second and third terms being the most damaging to lead by 12 points at the final break, before the Spectres reduced the final margin to 11 in the 72-61 loss. Ben Ursich (17 points, four rebounds, two assists and two steals), Deng Riak (15 points, 14 rebounds) and Corey Jeffs (13 points, seven rebounds, three assists and three steals) all contributed to the win in their own way across the court. Dain Swetalla had 22 points, nine rebounds and two assists for the reigning premiers, whilst Andrew Steel (20 points, four rebounds) and Costa Hronopoulos (nine points, five rebounds, two assists and two steals) were the next best Spectres in the loss.

After a trying start to the year, Albury-Wodonga Bandits finally broke through for their first win of the season, downing the Waverley Falcons by 12 points on the border. The Bandits raced out to an eight-point quarter time lead and 11-point advantage at half-time. As has been the case in various matches this year, the opposition hit back in the second half to cut the deficit to seven points at the last change, but this time the Bandits stepped it up to hold on, win the final quarter in emphatic style 30-25, and record the 94-82 victory. Mitchell Dance (28 points, 10 rebounds) picked up a double-double, while Sharif Watson (24 points, nine rebounds, five assists, two steals and two blocks) and John Crnogorac (14 points, nine rebounds) almost did the same in the win. Bennie Lewis was everywhere for the Falcons on the scoring front, dropping 32 points – six of 11 from three-point range – four rebounds and three assists. The other two double-digit scorers were Dexter Kernich-Drew (16 points, nine rebounds) and Durrell Mcdonald (12 points, three assists, two rebounds and two steals).

In another monstrous performance, Mt Gambier Pioneers picked up their fifth win of the season with a 25-point victory over Knox Raiders. The pioneers showed no mercy in the opening term, bolting to a 15-point quarter time lead. The game was closer after that, but the South Australian side extended the lead to 21 points and 26 points by half-time and the final break, before Knox won the last term to reduce it to a final score of 118-93. Nick Marshall (21 points, eight rebounds and three assists) top scored for the Pioneers as a whopping seven players hit double-digit points. Three others reached double-double milestones in Tom Kubank (19 points, 11 rebounds and four assists), Thomas Daly (17 points, 11 rebounds and seven assists) and Kane de Wit (14 points, 10 assists and four rebounds). The Raiders also had plenty of high scorers with six players hitting double-digit points, lead by Jack Roberts (18 points, four rebounds and three steals), Dylan Hare (17 points, five rebounds and four steals) and Abraham Nyok (12 points, seven rebounds and three assists).

Compiling another loss for the Sandringham Sabres, Eltham Wildcats ran over the top of their opponents with an impressive second half to post a 14-point win. The Wildcats trailed by seven points at half-time then added 58 points to 37 after the main break to run away with the contest, 105-91. Simon Bradbury (22 points, 14 rebounds) and Justin Aver (20 points, 13 rebounds, four assists and three steals) were huge in picking up double-doubles, whilst Whelan was a long-range shooting machine, knocking down eight of 15 from long-range to finish with 33 points. For the Sabres, Nicholas Gabsch top-scored with 28 points and eight rebounds, while James McKinnon (16 points, four rebounds, four assists and two steals) and Kuany Kuany (15 points, nine rebounds and five assists) were also productive getting into double-digit points in the match.

Frankston Blues made it back-to-back wins over the weekend, returning home to Frankston Basketball Stadium to put away Bendigo Braves by 29 points. The Blues raced out to a 10-point lead at quarter time, and 19 points by half-time, and when the teams headed for the final break, it was 28 points the difference. The final term was a lot tighter, but the damage was done, and the home team won 111-82. Lucas Barker came agonisingly close to a triple-double with 17 points, 10 assists and nine rebounds, while Stith (22 points, four rebounds, four assists and four blocks), Lachlan Baker (22 points, five rebounds and two assists) and MacDonald (16 points, six assists, two steals and two rebounds) were again lively. Turner put on another double-double show of 18 points and 12 rebounds, while Jake Lloyd (16 points, eight assists and six rebounds), Brennan Rymer (16 points, five rebounds and three assists) and Matthew Andronicos (14 points, five rebounds) were also steadfast in defeat.

Dandenong Rangers bounced back from a loss the day before to Frankston in order to post an eight-point win over Melbourne Tigers, their first victory of the season. The Tigers lead by five points at quarter time, but the Rangers quickly turned that around to storm to a five-point half-time lead themselves thanks to a 24-14 third term. The visitors maintained the rage in the third quarter thanks to a 28-19 term, before Melbourne cut the deficit back by winning the last stanza, but it would not be enough as the Rangers won, 93-85. Hayes-Brown top-scored again with a massive double-double of 23 points and 16 rebounds, while Macdonald (13 points, six assists and two rebounds) and Riley Simmons (17 points, eight rebounds) were also productive for the Rangers. Melbourne had an even spread of scorers lead by Dogukan Elyazar (16 points, three rebounds), Karabatsos (15 points, six assists, four rebounds and two steals) and Willie (14 points, seven rebounds five assists and two steals) among five double-digit scorers in defeat.