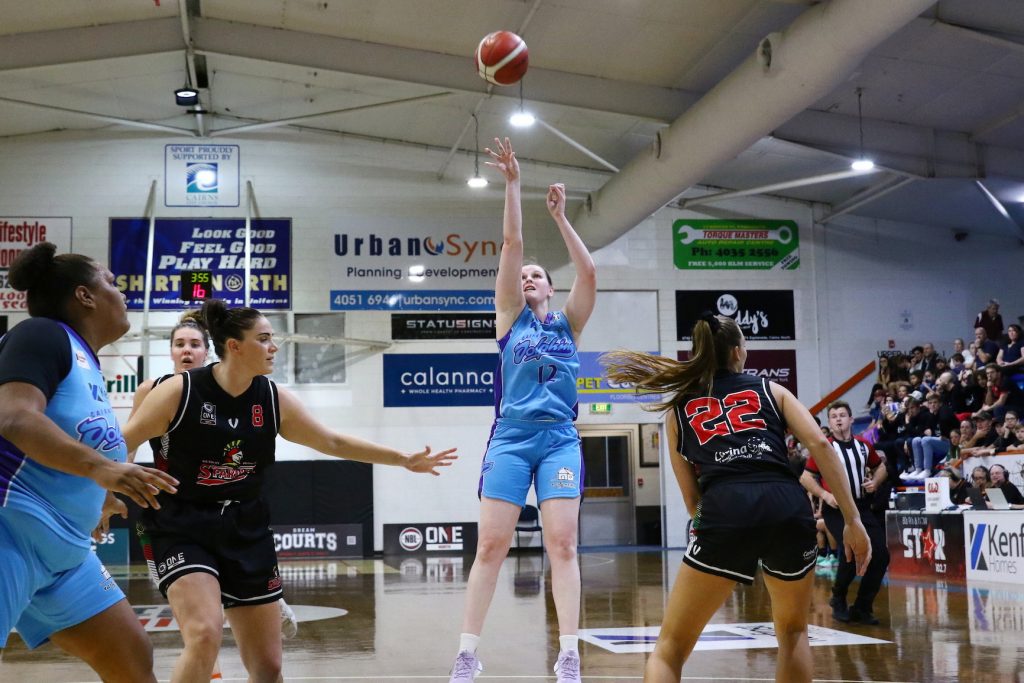 THERE were some big upsets across the men’s and women’s divisions of the National Basketball League (NBL)1 North competition, with some of the NBL players returning to shake up the mix following the conclusion of their seasons.

Southern District Spartans handed Townsville Flames their second loss of the season and created a two-game gap inside the top two in doing so. The second placed Spartans did enough to see off the Flames in a tight eight-point match, winning three of the four quarters. The home team started the stronger of the pair with a 22-19 opening stanza, before the Spartans hit back with a 15-8 second term to lead by four at the main break. A tight second half ensued but the Spartans did enough to win it by four points all up to salute by eight, 71-63.

Kalani Purcell was the chief destroyer with a massive double-double of 27 points and 15 rebounds, working both ends of the floor with an eight/seven split in terms of defensive and offensive rebounds. She also had the three assists and two steals in the win, as Nadeen Payne also collected a double-double of 16 points and 13 rebounds.

Maddison Rocci (12 points, seven rebounds, four assists and two steals) and Ash Karaitiana (12 points, three assists) both hit double-figure points, while Madelyn Willey had a terrible night shooting with just two points (one of 10 from the field) but picked up 10 assists and six rebounds.

It was a much tighter game than the Spartans’ 54-point thrashing of the lowly Cairns Dolphins. The Spartans dominated from the opening tip-off, winning every term by at least nine points and as much as 21, to run out 114-60 victors. In that performance Willey could not miss with 28 points (11 of 14 and six of nine from long-range) and five assists.

Top of the table Logan Thunder easily accounted for last placed RedCity Roar with a 27-point victory, as Gold Coast Rollers had a mixed weekend from two games. Losing to Mackay Meteorettes by 24 points, the Rollers bounced back to post a 19-point victory over Rockhampton Cyclones. In other results, South West Metro Pirates knocked off Ipswich Force by 16 points, and USC Rip City posted a 10-point victory over Brisbane Capitals.

In a battle of the winless sides, Ipswich Force got on the board with a six-point victory over South West Metro Pirates. The result left the Pirates and Rockhampton Rockets as the only sides yet to taste victory in season 2021, as the Force leapfrogged RedCity Roar who pushed the top of the table undefeated Logan Thunder all the way in a 12-point defeat. The Force lead by two points at quarter time and five at the main break, before the Pirates hit back to take control and win the second half by the same margin. Forcing overtime, it was the Force who stood up in the extra period 13-7 to win by six points, 93-87.

Nathan Sobey was a key in for the Force, notching up 27 points – though shot at an inaccurate 34.62 per cent, including four of 19 from long-range – nine rebounds, six assists and two steals. He teamed up well with Jason Ralph (15 points, nine rebounds and eight assists) and Manylok Malek (12 points, seven rebounds) in the win. Kai Woodfall had 29 points, eight rebounds, five assists and three steals for the Pirates, while Brendan Teys (16 points, eight rebounds and six assists) and Ramy Kodi (16 points, nine rebounds and two steals) were both impressive.

In the tight game between the undefeated Thunder the the struggling Roar, it was RedCity who jumped out of the blocks to pile on 27-20 in the opening term. That momentum swung in the other direction after the break though for the Thunder to take a four-point advantage into half-time. They extended it to seven by the final break and cruised to a 12-point win, 96-84. Jeremy Kendle (24 points, 12 assists and three rebounds), Boston Mazlin (21 points, five rebounds) and Blake Jones (12 points, 15 rebounds and five assists) were all among the Thunder’s best in the win.

In other results, Southern Districts Spartans had a weekend to force, dropping both games to slip to eighth and a 3-3 record following losses to Cairns Marlins (17 points) and Townsville Heat (11 points). In other results, Mackay Meteors knocked off Gold Coast Rollers by 12 points to keep in touch with the top two, and USC Rip City accounted for Brisbane Capitals by 17 points in an upset to move to 2-2 and sentence the Capitals to their second loss of the season and a 4-2 record in fourth spot.