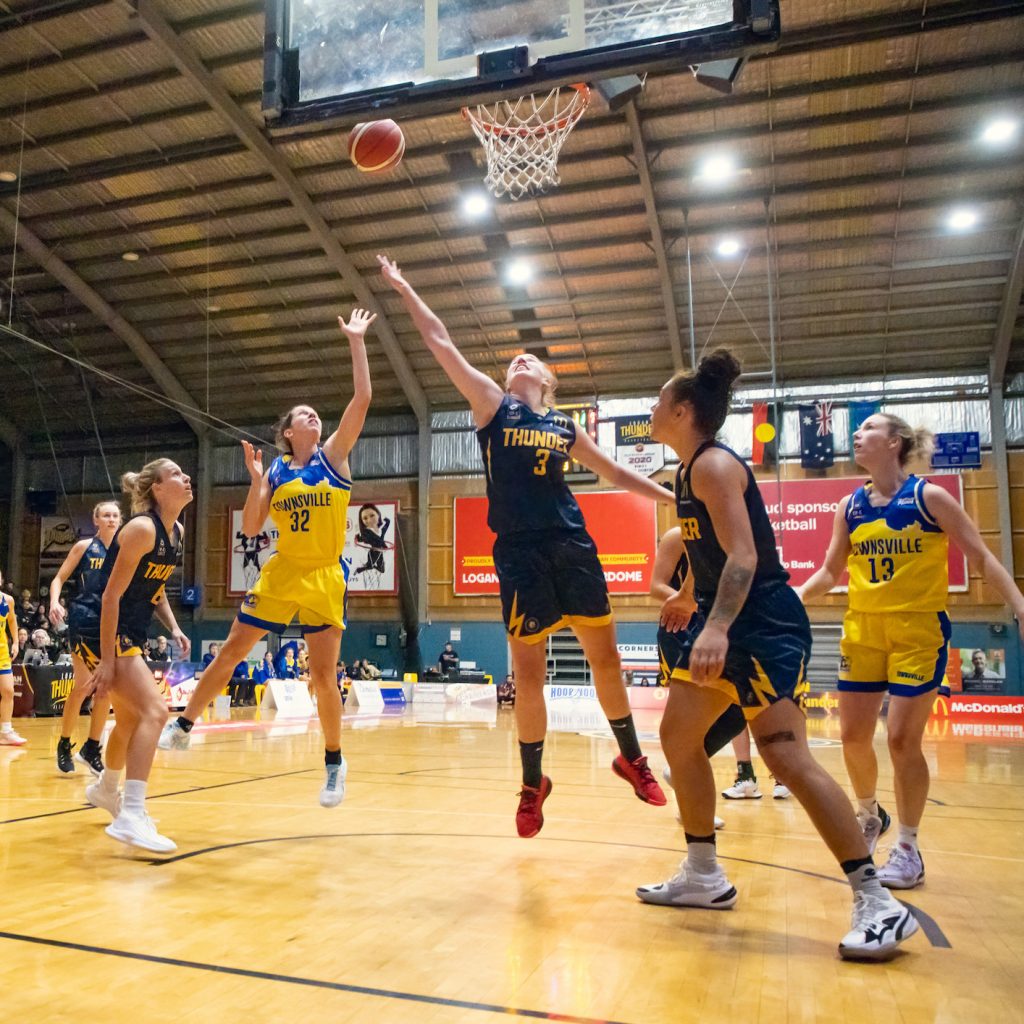 ROUND 4 of the National Basketball League (NBL)1 competition saw Townsville Flames/Heat and Rockhampton Cyclones/Rockets do the triple and play three games across the weekend for mixed results. We recap a big round of action.

An unbeaten clash between Logan Thunder and Townsville Flames opened up Round 4 of the NBL1 North women’s competition, and the result went the way of the Thunder, getting up in front of home fans with an 18-point victory. Despite Townsville’s strong start to the season, the Thunder won all four quarters in a dominant display, up by nine points at the half, then piled on 17-9 in the third term to end the contest, eventually taking home the 76-58 victory.

It was the first of three games for the Flames over the weekend, as Townsville continued their run on the road up the highway, defeating Ipswich Force by 30 points, then claiming a 20-point win over Gold Coast Rollers. Against the Force it was Reid (34 points, five assists, three rebounds and two steals) standing up shooting four of seven from long-range, whilst the likes of Cocks (18 points, 13 rebounds and six assists), Seebohm (16 points, eight rebounds, eight assists and two steals) and Mia Murray (16 points, four rebounds and three assists) all stood out. Amy Lewis (18 points, 12 rebounds, four assists and three steals) was the key player for the Force, as Catherine McGregor (five of nine from three-point range) hit 17 points and three rebounds in the loss.

Cairns Marlins continued their recent good form with a third consecutive win, this time over Rockhampton Rockets by seven points on Friday night. The Marlins struggled early against the winless Rockets, falling six points behind at quarter time, before dominating the next two quarters to score 52-33 and hit the front by 13 points. Rockhampton roared to life in the last term, outscoring the Marlins 23-17, but it would not be enough as Cairns triumphed 92-85.

Unfortunately for the Rockets, it was not a great weekend, suffering two other defeats to go 0-6 from the men’s and women’s clashes in Round 4. First up was a 17-point loss to USC Rip City as Isaih Tueta (29 points, 15 rebounds and eight rebounds) tore the Rockets apart with support from the long-range shooter Eric McAlister (26 points – six of 12 from three-point range – eight rebounds and two blocks). Young put up 23 points, 12 rebounds, four steals and two assists in the loss, while Wright managed the 16 points, six rebounds and three assists, and Jared Blanchard had a double-double of both 10 points and rebounds.

The final loss of Round 4 for the Rockets was the biggest of the lot, going down to Sunshine Coast Phoenix by 42 points. Taken apart in the first three quarters to by 40 points down at the final break, the Rockets fought to the line to only lose the last term by two, and go down 115-73. Darnell Robateau had one of the best performances of the season, knocking down a triple-double of 27 points – three of four from three-point range – 11 rebounds, 15 assists and two steals in just 30 minutes of court action. Nelson Kahler (24 points, 11 rebounds and three assists), Oscar Cluff (21 points, five rebounds, three steals and two blocks) and Jamaal Robateau (16 points, seven rebounds, six assists and two steals) also hit double-figure points in big efforts. Young top-scored for his side for the third time over the weekend with 19 points, 12 rebounds and six assists. Wright (14 points, three rebounds) also tried hard for the losers.

In other results, Townsville Heat bounced back from a 15-point loss to Logan Thunder on Friday night to post back-to-back wins over Ipswich Force (19 points) and Gold Coast Rollers (six). Brisbane Capitals got past South West Metro Pirates in a tight eight-point affair, whilst Southern Districts Spartans knocked off Northside Wizards by 24 points.