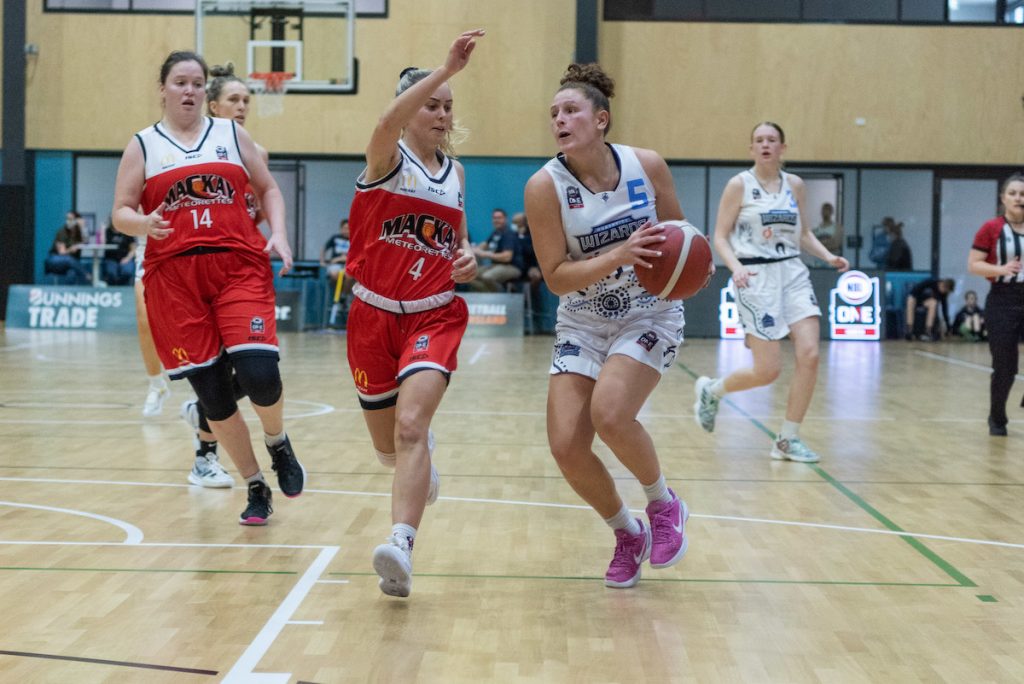 ROUND 9 of the National Basketball League (NBL)1 North played out over the weekend, with both the men’s and women’s matches providing plenty of intriguing results.

Townsville Heat prevailed in their Round 9 game against the Cairns Marlins, thanks to a final period shootout where everything was put out on the line. The third placed Heat was on fire in their dynamic performance last Saturday which was set on track by an exciting opening. Right from the get-go, Townsville won the jumpball thus taking full control of the game. Cairns had multiple opportunities to overtake the lead, eventually snatching it from Townville’s grasp in the second period.

The tables had turned as the game headed to halftime, with the second period now in favour of the Marlins who had the Heat hot on their tails for precious points and the win. Both teams had their own reasons to get the win. The heat needed to keep their third spot ladder position secure, whilst Marlins’ aiming to improve better on their current position of ninth. By third period, it seemed to be anybody’s game as the Marlins let slip of the lead just as fast they got it. A string of shots were fired from both ends yet it seemed the Heat had gotten back into the game. Although a handful of missed shots had encompassed Townsville’s third period, that did not seem to distract the side away from the lead in the meantime.

Remaining poised and steady in the fourth period were Townsville who continued to hold the lead against their opponents by three points. A three-point shot in the opening reignited the Heat, helping them power through the remaining seconds of the final term. Although there were promising attempts by the Marlins to conjure up chances, it came too late with the Heat sealing a win this round, 82-79.

Sam Froling stunned on the court for Townsville as he produced an impressive 36 points on the night, as well as 24 rebounds and four assists. Teammate Peter Crawford also had a decent run in 25 minutes of gametime, managing 14 points and four rebounds. Keegan Tudehope was a vital part of his side’s win as a result of 10 points, five assists and two rebounds.

Over at the Cairns Marlins camp, Majok Deng was among the best players. In almost half an hour of play, he scored 27 points along with six rebounds. Mirko Djeric captivated with a classy 22 points, six assists and two rebounds. Rounding out the best on court for Marlins was Anthony Fisher who proved significant for the side with 17 points, five rebounds and five assists.

In other games, Mackay Meteors took out several wins, beating the Brisbane Capitals by 32 points, the Southern Districts Spartans by 19 and the Northside Wizards by 33. It was not a day to remember for the USC Rip City, who fell short of ladder leaders Logan Thunder. USC also fell short to Red City Roar as they went down by 18 points. The Gold Coast Rollers overthrew the South West Metro Pirates by six points. Capping off a thrilling Round 9, Ipswich Force found success going up against South West Metro Pirates.

In a tight one-point win against the Mackay Meteorettes, the Northside Wizards achieved their third win of the season. What initially begun as a low scoring affair quickly became encompassed by 2-point and free throws, helping to intensify the opening term as the minutes ticked by. As both teams seemed determined for the win, the Meteorettes took the lead to cap off a thrilling opener.

Mackay took immediate control of the game collecting the first two points of the second term, with the fourth placed side looking to add another win to their season that sat on seven prior to Sunday’s win. Northside respond immediately with a three-point jump shot being made. A free throw levelled the scores for the first time in the game at 40-all but was quickly shot down by Mackay who powered throughout the third term whilst tightly clenching the lead.

Still in with a chance at the game the Wizards were hard on the heels off Mackay, throwing a multitude of two-point shots and three-point jump shots at basket. Yet it struggled to impact a dominant Mackay Meterorette front. As the fourth and final term quickly approached the scores were 65 – 63 heading into the last period. Both teams scrambled to get across the line with the win.

Following a back and forth of scores being levelled and then overtaken during the last term, the scores were levelled for the final time before a point was added to the board for the Wizards as a result of a free throw being made. As the seconds passed, Wizards made another free throw. But a final shot at the basket from Mackay saw them fall short at the very last second when an attempt at a three-point jump-shot failed.

Courtney Woods made her presence clear for the winning side off the back of an important performance finishing with 26 points, eight rebounds and four assists. Tiana Mangakahia followed on from her teammate as another valuable asset for the Wizards with 20 points. In half an hour of game time, Mangakahia registered six assists and two rebounds. Regan McCarty had a decent performance as her side overthrew the Meteorettes. Her 19 points, five rebounds and three assists helped to assert her spot as one of the Wizards’ best this week.

The other scores of the round saw a mix bag of results. Despite the loss against the Wizards, the Mackay Meteroettes came out on top against their match up with the Brisbane Capitals by six points. Logan Thunder got the win against USC Rip City by 17 points. South West Metro Pirates were not lucky in their game against the Gold Coast Rollers. Neither were Red City Roar who lost against USC Rip City. Logan Thunder had better success went they went up against the Sunshine Coast Phoenix as they won by 55 points. Southern District Spartans won out against Mackay Meteorettes, as did the Townsville Flames against the Cairns Dolphins. Meanwhile, the South West Metro Pirates had a day to forget when they lost against Ipswich Force.