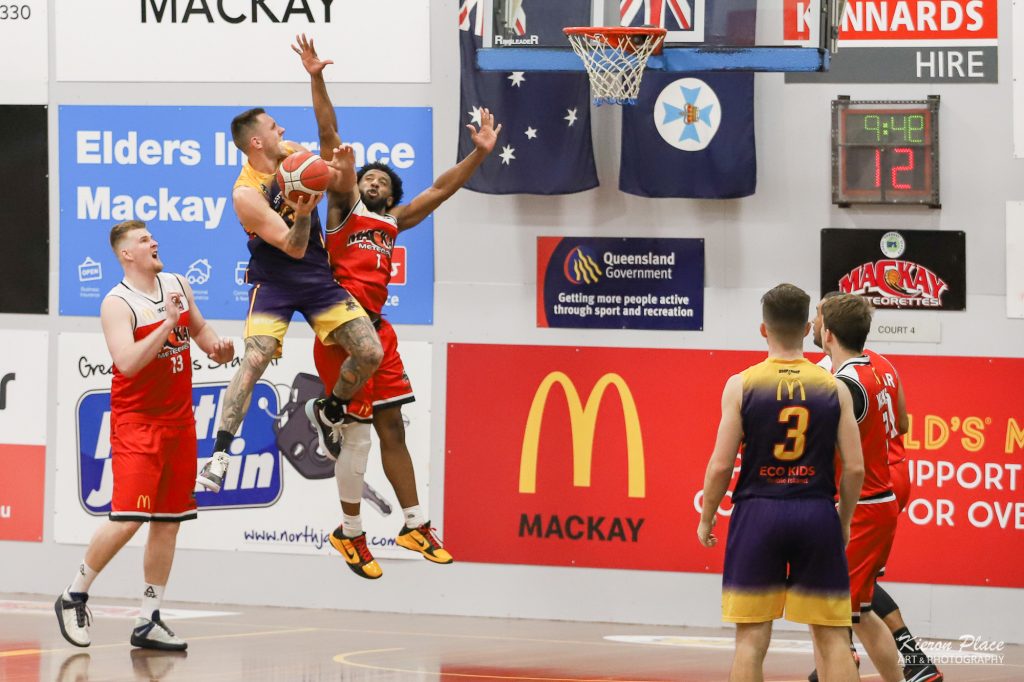 ROUND 6 of the National Basketball League NBL1 North was a cracker with big results in both the men’s and women’s leagues. It was a close shave between USC Rip City and Cairns Marlins with the former sneaking home with a narrow one point win in the men’s while in the women’s there were a number of blowout matches.

The Mackay Meteors displayed impressive gameplay throughout the four periods, foreshadowing no doubt what would have been a much-desired win at Mackay Basketball Stadium. From early in the first period, the Meteors took advantage of the game thanks to a quick two-point shot. However, the Southwest Metro Pirates responded back moments after with a two-point shot, signalling what would be thrilling game. An intense first period saw both teams shoot a string of two-pointers and triples before a time-out was called half-way in the first by the Pirates. The short break in play saw the Meteors continue to hold the lead despite a number of missed shots. Despite this, the Meteors held their composure as they headed towards the end of the first period 33-22 in their favour.

Pirates continued to trail but showed determination as they slowly crawled their way back into the game. Yet they struggled to level the scores with their game encompassed by highlights that included a dunk and a jump ball win to the Meteors. Consequently, Southwest Metro Pirates once again continued to hold the lead as their opponents missed attempts which seemed to cost them their chance to overturn the result as the first half concluded. Heading into the beginning of the third period, scores were 56-37 in favour of the Mackay Meteors, however an immediate two point shot from the Pirates changed it to 56-39. The third period saw yet another time-out called from the Pirates as well as both sides ultimately gaining fouls against their players. A free-throw from the Mackay Meteors rounded out the third period to boost their lead 80 – 57.

The Meteors continued their dominance in the final term opening the fourth period with a two-pointer, repeating several minutes after this.  The Pirates had several significant moments nailing all free-throws and sinking a three-pointer but the Meteors still remained ahead of the pack and were unwilling to give up the lead. Despite Southwest Metro’s best efforts and final quarter push it was not enough to stop a fierce Mackay side as they took out the win 103-92. Mackay’s impressive performance was helped by Emmanuel Malou, who was crucial for the side with 25 points and 10 rebounds. Harrison Froling also was important in the win with 19 points alongside Hayden Wick’s respectable 15 points. The Pirates showed promising signs through the likes of Mitch Creek’s 24 point and 19 rebounds performance, with Kai Woodfall and Ryan Vines both managing 20 points during the game.

Ipswich Force (70) defeated by Sunshine Coast Phoenix (72)
A tight contest between Ipswich Force and Sunshine Coast Phoenix, saw the Sunshine Coast just snag the game by two points. The game saw a quiet run for both teams as points were yet to be put onto the board, until Sunshine Coast delivered with a two-pointer eight minutes into the opener. Two three-pointers came from Ipswich, helping them gain the lead 24-13. Ipswich dominated the scoreboard throughout the first quarter with Sunshine trailing despite scoring in the final minutes of the term.

Securing the lead early on helped Ipswich to continue to dominate the scoreboard in the second period following on from a missed shot from the Sunshine Coast. Phoenix opened up with a handful of two-pointers yet still remained to trail behind Ipswich’s strong force. Ipswich still clenched the lead through the remainder of the second term as a result of highlights such as two three-pointers and all free-throws being made helping them to slightly boost the score to 42-30. The third period saw a delayed response to the term, with neither team scoring until a three-point jump shot from Ipswich ended this. Despite Ipswich’s strong start in the first two periods, the beginning of the second half saw their lead slowly start to slip away with Phoenix seeming set to make a comeback into the game. A string of shots helped to tighten the margin to 59-53 going Ipswich’s way at the conclusion of the third period. The final period quickly rolled around, setting up the pace for what was to be a thrilling final term between both sides. Ipswich swung into action scoring the fourth period’s first points, yet Sunshine Coast quickly responded with a free-throw which levelled the scores for the first time at 67.

The final term saw a time-out called by the Sunshine Coast, but as a result of both three-throws helping the team secure the win by two-points. Kathleen MacLeod was a key part of Sunshine Coast’s win (16 points, 9 assists, 5 rebounds) alongside Amy Browne (14 points, 10 rebounds) and Caitlin Clancy (12 points). For Ipswich, Georgia Ralph was among the standouts scoring 24 points, as well as Amy Lewis who scored 18 points, 9 rebounds and 5 assists.