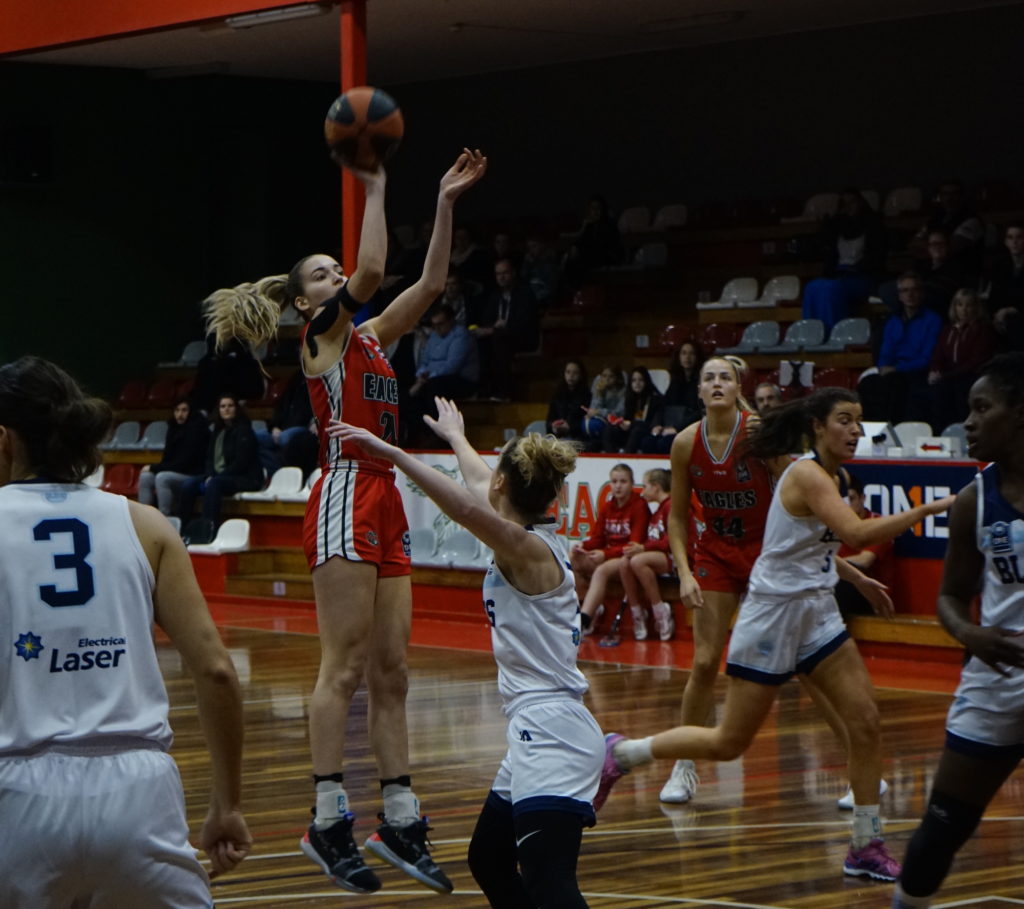 IN the mid-season break, Basketball Draft Central takes a look at each National Basketball League (NBL)1 team in both the men’s and women’s competition and will analyse how they have performed to date, some of their top performers, and the run home to see if they can make finals. Today we analyse the Diamond Valley Eagles with the men’s team still in contention for finals, while the women’s side has struggled thus far but still had some shining lights.

The negative win-loss ratio for the Eagles’ men’s side might not look great, but they are arguably one of the most unlucky teams, with their past four losses being a combined 27 points – less than seven points per game in defeat – and against some of the big hitters of the competition including Geelong Supercats. The darkest day was a 43-point smashing on the road to Albury Wodonga Bandits in Round 3 to put them 0-4 to start the season. Since then, the Eagles have won five of nine, and taking on the Bandits a month later, and only going down by six points. The narrow losses might hurt in the end, but the competitive nature of their performances would be really impressive for the fans. In terms of individual standouts, Logan Hovey has been the reliable man on court, averaging 17.8 points, 6.0 rebounds, 1.2 assists and 1.2 steals per game. Coming off the bench for the majority of his seven games, Anthony Odunsi averages the second most points, sinking 13.0 points, 4.1 rebounds, 2.9 assists and 1.0 steals per game. Two other mainstays in the starting line-up and have had massive impacts off the boards are Ben Allen (10.8 points, 6.8 rebounds and 2.4 assists per game) and Liam Thomas (8.8 points, 7.9 rebounds, 1.8 assists, 1.2 blocks and 1.1 steals per game) who can both play through the centre position.

Of their last seven games, the Eagles will arguably need six wins to secure a finals spot, which is not easy with a road trip to top-of-the-table Ballarat Miners backed up by a home match against second placed Nunawading Spectres in Round 12 looking like a make-or-break weekend. They are the only sides in the run home in the top eight, although all the sides they play are around the Eagles’ mark and also searching for a finals spot, ensuring tight contests and high intensity.

The Eagles’ women’s season is done and dusted in terms of finals hopes, having not won since April 6, when they triumphed over Basketball Australia Centre of Excellence. Since then they have dropped 11 on the trot, some of which have been unlucky losses. They have maintained a percentage that is comparable to the other bottom four sides, and the goal would be to finish off the season strongly and try and avoid the wooden spoon. Anneli Maley has been the one consistent standout player every week, averaging 19.3 points, 15.1 rebounds, 2.3 assists and 0.9 steals per game this season. The other two who have assisted her in eight and 10 games respectively are forward Hope Terdich (15.4 points, 6.3 rebounds, 1.0 assists and 1.0 steals per game) and center Shelby Chesiek (11.2 points, 7.3 rebounds, 1.8 assists, 1.2 steals and 1.1 blocks per game).

In the run home, the Eagles play three of the other four bottom five teams, as well as twelfth placed Ballarat Rush. The team has its opportunities to jump off the bottom and move up a few spots if they can take down a few of the other lowly based sides, with the percentage so even between the teams.