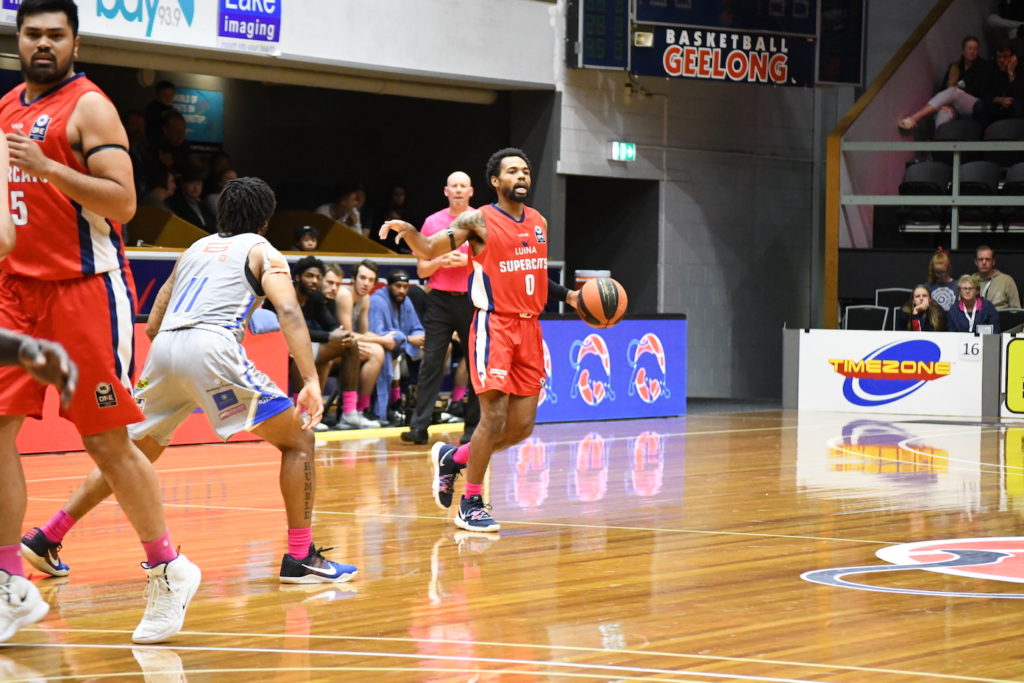 GEELONG Supercats’ National Basketball League (NBL)1 men’s side has survived a thrilling one-point contest with Albury Wodonga Bandits, leading the entire game before being forced to survive a massive Bandits comeback in the final term. The Supercats led by as much as nine points at the final break, but a 34-26 final term in favour of the visitors gave the home team an almighty scare before the buzzer sounded with the Supercats in front, 104-103. Demarcus Gatlin was the star, falling narrowly short of a triple-double in the win, scoring 32 points, 14 rebounds – 10 offensive – and eight assists as well as three steals. Lewis Thomas also had 23 points, eight rebounds and six assists, while Nick Owusu was also big off the boards with nine rebounds – seven defensive, five assists and 11 points. For the Bandits, Ken-Jah Bosley continued his scoring spree with another 30 points, five rebounds and two assists, while Deba George sank 24 points, three rebounds, four assists and two steals.

Unfortunately for the Supercats, they could not replicate the effort in their second game of the round, going down to Bendigo Braves by 16 points. The Braves dominated in the first and third quarters, being the ultimate difference between the two sides. Ray Turner sank 19 points and had a massive 17 rebounds – 11 defensive, four blocks and two steals to be a thorn in the Supercats’ side, while Deonte Burton was also prominent for the Braves, scoring 18 points, seven rebounds, six assists and two blocks. Daniel Hansen (17 points) and Matthew Barlett (14) were the other Braves to reach double figures. For the Supercats, Thomas was strong with a team-high 19 points, six rebounds and three assists, while Owusu had 14 points, six rebounds and two assists. Gatlin was quiet by his own lofty standards, finishing with 13 points, seven rebounds and five assists, but still had five steals.

In the Bandits’ other game, they got up over Diamond Valley Eagles, breaking away in the final term to win by six points. Bosley was strong in the forward half once again, piling on 32 points, six rebounds, four assists and two steals, while George had 24 points, four rebounds and three assists. Torren Jones was the other player who stood tall with 20 points and 13 rebounds in the win. For the Eagles, Anthony Odunsi had 22 points and four assists, while Logan Hovey (20 points) and Joel Spear (17) were the other two big points scorers. The most influential rebounder was Liam Thomas with a match-high 17 rebounds, 11 of which were off the defensive board.

The loss was the second for the Eagles over the round as their slow start to the season continued, going down to Melbourne Tigers by nine points. Dane Pineau was the dominant scorer for the Tigers with 23 points, 15 rebounds and five assists, while it was to no-one’s surprise that Nic Pozoglou who picked up a double-double courtesy of 21 points and 12 rebounds. For the Eagles, Thomas had another 10 rebounds, as well as 10 points, three steals and three blocks. Darcy Harding had a team-high 15 points in the defeat, picking up seven rebounds and three assists as well, while Hovey had 13 points and nine rebounds. Meanwhile Melbourne’s second home win of the round came at the expense of Ringwood Tigers, recording a 97-82 victory. Mike Wells was the dominant shooter with 23 points, but it was Pineau (14 points, 17 rebounds, six assists and two blocks) and Pozoglou (20 points, six rebounds, four assists and three blocks) who were among the most impressive. For the Hawks, Adrien Sturt had 16 points and 10 rebounds in a double-double, while Matthew Fennell‘s 10 points and 11 rebounds was enough for him to collect one too. Jacob Gibson had an equal team-high 16 points, as well as three rebounds and three assists.

Ringwood was another side to suffer two defeats on the weekend, also going down to Waverley Falcons in a 97-86 loss at The Rings. Joey Miller did all he could with 26 points, four rebounds and two assists, while Gibson (17 points, five rebounds) and Fennell (seven points, nine rebounds and five assists) were strong around the court. For the winners, Deondre McWhorter was terrific, picking up 28 points, 10 rebounds, four assists and two blocks, while Dylan Travis had 27 points, nine rebounds and five assists to comprise a damaging duo on court for the Falcons. In the Falcons’ other win, they got up over Basketball Australia Centre of Excellence (CoE), finishing 96-69 ahead at the final buzzer. Travis was again busy with 23 points, four rebounds, seven assists and three steals, while McWhorter was huge off the boards with 12 rebounds and 16 points. Bennie Lewis (12 points, five rebounds and five assists) and Michael Harper (15 points) were others who had no trouble finding the basket. For the CoE, it was left up to Alex Ducas again as the shooter put together an 18-point, three-rebound performance, while Josh Bannan was the other double-figure scorer with 11 points and three rebounds. Josh Giddey and Will Tattersall had seven rebounds apiece in the loss.

In the CoE’s other defeat across Round 6, they went down to Knox Raiders, 82-72. Ducas was the lone dominant shooter, posting up 31 points at 64.7 per cent from the field, as well as having two rebounds, while Josh Kunen managed 11 rebounds. Hunter Goodrick (five points and seven rebounds) was the other one strong off the backboard. For the Raiders, James Hunter top-scored with 16 points and seven rebounds, while Cadarian Raines had 13 and nine in the win. Adam Thoseby (15 points, four rebounds and four assists), Damon Heuir (15 points, three rebounds and three steals) and Mike Rose (12 points, seven rebounds and three steals) were others who stood up in the win.

The Hobart Huskies tipped off the Mother’s Day weekend in style with a nine-point win over Dandenong Rangers. Tad Dufelmeier continued his great form with 24 points, six assists and two rebounds in the 96-87 win, while Jalen Adams was strong again with 19 points and six rebounds. Jacob Richards (15 points, four rebounds and six assists) and Matthew Young (13 points) were the other Huskies to reach double-figures. For the Rangers, Tim Lang led the way with scoring, sinking 19 points, six rebounds and two steals, while Keil Leaupepe scored 18 points, nine rebounds and four steals. The other Tasmanian game was better for the Rangers, storming to a 33-point win over North West Thunder. Sam Froling stood up in the win for the Rangers, posting 21 points, three rebounds and three steals, while Lucas Barker had 20 points, five rebounds, four assists and three steals. Leaupepe was good off the boards with a massive game-high 16 rebounds and 16 points, while Lang had 11 points and six rebounds. For the Thunder, Tre Armstrong was busy with 23 points, two rebounds and five assists, while Jordan Bowling had 20 points, two rebounds and two assists.

The only team that remains undefeated in the competition is Ballarat Miners, stamping their authority over previous ladder leaders, Kilsyth Cobras and handing the Cobras their second consecutive loss. The Miners only led by two at the final break, but blew the margin out to 16 with a 31-17 last term. Jerry Evans Jr shot 22 points and five rebounds in the 87-71 victory, but it was Josh Fox who was best on court, snaring 18 rebounds to go with his 19 points in a terrific effort. Kuany Kuany (20 points, four rebounds) and Sam Short (16 points, five assists and four rebounds) were the other two Mineers to stand out in the win. Isaac Turner (20 points) and Peter Hooley (12 points, nine rebounds) were the two key scorers for the Cobras in a disappointing loss. In Ballarat’s other victory, they accounted for Eltham Wildcats easier, winning all four quarters on their way to a 104-80 win. Evans Jr was again busy with 14 points and five rebounds, while Deng Acuoth‘s rebounding continued with eight rebounds to go with his 14 points. Kuany topscored with 15 points and five rebounds for the Miners, while Fox had 13 points, eight rebounds and 10 assists, narrowly missing out on a triple-double. For the Wildcats, Simon Bradbury was the best with 16 points and nine rebounds, while Ben Waldren also managed 16 points.