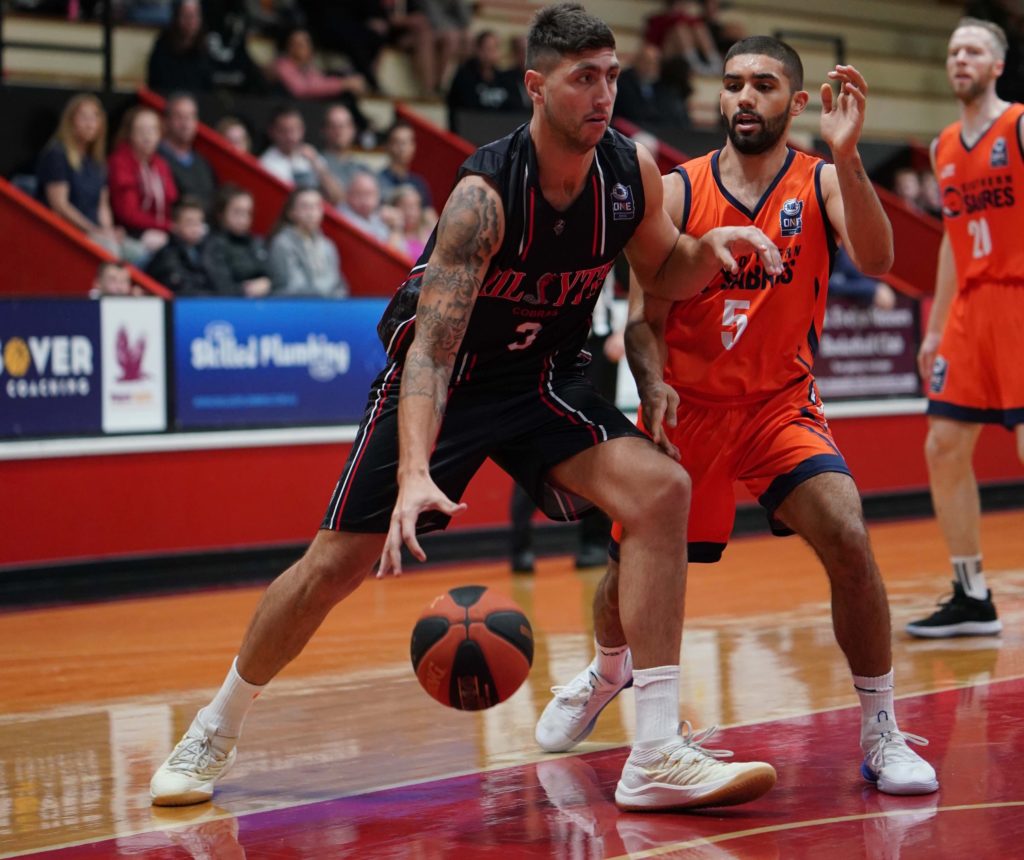 SOUTHERN Sabres might have only won their second game of the National Basketball League (NBL)1 Men’s season over the weekend, but it was the best win of the season, topping the previously undefeated Kilsyth Cobras to leave the home crowd stunned. The Sabres led by a point at quarter time and three points at half-time, but many expected the top-of-the-table Cobras to hit back in the second half. Instead, it was the Sabres who put the foot down, scoring 26-17 in the third term, then winning a shootout in the final term, 35-33 leading to a remarkable 106-92 victory. David Barlow was sensational with a double-double, posting 25 points, 13 rebounds and three assists, while Nicholas Gabsch stepped up for 18 points and four rebounds, and in his first round of games, Jamie Batish finished with 15 and four. Sam McDaniel (14 points, three rebounds and three steals) and Jaden Weldon (13 points, four rebounds, three assists and two steals) were also prominent in the win. For the losing side, Peter Hooley posted 24 points, eight assists, three rebounds and two steals, while Tohi Smith-Milner was massive off the boards with 14 rebounds and 17 points. Ben Ursich was also prolific with 19 points, six rebounds and two assists, as was Owen Odigie (15 points, five rebounds and three steals).

Earlier in the round, Melbourne Tigers got the better of Southern Sabres, recording a 12-point win in overtime. The Sabres started strongly to lead by three points at quarter time before the Tigers hit back to regain control and head into the main break with a nine-point advantage. The Sabres again wrestled back control to only trail by five at the final break. The Sabres kept coming and drew level at the final buzzer, only for the Tigers to wake from their slumber and piled on 16-4 in the first overtime for a 113-101 win. Barlow did all he could with another double-double scoring 29 points, 11 rebounds and three assists, while McDaniel was equally as damaging with 25 points, 11 rebounds and six assists. The winners shared the points around with Dane Pineau having a whopping 22 rebounds to go with 21 points, as Michael Luxford had a comparably modest 14 rebounds to go with his 21 points, five assists and five steals, while Mike Wells also posted 20 points.

On Friday night, Bendigo Braves proved too good for Hobart Huskies, winning the final three quarters to record an 89-73 victory. The Braves trailed by a point at quarter time, but powered home in front of their home fans to enjoy a 16-point win. Ray Turner was sensational with 30 point and 11 rebounds, while Tanner Rayner scored 15 points and had seven rebounds. Also prolific on the boards was Mathiang Muo who finished with 10 points, nine rebounds and four assists. For the Huskies, Jalen Adams was his typical self, sinking 25 points and helping himself to 12 rebounds and two steals on the night. Matthiang Muo won the battle of the Muo’s with 18 points, nine rebounds, three assists, three blocks and one steal.

The Huskies bounced back from the Friday night loss with a 19-point win over Ringwood Hawks on Saturday. Leading early and then challenged in the second term, the Huskies put the foot down in the third quarter, piling on 34 points to 17 to lead to a 106-87 victory. Adams was terrific with 31 points, 12 rebounds – 10 defensive – and six steals, while Tad Dufelmeier made his debut, posting an eye-opening 30 points, five rebounds and four assists in the win. For Ringwood, Matthew Fennell led the way with 17 points, 13 rebounds and four assists, while Jacob Gibson finished with 16 points and four rebounds.

Southern Sabres were not the only side to cause an upset, with Knox Raiders handing Nunawading Spectres their second consecutive loss. The Raiders were on fire from the word go, dominating in three of the four quarters, scoring at least 24 points in each of those terms on their way to a 17-point win. It was just the Raiders’ second win of the season as three players scored at least 20 points in the win. Damon Heuir (22 points, three rebounds and four assists), Cadarian Raines (22 points, seven rebounds and three assists) and James Hunter (20 points, four rebounds) were all dominant offensive players on the night. For the Spectres, Jack Saunders and Simon Conn both sank 15 points, as Conn also had seven rebounds and four assists.

The only team remaining undefeated in the men’s competition is Ballarat Miners and they certainly made a statement in Round 5. Coming up against fellow title contenders Albury Wodonga Bandits, the Miners completely obliterated them in front of the Bandits’ home crowd as they ran out 63-point winners – the largest winning margin of the season. The Miners had a remarkable seven players reach double figures, with Deng Acuoth the best big man, posting 21 points, recording 15 rebounds and an unbelievable 11 blocks, denying the Bandits time and time again. Jerry Evans Jr was also impressive with 23 points, six rebounds, two assists and three steals, while Kuany Kuany was the other big points scorer, leading the way with 24 points, eight rebounds and two assists.

In the other results, Eltham Wildcats knocked off Dandenong Rangers by 19 points, Diamond Valley Eagles handed Ringwood Hawks a second loss over the weekend in an 81-74 triumph, while Geelong Supercats proved too good for Waverley Falcons in a 92-62 win.