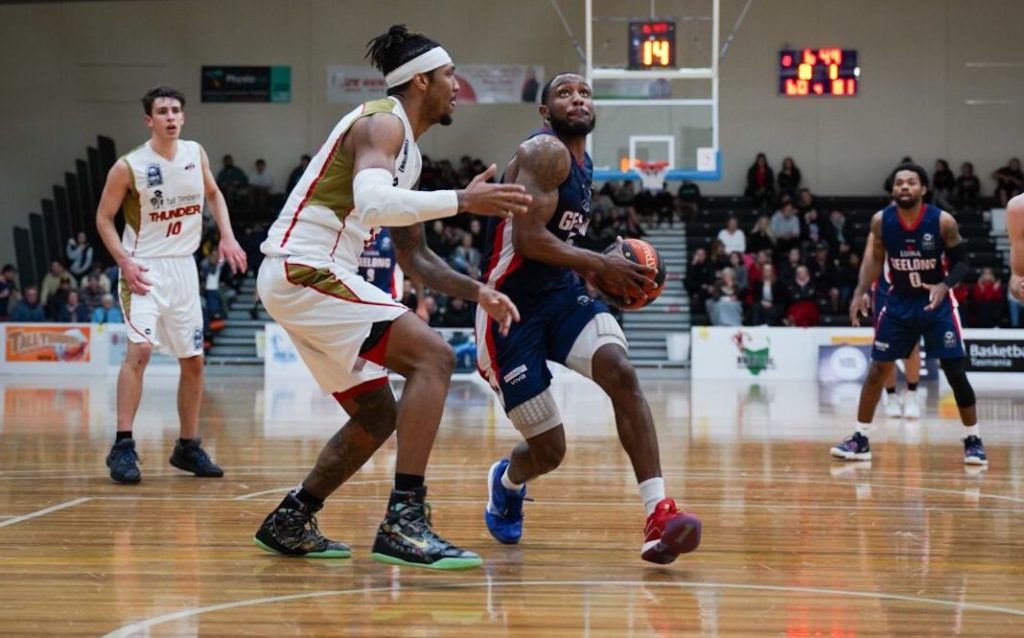 GEELONG Supercats, Nunawading Spectres and Melbourne Tigers all maintained their winning streaks with important wins as Ballarat Miners slipped up against the in-form Frankston Blues, and now sit just one win clear of the Spectres in the National Basketball League (NBL)1 men’s competition. The Spectres travelled up to the border to face Albury Wodonga Bandits and came home with the win after a dominant first half put them 19 points clear at the main break. The home side fought back to cut it to a 13-point deficit at the final break, but the Spectres steadied to win by 18 points, 97-79. Dain Swetalla was the standout player with 34 points, 11 rebounds and five assists, while Tom Wright (12 points, five rebounds and four assists) and Andrew Steel (10 points, eight rebounds) were others who stood tall for the visitors. Emmanuel Malou picked up a double-double with 20 points and 12 rebounds, as did Torren Jones (14 points, 11 rebounds), but the creativity up the forward half was left to Deba George (16 points, seven assists) and Ken-Jah Bosley (15 points, five assists and six rebounds) who combined for 12 of the team’s 14 assists.

The Bandits also suffered a loss at the hands of the red-hot Melbourne Tigers on Sunday, going down by 13 points at MSAC. The Bandits led by two points at quarter time, but it was all the Tigers after that, running out 104-91 winners. Nic Pozoglou continued his great form this season with a massive 34 points, 12 rebounds – eight offensive – and four assists, while Mike Wells (17 points, three rebounds, four assists and two steals) and William Hickey (15 points, eight rebounds, two assists, two steals and three blocks) were also impressive. For the Bandits it was a two-man show with Jones and Bosley doing all the damage. Jones had a massive 37 points and 21 rebounds – 12 defensive and nine offensive – while Bosley finished with 21 points, 10 rebounds and five assists in the loss.

Geelong Supercats had a fruitful trip down to Tasmania, recording back-to-back wins over Hobart Huskies and North West Thunder on Friday and Saturday. The Supercats recorded a nice 11-point win over the Huskies on Friday night, controlling the second term on their way to a 81-70 victory. The points were shared around but it was Ma’alo Hicks who caught the eye on the night thanks to 12 points, 18 rebounds and four assists, while Demarcus Gatlin (15 points, nine rebounds, five assists and two steals) and Lewis Thomas (12 points, nine rebounds, two assists and one steal) were prominent for the winners. Jacob Richards (14 points, three rebounds) top-scored for the Huskies, while Jalen Adams had nine points and seven rebounds, one less rebound than Zachary White who also picked up nine points, as well as three assists. In Geelong’s nine-point victory over the Thunder, Gatlin went on a spree, scoring 39 points and taking home four rebounds and six assists, while Thomas picked up a double-double with 12 points and 15 rebounds – 14 defensive. Hicks (11 points, nine rebounds) and Liam McInerney (10 points, seven rebounds) were also impressive off the boards. For the Thunder, Tre Armstrong (18 points, seven rebounds and three assists), Nick Banyard (18 points, six rebounds) and Paul Campbell (10 points, 11 rebounds) all showed strong signs in the tight loss.

Ballarat Miners had a mixed weekend with the top side downing Ringwood Hawks, before a surprise loss to Frankston Blues. In the big 22-point win over the Hawks, Ballarat won every quarter in a convincing performance as Kuany Kuany picked up a game-high 23 points as well as six rebounds. Deng Acuoth was superb off the boards with 16 rebounds and four assists, while Marqueze Coleman had 21 points, three assists and two steals. For the Hawks, Matthew Fennell continued his good defensive work with 20 points, seven rebounds and two blocks, while Jacob Gibson had 20 points, four rebounds and two assists, while Joey Miller (14 points, five rebounds and nine assists) was creative. In the defeat to Frankston, it was a 52-41 first half that caught the Miners off guard and while they managed to cut the deficit to seven points by the final break, could not quite get the win. Josh Fox was strong for the losing side with 18 points and 11 rebounds, while Coleman had another 16 points as well as seven rebounds, three assists and two steals. For the Blues, Damon Bozeman was the star shooter with 27 points and four rebounds, while Majok Majok and Najeal Young shared 18 points and 19 rebounds in a superb team effort.

The Hawks did pick up a surprise win over the Braves however running out 74-68 winners on the back of a massive 23-13 last term having trailed at every break. Fennell had a big game with 14 points, six rebounds, four assists and two blocks, while Adrien Sturt had 15 points, seven rebounds and two blocks. Ray Turner was the standout player on the court in Bendigo’s defeat to the bottom two side, posting up 25 points, 16 rebounds, three assists and three blocks, while Matthiang Muo was also solid with 22 points and eight rebounds. The Braves’ loss came after a comfortable 27-point win over last placed Southern Sabres. Muo was busy once again with 25 points, five rebounds and two assists, while Turner had another all-round game, posting 15 points, eight rebounds, two assists and two steals. Nicholas Gabsch was the star for the Sabres, finishing the match with 22 points and five rebounds. Meanwhile Frankston’s upset win over Ballarat followed a shock loss to Diamond Valley Eagles, going down by 13 points to break their winning streak. The Eagles were in control for most of the contest after half-time, posting 48 points to 36 in the 99-86 vicotry. Logan Hovey led the points total with 25, as well as five rebounds for the Eagles, while Ben Allen had a double-double with 20 points, 13 rebounds and four assists. Anthony Odunsi (22 points, five rebounds, six assists and four steals) was the other prominent player for the winning side. Majok (18 points, 12 rebounds) and Young (eight points, 10 rebounds) were again the main Frankston rebounders, while Igor Hadziomerovic top-scored for the Blues with 17 points.

Another side that had mixed results over the weekend was Kilsyth Cobras, going down in a tight five-point loss to Eltham Wildcats, before posting an easy 33-point win over Waverley Falcons. The Cobras were on the back foot early with an 11-point quarter time deficit and while they managed to peg their way back, could not get in front. Geremy McKay was best-on for the Wildcats, posting 20 points, nine rebounds and four assists, while Josh Sykes (16 points, nine rebounds and three blocks) was prominent again, as was scorer Adam Doyle (17 points, four assists). For the Cobras, Chris Patton was the standout player with 25 points and 12 rebounds, while Tohi-Smith Miller was the other player who impressed with 12 points and eight rebounds, one less rebound than Owen Odigie who picked up seven points and nine rebounds. There was no slow start against the Falcons, with the Cobras putting the result to bed by half-time and leading by as much as 37 points at the final break. They shared the points around with Sean MacDonald leading the way with 19 and three assists, while Patton had 13 points, 12 rebounds and four assists. Odigie also had 12 rebounds to go with his nine points and three steals. In the other game of the round, Dandenong Rangers got the points against Knox Raiders, coming from behind to post a 81-76 win. The Rangers led by 17 points at quarter time but that had evaporated over the next two quarters as the Raiders led by seven at the final break. Just in time the visitors picked up and scored 22 points to 10 in the last term to secure a relieving five-point win. Dexter Kernich-Drew top-scored with 17 points, but it was the rebounding work of Sam Froling (15 points, 10 rebounds, three assists and two steals) and Tim Lang (eight points, 11 rebounds and three assists)that was most impressive. For the Raiders, it was Mike Rose (21 points, six rebounds and two assists) and Adam Thoseby (20 points, five assists) who did the bulk of the scoring, well aided by Cadarian Raines (14 points, eight rebounds, three assists and two blocks).