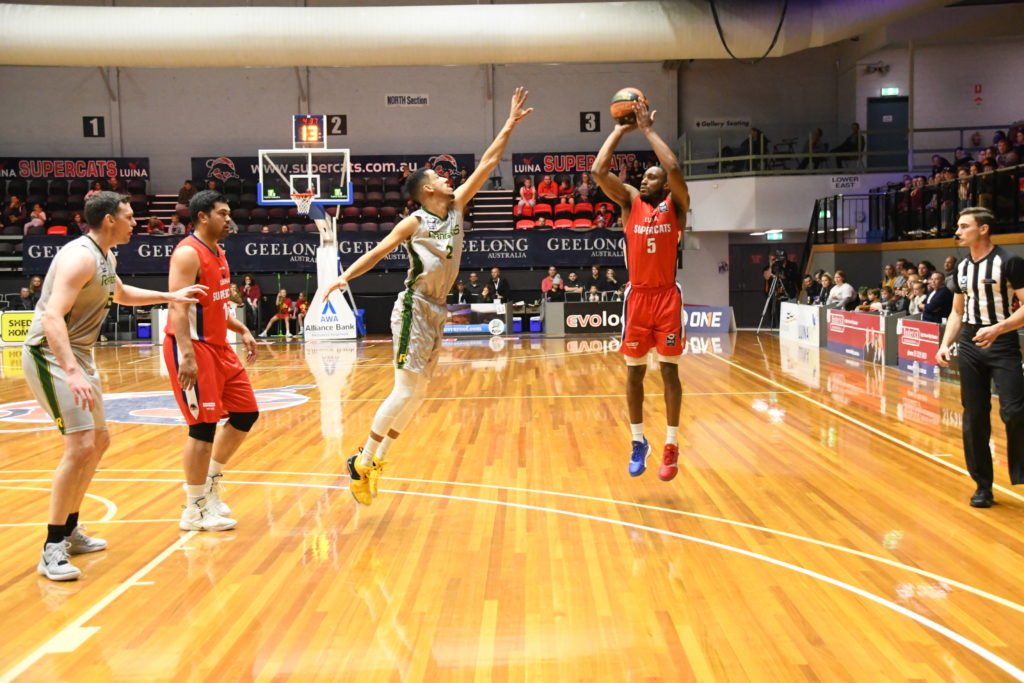 A COUPLE of one-point thrillers, including one to open the round was what National Basketball League (NBL)1 spectators were treated to in a big Round 8 of action. With 14 games played across three days, plenty of sides travelled around the southern parts of Australia, with Basketball Australia Centre of Excellence (CoE) playing three games, two in Victoria and one in Tasmania. They came away with two victories from their matches, and fell one-point short in the round opener against Diamond Valley Eagles. In that game, the Eagles took a two-point lead into half-time and then extended it to seven by the final break. The CoE roared into life in the final term, scoring 35 points to 29, but fell one point short of victory to go down, 83-82. Logan Hovey scored 29 points and had eight rebounds for the Eagles, while Ben Allen was equally impressive off the boards with 15 points and eight rebounds, as well as three assists and two steals. For the CoE, Alex Ducas again topscored with 16 points, also raking in nine rebounds, three assists and three steals. Josh Bannan and Tamuri Wigness also reached double-figure points, while Josh Kunen recorded seven rebounds for the game to go with his eight points.

In the two wins, the CoE knocked off Waverley Falcons by 28 points, before making the trip south to face North West Thunder in Tasmania, and came away with the points in a narrow 66-59 win. In the win over Waverley, Kunen had a team-high 16 points as well as four rebounds and three assists, while Blake Jones helped himself to 15 points and six rebounds. Hunter Goodrick was the star off the boards with 15 rebounds – 11 defensive. For the Falcons, Deondre McWhorter was again the standout with 19 points and five rebounds, while Bennie Lewis achieved a double-double with 15 points and 12 rebounds. In the victory over the Thunder, Goodrick had a best-on-court performance with a huge 23 points and 16 rebounds, while Will Tattersall was the other player to reach double figures, posting 12 points and four rebounds. For the home side, Paul Campbell recorded 15 points and nine rebounds, while Jordan Bowling and Joseph Chilcott both had 14 points and six rebounds.

The Thunder had also made the trip back home after a loss to Ballarat Miners on Saturday. The top-of-the-table Miners proved too good on their way to a 27-point win at home. Jerry Evans Jr continued his remarkable form this season with 26 points, 11 rebounds and three steals, while Deng Acuoth had 12 points and eight rebounds, and Marqueze Coleman picked up 18 points and four steals. For the Thunder, Bowling was the clear standout with 25 points, nine rebounds, two assists and two steals, while Chilcott was the other player to reach double figures with 12 points and four rebounds. In their second game for the round, Ballarat had no troubles dismissing Southern Sabres in a top-versus-bottom clash. The Miners raced to a 34-point lead by the final break, with both teams evenly matched in the last term with the game done and dusted. Coleman top scored with 22 points and six steals, while Evans Jr had 17 points and six rebounds. Acuoth finished with 13 points and seven rebounds for his efforts. Sam Short was the other standout player with 11 points, six rebounds, eight assists and three steals. For the Sabres, Nicholas Gabsch was by far the standout player, recording 24 points, nine rebounds and two assists in the loss.

After winning a thriller against the CoE, the Eagles were on the receiving end of a thrilling loss. They went down to Knox Raiders in a three-point defeat despite winning the second half by eight points. Hovey was the standout shooter with 25 points, nine rebounds, three assists and three steals, while Liam Thomas picked up a double-double with 11 points and 12 rebounds. For the winners, Mike Rose had a team-high 23 points as well as five rebounds, while James Hunter (11 point, 10 rebounds) and Cadarian Raines (10 points, 11 rebounds) both picked up double-doubles. Knox could not back up that winning form against Melbourne Tigers at MSAC however, going down by 13 points due to a second quarter fadeout. The Tigers scored 27-19 in the term, with each other quarter only being no more than two points difference. Mike Wells had 26 points, four rebounds, two assists and three steals, while Michael Luxford (25 points, six rebounds and eight assists) and Nic Pozoglou (18 points, 11 rebounds and five assists) were also standout players on the day. For the Raiders, Rose added another 27 points to his season tally, while Damon Heuir had 25, and Raines picked up 14 points, nine rebounds and four assists in the defeat.

The two sides chasing Ballarat Miners at the top of the table, Nunawading Spectres and Geelong Supercats both recorded solid wins, with the Spectres getting up against the Bendigo Braves 89-74, while the Supercats survived in a tight game over Dandenong Rangers. Dain Swetalla (26 points, eight rebounds) and Simon Conn (20 points, 10 rebounds) again led the way for the Spectres, while Bendigo’s Ray Turner posted 26 points, 16 rebounds and four wins in the loss. The Supercats had a big effort from Lewis Thomas (21 points, six rebounds, four assists and two steals), while Demarcus Gatlin (15 points, 10 rebounds) picked up another double-double and Ma’alo Hicks had 14 rebounds, four assists and two blocks in an impressive defensive effort. For the Rangers, Dexter Kernich-Drew led the way with 16 points as well as four rebounds and two assists, while Tim Laing registered a double-double with 15 points and 11 rebounds.

The other one-point thriller was Frankston Blues’ 101-100 win over Ringwood Hawks. The win catapulted the Blues into the top 10, with their fifth consecutive victory. The Blues looked in firm control with an eight-point lead at the final break, but had to survive a Hawks scare who scored 25 points to 18 in the final term, only to fall one-point short. Remarkably, the Blues only won the first term, but the convincing 32-19 quarter set them up for the game. Damon Bozeman had 28 points, nine rebounds and seven assists, while Majok Majok recorded a double-double with 17 points and 12 rebounds. For the Hawks, Jacob Gibson recorded 32 points, five rebounds, three assists, three steals and two two blocks, while Matthew Fennell finished with 24 points and five rebounds.

In the remaining games, Albury Wodonga Bandits got up with a much-needed win, defeating the out-of-sorts Kilsyth Cobras, 89-86. Deba George had a day out with 37 points, four rebounds, six assists and three blocks, while Torren Jones denied the Cobras time and time agin, with 17 points, 18 rebounds – 16 defensive – and two blocks. For the Cobras, Peter Hooley had 22 points, four assists and three steals. Dandenong Rangers also knocked off Bendigo Braves to bounce back from their loss to Geelong the day before, with Sam Froling (21 points, seven rebounds two assists and two blocks) the standout player, while Matthiang Muo (25 points, six rebounds) was impressive for the Braves. Meanwhile Eltham Wildcats grabbed the points against Hobart Huskies in an 11-point win. Josh Sykes was the star for the Wildcats, finishing with 18 points and being a constant threat at both ends, taking home 15 rebounds – 14 of which were defensive. For the Huskies, Jalem Adams picked up a double-double too, with 23 points, 10 rebounds, seven steals and two blocks.