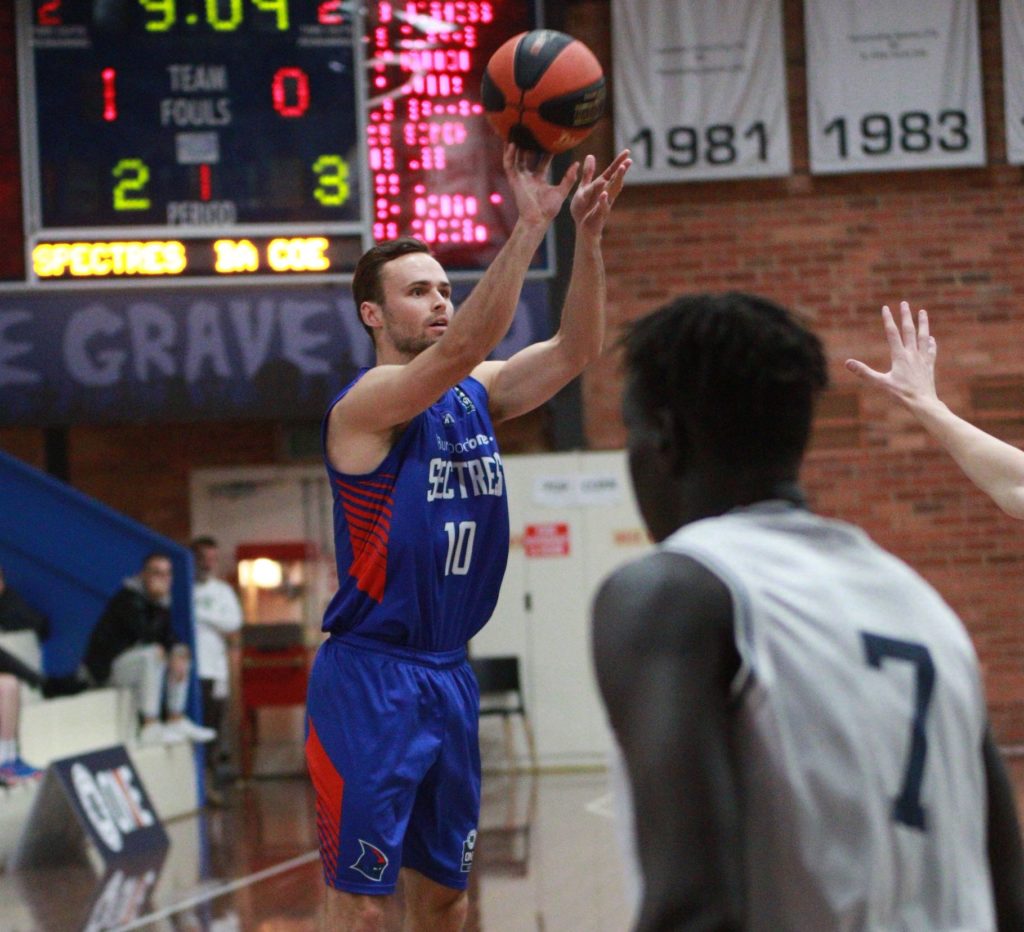 NUNAWADING Spectres have drawn level with Ballarat Miners after back-to-back wins in Round 7, while the Miners suffered their first loss of the season to an impressive Basketball Australia Centre of Excellence (CoE). The Miners looked in control for the first half, leading by 12 points at half-time, before the CoE turned it on to draw within six at the final break and then level by the final buzzer, forcing the game into overtime. All the momentum was with the young stars, scoring seven points to four in overtime to win 80-77. Josh Bannan starred with 32 points, nine rebounds, two steals and two blocks, while Tamuri Wigness scored 11 points and had nine rebounds on debut for the CoE. For the Miners, Jerry Evans Jr continued his hot streak with 30 points, nine rebounds, four assists and a massive seven steals. Kuany Kuany also had 15 points, eight rebounds and three assists.

In the second game for the CoE, Nunawading Spectres claimed the win, getting up in a 10-point victory. The Spectres powered away to an 11-point lead at quarter time, and while the CoE constantly kept in touch with the home side, eventually the Spectres got home 88-78. Simon Conn scored 35 points, 14 rebounds and two assists in yet another double-double this season, while Dain Swetalla had 13 rebounds and 11 points. The CoE did not have a dominant scorer, with Josh Kunen (12 points, five rebounds) leading the way, while four others had 11 points including Josh Giddey who also had seven rebounds. A strong start against Dandenong Rangers on Saturday pulled in another win for the Spectres, racing to a 15-point lead before the Rangers drew within six at the final break, before the Spectres powered away thanks to a 29-18 final term. Tom Wright had 27 points, five rebounds and four assists, while Swetalla (24 points, seven rebounds and five assists) and Conn (19 points, eight rebounds and three assists) were also impressive in the win. For the Rangers, Lucas Barker top-scored with 18 points, two rebounds, three assists and four steals, while Sam Froling was terrific with 17 points and 10 rebounds.

Diamond Valley Eagles had a mixed bag of results this round, knocking off title contender, Kilsyth Cobras in a thrilling eight-point game. The Eagles produced a 26-14 final term to overrun the Cobras and run out 98-90 winners. Logan Hovey was sensational with 27 points and eight rebounds, while Joel Spear was busy with 15 points, four rebounds and five assists. For the Cobras, Peter Hooley continued his good form this season with 20 points, five rebounds, four assists and two steals, while Isaac Turner had 20 points, four rebounds and three assists. Although they went down in their second game, the Eagles took it right up to title contender, Geelong Supercats, losing 87-81. Hovey again starred with 22 points, 10 rebounds and four assists, while Darcy Harding managed 17 points, two rebounds and two assist in the loss. For Geelong, Demarcus Gatlin was unsurprisingly impressive in the win, amassing 21 points, six rebounds, three assists and three steals, while Anthony Williams also had 21 points, three rebounds and five assists in the victory. Lewis Thomas chipped in with 18 points, three rebounds and two assists. The win made up for the Supercats’ loss to Melbourne Tigers the day before, going down by six points after a 23-12 final term saw the home side secure the memorable win. Gatlin had 14 points, 10 rebounds and two assists, while Ma’alo Hicks had a game-high 15 rebounds to go with his 10 points. For the Tigers, Mike Wells registered a game-high 20 points, three rebounds, two assists and four steals. while Dave Pineau had 17 points, 10 rebounds, two steals and three blocks in a double-double game.

Frankston Blues winning streak continued on the weekend with a 13-point win over Knox Raiders at home. The 99-86 victory was the Blues’ fourth on the trot as Damon Bozeman posted 22 points, three rebounds, three assists and two steals in the victory, while Najeal Young had 18 points, six rebounds and three steals. Igor Hadziomerovic (13 points, five rebounds and two assists) and Majok Majok (eight points, nine rebounds, two assists and three blocks) were others who stood tall in the win. For Knox, Mike Rose was the standout player, recording 32 points, five rebounds, three assists and two steals. Also on a winning streak, Waverley Falcons made it three consecutive victories with a three-point win over the highly fancied Bendigo Braves. Dylan Travis sank 29 points – including the winning three-point shot – as well as eight rebounds, six assists and two steals in the win, while Deondre McWhorter (17 points, eight rebounds and four assists) and Bennie Lewis (16 points, 10 rebounds and six assists) were also impressive.

In the other two games, Ringwood Hawks and Eltham Wildcats both recorded wins over Southern Sabres. The Hawks won 96-73 on Saturday, winning every quarter on their way to the 23-point victory. Jacob Gibson top-scored with 30 points, six rebounds and two assists, while Matthew Fennell was unbelievable off the boards with 15 rebounds – 13 defensive – as well as 15 points, four assists and two steals. Joey Miller and Adrien Sturt both recorded 21 points, while combining for 13 rebounds and eight assists. For the Sabres, David Barlow had 15 points, four rebounds and one block, while Ryan Beisty had 14 points and four rebounds. In the loss to the Wildcats by 17 points, Barlow did not play and it was Kingsley Box who stood up with 16 points and 11 rebounds, while Beisty had 14 points and 11 rebounds. For the Wildcats, Josh Sykes was super in close with 27 points at 71.4 per cent accuracy, while recording 12 rebounds, two steals and two blocks. Adam Doyle was also a playmaker with 25 points, eight assists, four rebounds and two steals in the win.