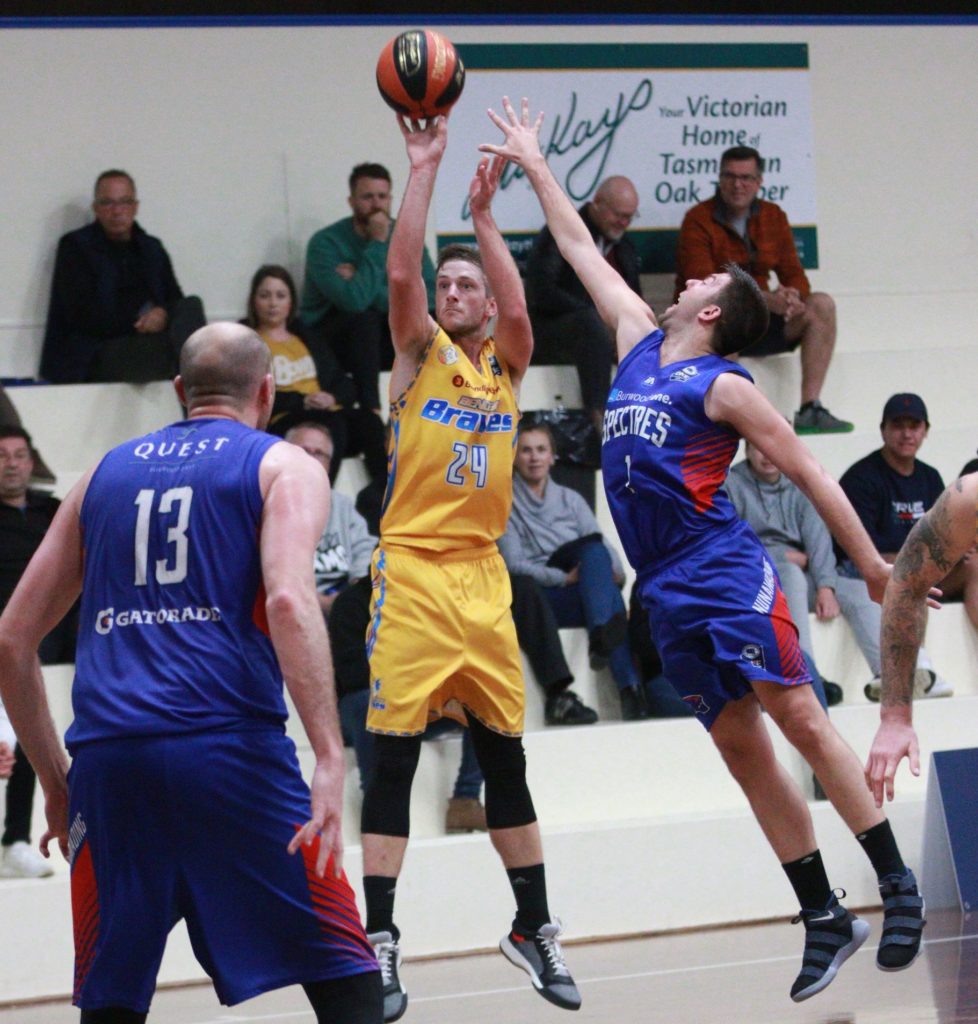 AFTER 23 games apiece, the two sides destined to fight it out for the 2019 National Basketball League (NBL)1 Men’s title have bee decided. Nunawading Spectres and Bendigo Braves will go head-to-head at the State Basketball Centre on Saturday night to determine which team lifts the inaugural NBL1 title.

Nunawading on face value start favourites, having finished inside the top four and won 16 of a possible 23 games. They went down to Frankston Blues in the opening final, before the Spectres worked their way back to dismiss premiership favourites Ballarat Miners and secure a spot in the decider. Bendigo’s road to the final was vastly different. They secured a finals spot courtesy of Waverley slipping up in the final round during their trip to Tasmania, with the Braves taking full advantage and sneaking into eighth spot on the table. It was all they needed to set themselves up with a half-chance because they took it and have since knocked over fifth, fourth and second on the table, with an eye to downing the third placed side in this one.

In terms of win-loss records, Nunawading won six of 11 at home, with 10 from 12 on the road, meaning the Spectres were more formidable as a visiting group. The Braves were fairly even, having won six from 10 at home, not too dissimilar to the five from 10 on the road – a record they increased to eight from 13 in the past three weeks. The Spectres average 91.7 points per game, while concede 84.4 points to their opposition. For the Braves, those numbers are 85.9 and 82.5 – a little lower on both accounts. The stats also tell a story of how the Spectres should be favourites, leading in all the key statistical areas bar blocks – and marginally shaded in steals – when it comes to comparing starting line-ups. But symbolic of blocks being a strength for the Braves, it has also told a story of the finals series, with the Braves denying their opposition despite all the numbers telling otherwise.

If form is an indicator, it is almost impossible to tip against Bendigo because of the momentum the Braves have built, and the fact they were able to knock over Frankston on the road – a feat Nunawading was unable to do two weeks earlier. In saying that, the Spectres were able to dismantle Ballarat Miners, an achievement that looked near-impossible 18 games into the season. The big difference between the teams is Nunawading have an even balance of players who can shoot, rebound and assist, while Bendigo have a genuine star in Ray Turner – who has continually got the job done – as well as a couple of handy players to assist in Deonte Burton and Mathiang Muo. Simon Conn, Dain Swetalla and Tom Wright have all pieced together really consistent seasons, with Costa Hronopoulos being a crucial key fourth player in that side. Shane McDonald might not score as much as the others, but with a massive average of 7.1 assists, he sets the team up.

1. Can Nunawading stop the momentum Bendigo has been building?
2. Will a sixth successive road trip tire the Braves?
3. Will Simon Conn be able to restrict the work of Ray Turner and have more of an influence on the game at the same time?

Nunawading Spectres should be the team to beat in this game. If you look at how each of the starting 10 players have performed this year, the Spectres have five of the top eight because their fifth player often contributes more than some team’s third or certainly fourth players. Turner has the ability to create something special and while he is not a passer, that is how Burton fits into the mix for the Braves. We will tip the Spectres because of the consistency across the board, but Bendigo have been the underdogs in every game and there is just something brewing there with the potential to remarkably win the title from eighth spot.