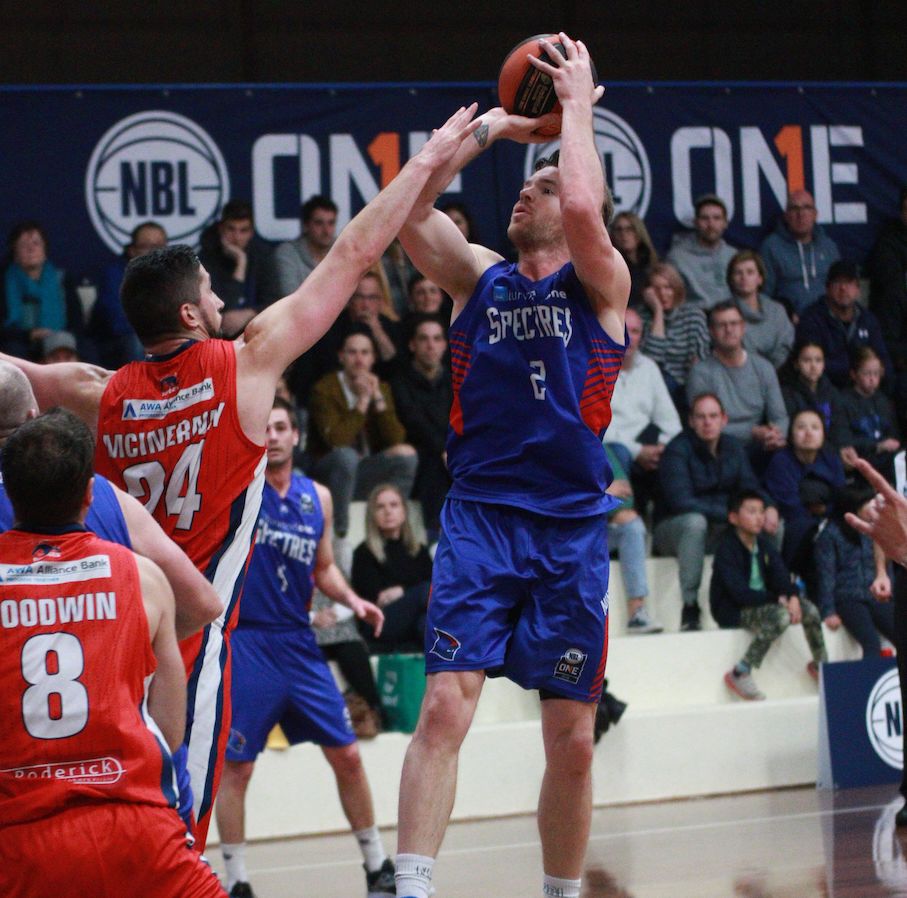 TWO tight contests decided the remaining two preliminary finalists with Nunawading Spectres getting up over Geelong Falcons, and Bendigo Braves continuing the run from eighth spot to down Kilsyth Cobras and move through to the final four. Ballarat Miners and Frankston Blues are waiting respectively for their opponents next weekend to determine the National Basketball League (NBL)1 Men’s decider.

Nunawading Spectres have made it through to a Preliminary Final to face Ballarat Miners after a come-from-behind six-point victory over Geelong Supercats. The Supercats opened the scoring with a 30-23 first term, then extended the lead to nine by the main break to give the visiting fans some hope of an upset. But soon the crowd was up and about as Nunawading clicked into gear, posting 24 points to 12 in the third term to regain the lead and the momentum heading into the final quarter. They continued that momentum into the last to score 19-16 and win 82-76 in a thrilling contest. Simon Conn posted a game-high 21 points as well as nine rebounds and two assists, while Dain Swetalla picked up a double-double thanks to 16 points and 11 rebounds. Tom Wright (18 points, four rebounds and three assists) and Lucas Walker (17 points, eight rebounds) were also impressive in the win. Geelong had its own spread of scorers, with Lewis Thomas (16 points, five rebounds and two assists) and Ma’alo Hicks (16 points, nine rebounds) the top scorers for the Supercats. Demarcus Gatlin stepped up for a double-double of 14 points, 11 rebounds, three assists and two blocks, while Nick Owusu finished with 10 points, seven rebounds, two assists and two steals.

Bendigo Braves further established themselves as a genuine title contender despite finishing in eighth spot, overpowering Kilsyth Cobras to send the fourth placed side out in straight sets. The Braves dominated the first term to lead by 15 points at quarter time, before Kilsyth hit back to cut the deficit back to 10, before it went back out to 17 by the last change. Despite a ridiculously high scoring final term which resulted in 76 points combined on the board, it would be Kilsyth who won the battle (41-35), but Bendigo that won the war with a 115-104 victory. Ray Turner could not be tamed with a remarkable 37 points and 12 rebounds, while teammate Deonte Burton was not far behind with 24 points and 12 defensive rebounds, as well as eight assists in the massive upset. Mathiang Muo scored 24 points, five rebounds and five assists, while Daniel Hansen also reached double figures with a stat line of 15 points, six rebounds and five assists. For the Cobras, Isaac Turner posted a team-high 33 points, as well as two rebounds and two steals, while Felix Van Hofe (14 points, five rebounds) and Sean MacDonald (14 points, three rebounds, four assists and three steals) both assisted with scoring, as did Chris Patton (13 points, four rebounds). Now the Braves face Frankston Blues in the Preliminary Final for a spot in the decider.