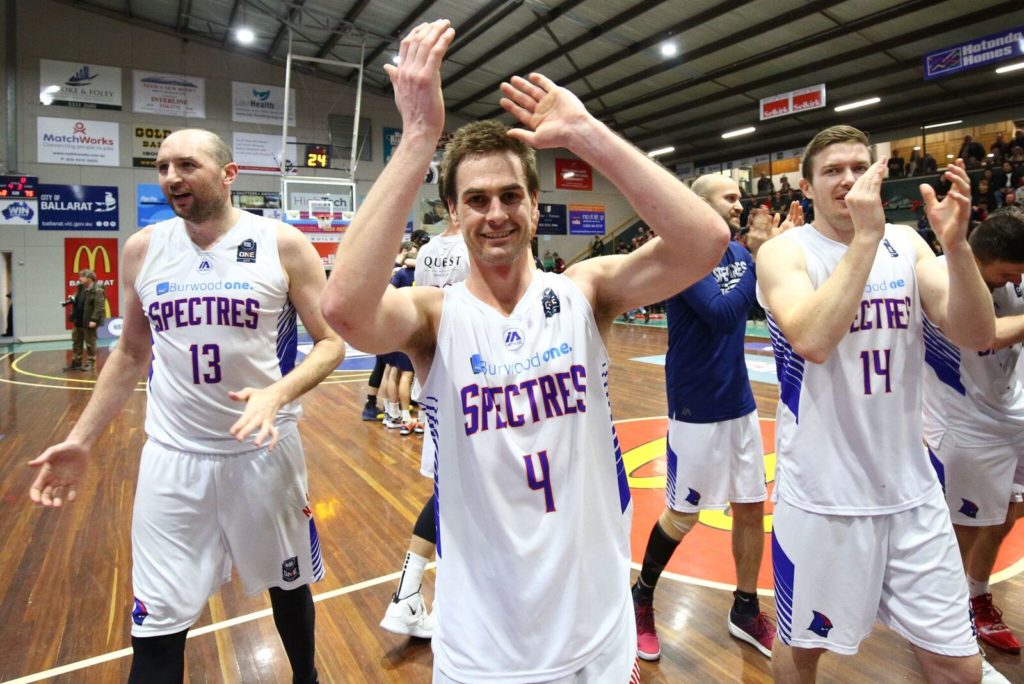 IN a remarkable weekend of National Basketball League (NBL)1 action, the top two teams are out of the premiership race with both Ballarat Miners and Frankston Blues defeated at home in the preliminary finals. The Miners exited thanks to a determined Nunawading Spectres who bounced back from a qualifying final loss to Frankston, to earn a spot in the decider. In the other game, Bendigo Braves somehow have made it to the grand final coming from eighth, knocking out the second placed Frankston Blues.

Nunawading has survived an almighty comeback from minor premiers Ballarat Miners to salute on the road in its preliminary final, and make the 2019 NBL1 Men’s decider. The Spectres lead for practically the entire game, taking the lead midway through the first term and getting out to as much as a 15-point lead with less than five minutes remaining in the third term. Nunawading held firm in that term to extend its three quarter time lead out to eight points – the same margin it had been at quarter time. The Miners rallied as you would expect in the final term, as they piled on 11 points to two for the home crowd to get up and about. But the Spectres refused to give in, getting back on top, ad while the Miners had a one-point advantage thanks to a Kuany Kuany lay-up with less than three minutes left to the clock, it was all Nunawading from there, scoring eight of the last nine points to win, 75-68. Dain Swetalla was superb throughout to continue his remarkable finals series, posting 27 points, 10 rebounds and an assist, shooting at 64.3 per cent from the field, as well as making all of his seven free throws. Tom Wright scored 16 points, seven rebounds and three assists, while Simon Conn also reached double figures with 12 points, three rebounds, two assists and two steals. Shane McDonald was the playmaker with nine points and nine assists, while Costa Hronopoulos was prominent near the boards with eight rebounds, as well as four points and three assists. Josh Fox was the top scorer for Ballarat with 22 points, five rebounds and two assists, while Kuany helped himself to 13 points and five rebounds.Sam Short (11 points, six rebounds and five assists) and Jerry Evans Jr (10 points, eight rebounds) were the other two who stood out on the scoring end. Unfortunately for Ballarat, a remarkable season falls one game short of the ultimate decider, while for Nunawading, its dreams of holding up the title remain very much alive.

While the other preliminary final could have gone either way, there was little doubting that Bendigo Braves were deserved winners in their clash on the road with Frankston Blues. The eighth placed side has earned a spot in the 2019 NBL1 decider despite just scraping into eighth and having to have three consecutive road trips during the finals. Travelling to MSAC, Kilsyth and now Frankston held no fears for the Braves who are running on serious adrenaline. The Blues are normally good starters and whilst they did have an old-fashioned arm-wrestle with the Braves in the first term to trail by one point at quarter time, their woes in the middle patches of games – as had been the case in their qualifying final win over Nunawading – came back to bite them as they managed just 23 points to the Braves’ 39 to open up a 17-point lead at the final break. The Blues found their groove again in the final term but it was too little, too late for the home side, losing the term by one and the game by 18 as the Braves advanced through to the grand final in what is one of the great finals stories. Mathiang Muo top scored for the Braves, piling on 25 points, seven rebounds, two assists and two steals, while Deonte Burton had 18 points, eight rebounds, five assists and four steals in a great all-round game. Ray Turner was enormous defensively, having 13 rebounds – 11 up the defensive end – as well as 16 points and two steals, while Chris Hogan had 13 points and three rebounds in the win. For Frankston, Damon Bozeman was the clear standout with 16 points, 11 rebounds and two blocks, while Igor Hadziomerovic finished with 15 points, five rebounds, two assists and two steals. Najeal Young (11 points, seven rebounds, two assists and two steals) also reached double-figure points, as did Daniel Trist off the bench (12 points, seven rebounds). At the end of the day though, it was the remarkable work of Bendigo across the court winning both the rebounding and assists stats, and shooting more comfortably from the field – 45.2 per cent to 35.2 per cent. They now advance through to the grand final against Nunawading.