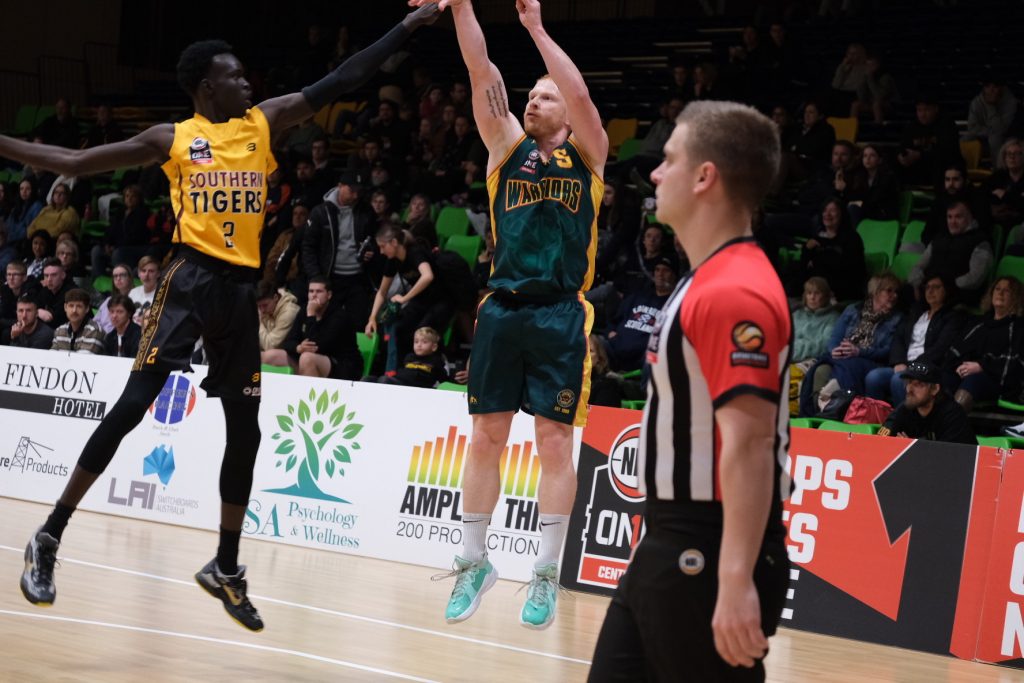 ROUND 9 of the National Basketball League (NBL)1 Central delivered the goods with plenty of close contests and a couple of blowouts in both the men’s and women’s leagues making for an enthralling round of action.

North Adelaide Rockets got the job done against the Norwood Flames to claim a convincing 18-point win. Norwood got the jump on the Rockets early establishing a three point lead before things tightened up in the second term with both sides shooting 27 points apiece. Half-time proved to be a godsend for North Adelaide as they came out firing in the third term piling on 24 points while keeping Norwood to 14 and that level of control continued into the final quarter limiting the home side to a mere 10 points. All in all the Rockets added 45 points to the Flames’ 24 which proved to be the main difference between winning and losing.

Four players hit the double-digit mark for Norwood with CJ Turnage topping the table in his 36 minutes out on court. Turnage finished with 17 points but lacked accuracy sitting at a mere 27 per cent from the field and failed to register a single triple from his eight attempts. But he did manage six rebounds, four assists and a block. Teammate Daniel Webber was a solid contributor with his 16 points and three rebounds as Matt Lycett chimed in with 13 points of his own. Cameron Huefner finished with 10 points to his name and just fell short of a double-double with nine rebounds and two assists. For the winners, Tobias Dowdell made his presence felt with a game-high 28 points at 58 per cent while also reeling in nine rebounds, four assists and two steals. Verle Williams was the next best with his 23 points, six rebounds, three assists and four steals while Manel Ayol chimed in with a handy 16 points. Jack Purchase was the other key cog for North Adelaide recording a double-double sinking 15 points and 12 rebounds.

The Rockets made light work of the Flames running out 35-point victors credit to a fast start. The Flames worked their way back into the contest in the second term with some increased offensive pressure but the half-time break did not do them any favours as the visitors came out with a real pep in their step and point to prove.

Alex Wilson had a game to remember for the Flames sinking 28 points at 30 per cent from the field and showcased her skill from range with five triples. She also dragged in 10 rebounds and three steals. Genna Anderson was the next best with 10 points and seven rebounds. Rockets star Jess Good was unstoppable with her 31 points and 16 rebounds as teammate Sam Defrancesco injected herself in the thick of things with 25 points and seven rebounds. Courtney Hansen also played a strong cameo role with her 14 points in her 20 minutes on court converting at 70 per cent from the field.

Only three points separated the two sides at the final buzzer with South Adelaide pipping the Lions at the post. It was an enthralling battle with Central District holding sway in the first half before South Adelaide hit back in the second half to outscore their opponents and really clamp down their offensive prowess. The Panthers kept the Lions to 23 points for the entire second half while adding 39 points to their own total.

It was a one man show with Owen Hulland doing the heavy lifting for South Adelaide producing 32 points and 12 rebounds in an all-round strong showing. Alex Mudronja was the other main facilitator for the Panthers sinking 21 points and picking up three assists and three rebounds. For Central Districts the combination between Lual Ding, David Humphries and Shaquille Maharaj kept them in the game. Ding managed 26 points and seven rebounds while both Humphries and Maharaj slotted 18 apiece.

It was a complete and utter white wash with the Panthers producing a scintillating win over Central District Lions. South Adelaide made all running in the first quarter producing a 28 points to 11 term. That momentum continued into the second quarter as the Panthers controlled the proceedings and continued their merry way. The best quarter was the last with South Adelaide attacking the rim and showing no mercy with a whopping 43 point term to seal the deal.

It was an absolute demolition job by Olivia Thompson who walked away with a staggering 51 points converting at 72 per cent from the field. Thompson not only impacted off the scoreboard but so two on the rebounding front with 13 to her name along with seven steals. She received plenty of help from the likes of Ashley Spencer who produced 31 points including three triples. Looking at the Central Districts and it was a very different affair with Rebecca Wells the only player to reach double figures thanks to her ten points while she also reeled in five rebounds and recorded one assist. Erin Boyd was the next best with nine points at 25 per cent field from the field while she also managed seven rebounds, three assists and three steals.

Forestville notched up another win, this time defeating Southern Tigers by 16 points. The Eagles got off to a fast start establishing a 10 point lead and did not look like relinquishing the lead winning every quarter bar the second where they both scored 24 points apiece. The third term helped to further solidify their standings.

There were plenty of contributors for the Tigers with six players reaching double-digits with Cameron Coleman topping the charts with 20 points and eight rebounds. Daniel Smith got busy with his 12 points while Koop McCalop was hot on his tail with 11 points. Three players in Nick Wurm, Machar Machar and Christian Artacho all managed 10 points each with Wurm also registering seven assists and Machar securing seven rebounds. Gregory Mays was influential for the Eagles producing 31 points at 60 per cent from the field to accompany his 10 rebounds while Michael Harris also lent a helping hand with his 21 points and eight rebounds. Brandon Brine also made an impact draining 18 points and picking up five rebounds along the way.

The battle between those Southern Tigers in Forestville Eagles went right down to the wire as only one point separated the two at the final buzzer with the Tigers getting the win. Southern Tigers got off to a strong start producing for 24 points while keeping the Forestville Eagles to 14 but the table slowly started to turn in the second as Forestville gained momentum. Things tightened up in the second half of the game with neither side able to really gain much separation but the early work from the Tigers gifted them the win.

Teige Morrell was the focal point for the Tigers dropping 23 points and 10 rebounds in the win. Morgan Yaeger was also influential producing 15 points at 40 per cent from the field to accompany her six rebounds all of which were defensive. Both Denelle Fawcett and Gemma Thacker chimed in with 11 and 10 points respectively to get their side over the line. Brooke Basham topscored for Forestville draining 25 points as Samantha Simons got busy with her 12 points and five rebounds.

It was another close contest, this time between West Adelaide and Sturt with the former getting the chocolates in a tight finish. The Sabres flew out of the blocks in the first quarter draining 31 points and while the scoring petered off in the second and third they did enough in the fourth to hold onto their lead and collect the win.

Bryan Michaels was the most influential when it came to scoreboard pain thanks to his 27 points while Earnest Ross was also up there thanks to his 24 points, five steals and 15 rebounds with 13 of them defensive. Fabian Johnson contributed a handy 16 points while Lachie Hunter was the sole other double-digits scorer for the Bearcats. Sam Daly was strong for the Sabres sinking 26 points while also amassing eight rebounds and six assists. Joel Spear did not disappoint with his 22 points, 11 rebounds and three assists as teammate Keanu Rasmussen got down to business drilling home 16 points.

Sturt Sabres got the chocolates over West Adelaide claiming a 24 point win. It was a relatively even to start the game with only two points separating the two sides at quarter time before Sturt put the foot down In this in the second term to claim the ascendancy. From there on they controlled the play and steadily built on their lead.

Jennie Rintala was a force to be reckoned with for West Adelaide coming up big with 20 points and 12 rebounds while Jasmin Fejo was handy with her 15 points at 50 per cent from the field. Jade Johnson had a day out for the Sabres draining a game-high 25 points along with four rebounds and five steals as teammate Nicola Matthews was effective with her 17 points and eight rebounds.

It was a one-sided affair as the Woodville Warriors trounced Eastern Mavericks to claim a resounding 46 point win. The Warriors flew out of the gates credit to their 29 points to 18 start and that only got better as they added 36 points and 35 points in the second and third term respectively. The Mavericks may have won the last quarter but the damage was already done with the Warriors comprehensive winners.

William Wise hit was prominent nailing 28 points for the Mavericks as teammate Callan Prider recorded 11 points and four rebounds  in the loss. Owen Raneberg was strong off the boards with seven rebounds. There was no shortage of points scorers for the Warriors as five players hit double figures and two of them in Devon McGee and James Boonstoppel slotting 25 and 22 points apiece. Julian Jacobs was also instrumental in the win knocking back 18 points and 12 assists as he guided his side to a convincing win.

The Mavericks managed to secure a 26-point win over Woodville Warriors. Woodville got out to a three-point lead before the Mavericks struck back in the second quarter to not only level the scores but so steal the lead and the momentum. It was a disappointing third term for Woodville as they only managed a mere three points, while the Mavericks piled on a whopping 20 to set up a block poster final term and the win.

Rachel Hines tried her hardest leading the Mavericks with 18 points and seven rebounds. She was ably assisted by Georgia Thomson who produced 14 points, three rebounds and four assists in her 23 minutes out on court. Mollie McKendrick was crafty registering a triple-double for her efforts with 10 points, 14 rebounds and 13 assists. Serena Waters was lethal with ball in hand top-scoring with 20 points as Kahli Harmer finished with seven points to her name.