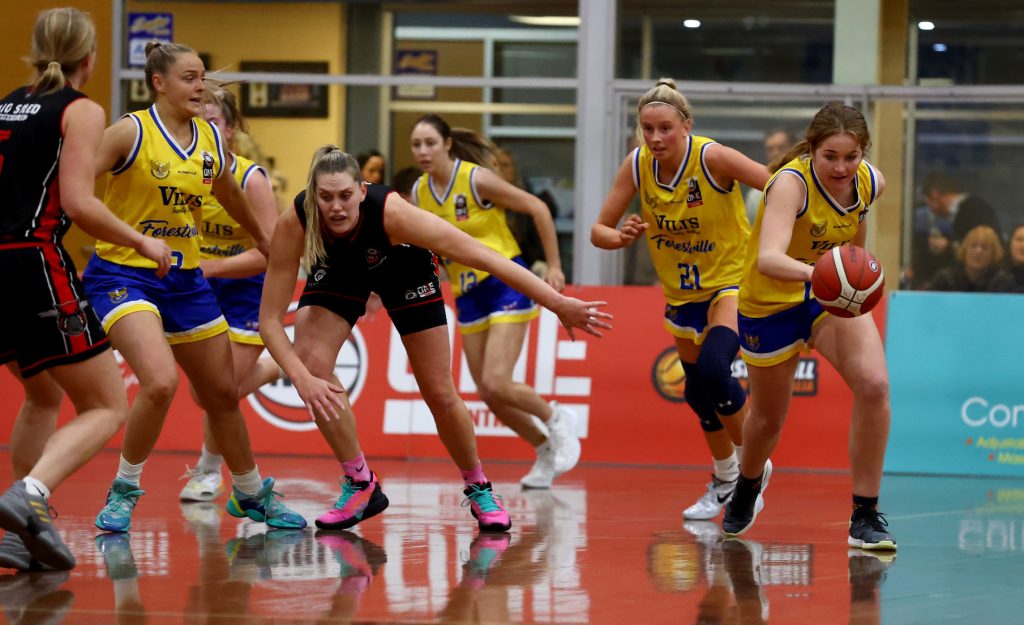 NATIONAL Basketball League (NBL)1 Central resumed over the weekend, with plenty of games going down to the wire in both the men’s and women’s divisions to give fans some entertaining action.

Round 8 of the NBL1 Central division kicked off with a thriller, as the Forestville Eagles stole a one-point win over the West Adelaide Bearcats at Wayville Sports Centre on Saturday night. Eagle Samantha Simons was fouled on a three-point attempt with just two seconds to go, and the star nailed all three to steal a victory and take the team’s winning streak to five. Simons was far and away the best performer on the court, finishing the game with 31 points and 10 rebounds, while Jennie Rintala was outstanding for the Bearcats, pouring in 27 points and 15 rebounds.

In another classic, the Eagles have escaped Wayville Sports Centre with a three-point victory over the Bearcats on Saturday night. The match was back and forth all game, eventually going to overtime thanks to a three-pointer from Bearcat Earnest Ross, and in overtime, it was the Eagles who made the most of their chances. Forrestville’s Michael Harris had the game sealing play with a steal and basket with two seconds to go. Harris finished the game with 25 points and 12 rebounds in a strong outing and was only bested by teammate Gregory Mays (31 points and 11 rebounds). Ross was huge for the Bearcats, nearly singlehandedly dragging his side over the line with 32 points, 19 rebounds, seven assists and four steals.

The Sturt Sabres proved too strong in their clash with the South Adelaide Panthers, running away with a 14-point win at Springbank Secondary College on Saturday night. The game was up for grabs right up until the final quarter, where the Sabres were able to put the foot down and secure their seventh win of the season to maintain second position on the ladder. For the Sabres, Kylee Smith was instrumental, finishing with 25 points, 11 rebounds, six assists and four steals. For the Panthers, Olivia Thompson was typically impressive with 20 points and eight rebounds.

The Sturt Sabres continue to remain the competition benchmark, taking down the Panthers by 20 points at Springbank Secondary College on Saturday night for their eighth win from eight games. The Panthers never looked close to the ladder-leaders, and the Sabres look like they will prove tough to slow down as the season progresses, having nearly played and defeated every side. For the Sabres, Keanu Rasmussen surprised everyone to score 31 points (9/10 from the field, 5/6 from three) and prove the Sabres have plenty of options to score.

The Southern Tigers delivered a dominant display, taking down the Woodville Warriors by 44 points at St Clair Recreation Centre on Saturday night. The Tigers have been the team to beat this year, and this performance only echoes this, with the Tigers led by an unbelievable performance from Teige Morrell. Morell finished the match with a whopping 37 points and 22 rebounds and was clearly the most dominant performer on the court, and the Warriors simply couldn’t contain her. The Tigers will take some stopping this year and if they keep up performances of this level, they might keep this undefeated streak rolling.

The Southern Tigers delivered a four-quarter performance as they took down the Woodville Warriors by 23 points at St Clair Recreation Centre on Saturday night. The Tigers won all four quarters and the Warriors were never given a chance to conjure a comeback as the Tigers cruised to their sixth win of the year. For the victors, Cameron Coleman’s 23-point performance was telling, with the Tiger delivering efficient shooting and also grabbed nine rebounds and dished out six assists.

The Central Districts Lions have continued to struggle, falling to the Norwood Flames by 54 points at the STARplex on Saturday night. The Flames were able to do as they please, consistently finding open looks and knocking down shot after shot. For the Flames, Alex Wilson led the charge, dominating the entire game to finish with 35 points and knocking down seven three-pointers on efficient shooting. For the Lions, April Rummery Lamb continued her solid scoring run to end the game with 23 points.

The Norwood Flames did enough to claim their fourth win of the year, taking down the Central Districts Lions by 10 points at the STARplex on Saturday night. The Flames delivered strong first and third terms that were crucial in securing a lead that the Lions would not eventually overcome. For the Flames, CJ Turnage was the main source of scoring for his side, pouring in 28 points and pulling down seven rebounds, while Lual Diing (16 points) battled hard for the Lions.

The North Adelaide Rockets have found themselves back on the winner’s list, taking down the Eastern Mavericks by 21 points at The Lights Community and Sports Centre on Saturday night. A monstrous first term set up the victory, where the Rockets outscore their opponents 30-9, and the Mavericks simply couldn’t recover. For the Rockets, Sam Defrancesco led the way with 23 points, 13 rebounds and five steals in a solid all-around performance.

The North Adelaide Rockets did enough to survive a strong comeback from the Eastern Mavericks, taking home a four-point victory at The Lights Community and Sports Centre on Saturday night. The Mavericks gave it their all in the final term, outscoring their opponents to try and steal an unlikely win, but fell agonisingly short. For the Rockets, Manel Ayol led the way on both ends of the court, finishing with 24 points and 13 rebounds.