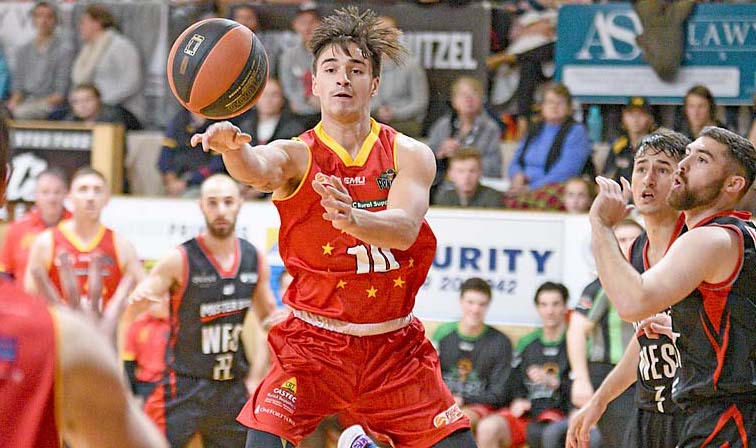 THE National Basketball League (NBL)1 competition was cancelled for the 2020 season, so instead we take a look back at some of the teams that would have been tipping off in the NBL1 Central competition. Today’s side in West Adelaide Bearcats mens team that finished seventh overall on the table, a win behind sixth but seven wins behind a finals spot.

The Bearcats’ top scorer on the side put up some big numbers of 22.1 points and almost nine rebounds per game each week. The average came despite a couple of quite games where Jefferson recorded single-digit points, but then he had a three-game streak in May. Across the three matches, Jefferson averaged 34 points and nine rebounds in a remarkable run of form. His season ended with his second highest score in the final round, picking up a double-double of 36 points and 10 rebounds, the last of seven double doubles for the year.

As the dominant playmaker in the team, Thomas was more than capable of dishing off dimes or going it alone, filling up the stats across the board. Finishing second to Jefferson in both points and rebounds, while topping the assists column showed just how vital he was to the Bearcats’ offensive transition, and he could have been even more effective with his three-point and free-throw shooting percentages considerably low. In 2019, Thomas averaged 35.9 minutes on court, the most of any Bearcats player and his best game came against Eastern where he almost had a triple-double thanks to 20 points, 12 rebounds and eight assists.

While Kubank missed three games during the season, he still had an effective time and was able to have an impact in those 17 matches he played. Being an accurate shooter from inside the arc, Kubank dropped 47.8 per cent of his two-point attempts and then 73.4 per cent from the line on his way to 16.5 points per game. Along with 6.3 rebounds, Kubank was a clear third standout in the matches, and he picked up double doubles twice, including in his best game where he had 25 points, 11 rebounds and four assists.

Highlight of the season: Opening season with three wins

The start of the 2019 season provided plenty of hope for the Bearcats, going undefeated for three rounds before running into Norwood Flames. In that time, West Adelaide knocked off Southern Tigers, South Adelaide Panthers and Sturt Sabres.

In the only win against a team that finished above them on the table, West Adelaide triumphed 86-75 over Central District in late June. In that 11-point win, the Bearcats dominated off the offensive glass with 17-6 offensive rebounds on their way to a 50-29 total rebounds count. Jefferson drilled 27 points, 11 rebounds and two assists, while Thomas had 10 points, 11 assists, five rebounds and three steals in the win. Kubank (15 points, eight rebounds and two assists) and Lucas Valk (14 points, three rebounds, three assists and three steals) were also handy.

It would be a great result if Sheppard can get out on the court for the Bearcats in 2020 having put up some huge numbers coming out of college at Malone. In the NCAA, Sheppard averaged 19.2 points and 5.2 rebounds, something that would definitely show up in the NBL1 as a player to guide an offence around.

West Adelaide Bearcats would have been missing a number of key players from their 2019 campaign, but brought in a number of talents including Sheppard. If they could attack the season differently and not fall into a slump mid-season, then it would have been interesting to see what they could do. There is much unknown about 2021, but hopefully the Bearcats can retain their list for next season.