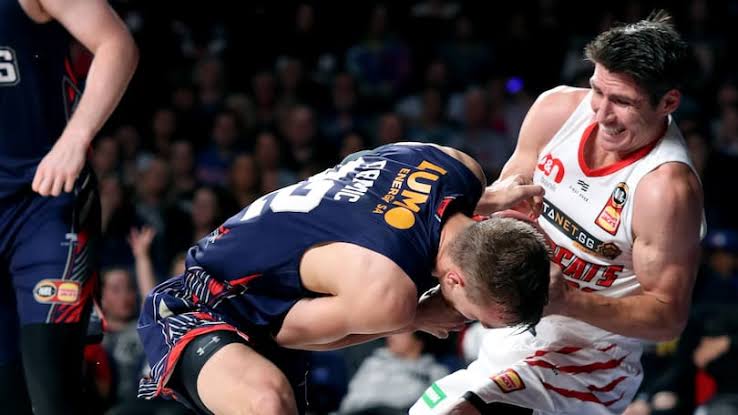 THE NBL’s Rivalry Round exhibited close results from Friday to Sunday with Melbourne United getting the one-point Throwdown victory over the Phoenix and with LaMelo Ball Illawarra was able to gather the largest attendance record at NBL game in history, travelling to Sydney for the first time against Andrew Bogut and his Kings. We also saw Cairns get the win over Brisbane, while Perth was able to come out victorious from both of their match-ups over the entertaining weekend.

Rivalry Round kicked off in South Australia where the 36ers came in looking to end a three-game losing streak. In what was a closely contested game throughout, with the point differential never getting to double digits through to the final buzzer. But with Perth’s field goal percentage finishing at 52% compared to Adelaide’s 45%, the Wildcats held their noses in front for the majority of the game and throughout the entire second half, ultimately obtaining their first win of the weekend taking the contest by four points. Despite Daniel Johnson’s double-double (23 points, 12 rebounds) and Jerome Randle’s big numbers on the scoreboard both notching up 23 points and Eric Griffin’s additional 18, five Wildcats finished with double digits. Led by Nicholas Kay who finished the night with 25 points, eight rebounds and five assists, which was further aided by centre Dario Hunt, who recorded 19 points and eight strong rebounds. The loss for the 36ers extends their losing run to four games placing them sixth on the ladder.

The Melbourne Throwdown, the NBL’s newest rivalry, took centre-stage on Saturday and did not disappoint. It was the Phoenix who struck first at Melbourne Arena, as the new kids on the block held a lead as big as 12 points in the opening quarter, but due to two big three-pointers from Chris Goulding, including one on the buzzer, was able to cut the lead to five at the first break. Led by Mitch Creek’s 19 first-half points, the Phoenix possessed a six-point lead at the main break and a set the stage for a good finish. Melbourne United, who are well-known for their sporadic runs showcased this once again, as Mitch McCarron made a case for assist of the week, as his no-look behind the neck pass found its way to Shae Ili for the big-time three giving United a four-point lead. This was short lived however, as the Phoenix were able to take a commanding nine-point lead with five minutes remaining. Big plays by Shawn Long and McCarron sparked another run for United and the lone free-throw made by Melo Trimble was enough to get United over the line by a single point, emerging victorious in the third chapter of The Showdown and capping off their fifth consecutive win. Major contributors for United included Trimble (22 points and three assists) and Ili (16 pts and four assists), whereas Goulding was 3-6 from three-point range. For the Phoenix, Creek was again the high performer finishing with a massive 27 points, along with seven rebounds. In addition, Keith Benson came away with 20 points, eight rebounds and a season-high five blocks. United overtook the Phoenix to claim third spot in the standings dropping the Phoenix to fourth.

The Taipans exploded out of the blocks to open up their clash against the Bullets leading 14-3 three minutes into the first period setting the tone for the remainder of the game. For all three of the opening quarters the Orange Army would continue to extend its lead over the Bullets leading by a whopping 20 points late in the third quarter. But luckily for Brisbane, their shining guard Nathan Sobey was able to spark a late run in the fourth quarter to make the end result more respectable, as the Bullets outscored the Taipans 28-18. Nevertheless, the damage had been done and the Taipans were able to grab their third win of the season, with the aid of their efficient big men Kouat Noi and Nathan Jawai, finishing with 20 and 14 points respectively. Noi would finish with 10 rebounds, adding a double-double to his season so far and center, Cameron Oliver, would go one rebound shy of his own double-double (13 points and nine rebs). The lone standout for the Bullets would be Sobey, as he would finish with 20 points, six rebounds and seven assists. The loss puts Brisbane at four wins and five losses on the season placing them in a tricky position to work their way up the ladder.

With a great amount of participation surrounding the contest that took place at the Qudos Bank Arena prior to the game with the arrival of new rookie LaMelo Ball, tickets sold in abundance. In fact, it was confirmed that the total attendance for the match was the biggest number in history for an NBL match, with the final number of attendees being verified as 17,541. Good ball-movement and shooting would be key reasons why the Hawks would lead by four at quarter time, but the top-ranked Kings responded in-turn with a big second quarter led by MVP candidate Casper Ware. A pretty even second half would ensue with both teams trading blows back and forth, but with Jae’sean Tate taking the front-seat of Sydney’s strong shooting performance, capped off with Ware’s alley-oop dime to Bogut, the Kings would ride-out their home-court advantage to take the contest by five points. Ball did not fail to make his mark on the game finishing with 16 points and six assists supporting Todd Blanchfield’s 22. For the Kings, Tate’s 24 points and seven rebounds provided him with one his best performances this season so far. In addition, Ware’s 21 points and six assists only helped Sydney get their ninth win on the season placing them a game and a half ahead of the Perth Wildcats.

Perth was hot on their heels after their win against Adelaide on Friday night and were looking at rounding out a successful round seven back in Western Australia. Both teams struggled to find their rhythm in the first quarter with neither team able to crack the 20 point mark. Despite this, the home crowd was able to rile up the Wildcats, particularly Bryce Cotton, who tallied 19 first-half points, helping Perth lead by 12 at the main break. Nevertheless, the Breakers found their stroke in the third quarter to half the deficit with a quarter to play, but the 36ers defence led by Damian Martin was strong enough to hold off the New Zealand charge and secure the double win over the Rivalry Round weekend. Cotton, who managed to put on a scoring showcase, finished with his second-highest points total this season with 34, as well as a return to form from Jessie Wagstaff, who finished with 14. Corey Webster managed to take away 23 points from WA for the Breakers, along with seven rebounds and four assists. But Rj Hampton was missing in action, only mustering four points in his side’s seventh loss on the year. The loss keeps New Zealand in eighth place and has Perth chasing the Sydney Kings at the top of the table.

The Adelaide 36ers came to play last night, taking it to the home side and ultimately prevailing in a hard fought contest snapping a four-game losing streak. The 36ers have been up and down to say the least this season, but pulled out all the stops against the highly rated South East Melbourne Phoenix who simply had no answers for their travelling opposition. Randle all but steered the 36ers to victory with an electric opening term downing 15 points and continued that vein of scoring to finish with 27 points for the game. He was ably assisted by forward Anthony Drmic who slotted an impressive 21 points and gobbled up eight rebounds falling two short of a double double. Griffin was another key contributor for Adelaide sinking 17 points, seven rebounds and five assists. However, Phoenix did not go down without a fight rallying in the last quarter to put pressure on the 36ers thanks to superstars Creek and John Roberson. Creek was classy across the court as per usual finishing with another double double with 22 points and 11 rebounds while Roberson had 21 points to his name. Ben Madgen recorded 14 points and Jaye Crockett nailed 13 points but overall the Phoenix seemed unable to find their usual rhythm and explosiveness. The loss sees them only just hang on to fourth spot while the win for Adelaide moves them to sixth just one win outside of the top four.