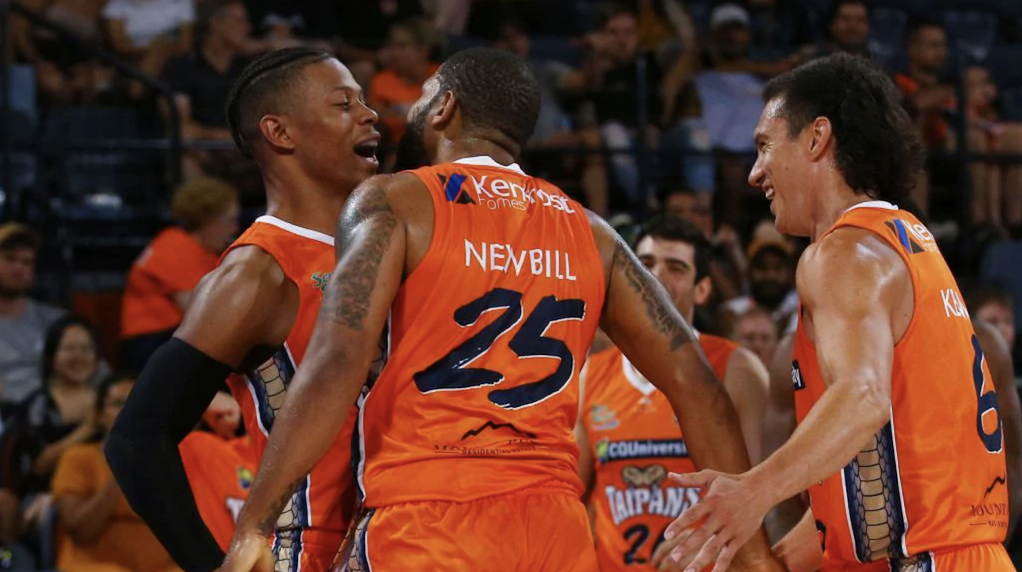 CAIRNS Taipans grabbed third spot, South East Melbourne Phoenix moved out of the bottom two, and Perth Wildcats and Sydney Kings showed why they are the two teams to beat in what was a big round of action in the National Basketball League (NBL).

Cairns broke New Zealand’s five-game winning streak with a thrilling six-point victory at home on Thursday night thanks to a strong second quarter. The Taipans trailed by five points at the first break, but turned the game around in the next quarter with a 30-19 term to lead by six at half-time. New Zealand got back on top in the third term, posting 20-14 and levelled the scores at the final break. It was the home side that stepped up in the last stanza, claiming a vital win to leapfrog Melbourne United into third spot on the NBL ladder. Scott Machado led the way with 29 points, seven rebounds and three assists, well helped by D.J. Newbill (20 points, four rebounds and three steals) and Cameron Oliver (14 points, eight rebounds, two steals and two blocks) for the Taipans. Scotty Hopson had a costly 10 turnovers, but still managed 18 points for the Breakers, as well as eight assists, seven rebounds and two steals. Thomas Abercrombie (16 points, seven rebounds) was strong off the boards, while the Breakers’ best could well have been Robert Loe off the bench, posting a team-high 24 points, seven rebounds and two blocks.

Perth maintained a two-win gap inside the top two with an important 22-point victory over Illawarra on the road. The Hawks are anchored to the bottom of the table and barring a complete revival, will win this season’s wooden spoon. The Wildcats, with the introduction of seven-year NBA player Miles Plumlee coming off the bench, showed why they are a premiership contender with a strong first half. Perth posted 54 points to 36 in the first two quarters to lead by 18 points at the main break. Determined not to be blown away, the Hawks picked up after the break to win the third quarter, 24-19, but were soon outclassed again in the last with a 26-17 term as the Wildcats cruised to a 99-77 victory. Bryce Cotton led the way once again with 23 points, four rebounds, six assists and four steals on the night, while Nick Kay picked up a double-double courtesy of his 14 points, 10 rebounds and four assists. Terrico White (17 points, three rebounds, three assists and three steals) was strong once again, while Plumlee finished his debut with six points, three rebounds, one assist, one steal and two blocks. For the Hawks, Todd Blanchfield was the standout thanks to 26 points and eight rebounds, while Sunday Dech (15 points, five rebounds) and Daniel Grida (11 points, three rebounds) were the other two players to reach double-figure points.

After riding high from a win on Thursday night, Cairns Taipans were unable to topple the ladder-leading Sydney Kings at Qudos Bank Arena. The Taipans showed enough to suggest they are deserving of finals, matching it with the Kings for three quarters, but it was the first term that ultimately cost them. Sydney got away to a seven-point lead in the opening term and from there managed to hold the visitors at bay, winning the final two quarters by a point and breaking even in the second term to ensure the margin had enough breathing space with the eventual nine-point victory. Casper Ware and Daniel Kickert topped the Kings’ point-scorers with 18 apiece, the latter of whom set up the home side in the opening term. Jae’Sean Tate posted 15 points, eight rebounds and two steals on the night, while Brad Newley (13 points, three rebounds) and Andrew Bogut (six points, eight rebounds) were also impressive. Majok Deng was the top scorer for the Taipans, sinking 18 points, as well as six rebounds, while Machado (16 points, six rebounds, six assists and three steals), Newbill (15 points, seven assists and three steals) and Mirko Djeric (14 points, five rebounds, three assists and three steals) also contributed in the unlucky defeat.

A Jerome Randle inspired Adelaide 36ers survived a challenge from top four side Melbourne United to post a 14-point win at the Adelaide Entertainment Centre on Saturday night. The victory meant the home side moved just half a game out from United who look far from secured in the finals spots. The 36ers started strongly to lead by eight points at the first break, before United hit back to cut the deficit to five at the main break. Adelaide regained control in the second half and never let it go despite the visiting side’s best efforts, posting 47 points to 38 in order to run out 100-86 victors. Randle was a star throughout but stepped up in the last quarter, posting 23 points, three rebounds and three assists, well aided by big men, Eric Griffin (21 points, 11 rebounds) and Daniel Johnson (19 points, seven rebounds). Brendan Teys (11 points, four assists and three rebounds) and Anthony Drmic (nine points, eight rebounds, four assists and three steals) were also impressive on the night. For United, Chris Goulding (26 points, three rebounds and two assists) led the way in scoring, while Shawn Long‘s sensational season rolled on thanks to yet another double-double with 16 points and 15 rebounds. Mitch McCarron just missed out on a double-double following numbers of 10 points, nine rebounds and five assists, while Melo Trimble was quiet with five points and five assists.

After five consecutive wins on the trot, Round 15 proved to be an unlucky one for the Breakers, dropping both games over the weekend, with the latest being a 10-point loss to Brisbane at home. Normally steady on home soil, it was not the Breakers’ night after the Bullets slammed home 34 points to 21 in the second term to race away to a 10-point advantage at half-time. New Zealand clawed its way back to a five-point deficit by the final break, but that went back out to 10 by the last buzzer following a 26-21 final term in favour of the visitors. Lamar Patterson was simply sensational again for the Bullets, putting up numbers of 18 points, seven rebounds and five assists, while Matt Hodgson produced a double-double of 10 points and 10 rebounds. EJ Singler was not far behind thanks to his 13 points, nine rebounds and two assists, while Taylor Braun also helped himself to 14 points and two rebounds. Hopson was a shining light for the Breakers with 14 points, four rebounds and six assists, aided by Abercrombie (17 points, four rebounds) and Sek Henry (17 points, three rebounds and two assists).

In the final match of the round, South East Melbourne Phoenix maintained a spot in the finals race thanks to an eight-point win over cellar dwellers, Illawarra Hawks. It was the Hawks’ second loss at home over the weekend, as the Phoenix moved ahead of the Breakers following their disastrous run of form over the past couple of months which saw the league’s newest side drop to eighth on the table. Now only a couple of games outside the top four, the Phoenix can regroup, which started with a come-from-behind victory against the Hawks. Illawarra led by eight points at quarter time, but it was the Phoenix after that, securing an eight-point lead themselves at half-time then blowing it out to 13 by the final break. The home side cut the final deficit back to eight by the buzzer, but it was to no avail, going down 82-90. Dane Pineau‘s form continued after a mammoth double-double with 14 points – at 100 per cent from the field no less – as well as 18 rebounds – 14 defensive – and three blocks. He was far from alone on the scoring front with Kendall Stephens putting up 20 points, six rebounds and two steals, while Ben Madgen (17 points, three rebounds and five assists) and John Roberson (12 points, two rebounds and seven assists) covered for Mitch Creek in his quietest game for the season with just eight points, four rebounds and two assists. For the Hawks, Blanchfield again led the scoring with 15 points, as well as two rebounds, two assists and three steals, while Sam Froling (13 points, 11 rebounds) was the home side’s best, and Dech (13 points, five rebounds and two assists) and Grida (13 points) equalled his scoring output.