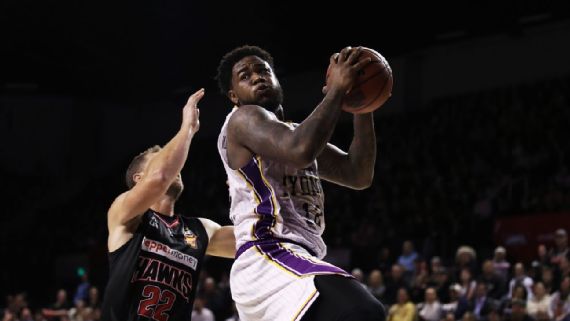 WITH slim finals hopes on the line, the Sydney Kings were able to sneak past the undermanned Illawarra Hawks, emerging from WIN Entertainment Centre with a six-point triumph on Thursday night. With their finals position locked in, the Hawks opted to rest star Tyler Harvey, giving the Kings an almighty confidence boost heading into the game, but were still dished a real scare, as the home side fought tooth and nail right until the end, but fell two baskets short. Leading by five points early in the final term, the Hawks looked as if they were more than capable of claiming an unlikely win, but late threes to Shaun Bruce and Xavier Cooks locked the game shut, as the Kings claimed an all-important victory.

The game opened in pretty dominant fashion for the Kings, starting the match on an 8-0 scoring run, thanks to Jarrell Martin finding an open lane to the hoop and finishing inside. The Hawks would soon after open their scoring, but the margin remained considerable, with a pair of Jarrad Weeks three-pointers opening the lead to double digits. The Hawks were able to chip away at this deficit, but still entered the first break trailing by six points with plenty of emphasis on the absence of leading-scorer Harvey. They were able to not only tie up proceedings early in the second quarter, but they even took the lead courtesy of a pair of long bombs from Hawk Lachlan Dent, who made the most of his extended minutes during the match. The Kings responded almost immediately, as Martin and guard Casper Ware came alive to close out the quarter in strong fashion, taking a seven-point advantage into half time. While the Hawks trailed, their belief in their ability to claim an unlikely win remained rock-solid.

The Kings opened the third term on another scoring tear, thanks to the range of Ware, who was really beginning to find his rhythm in the contest at this stage. An and-one to Jordan Hunter saw the lead again creep out to 11 points, and it looked as if Sydney were on the cusp of blowing the game wide open. The Hawks had other ideas though, taking over the game with a scoring blitz and bursting out to a three-point lead, before it was trimmed to just one point heading into the final term. The fourth quarter began with the Hawks jumping out of the gates to an early five-point advantage, thanks to a couple of tough finishes in the paint from Sam Froling. The Hawks had many hopes of a victory at this stage, but the Kings were able to grit their teeth and make the match-winning plays.

For the Kings, Martin was huge for his side, pouring in 23 points and 10 rebounds to deliver a significant impact on the result of the game. He was well aided by teammates Cooks (19 points) and Hunter (15 points). For the Hawks, Froling, Isaac White and Emmett Naar all contributed 12 points, and stood up in the absence of Harvey.

Closing in on the South East Melbourne Phoenix, the Kings have one more match to play as they look to sneak into the finals. They will face off against a fellow finals hopeful in the Brisbane Bullets, who are also looking to claw their way into the finals with a win. Be sure to tune in to Qudos Bank Arena on Saturday night in what should be an explosive contest, as both sides play for their seasons.