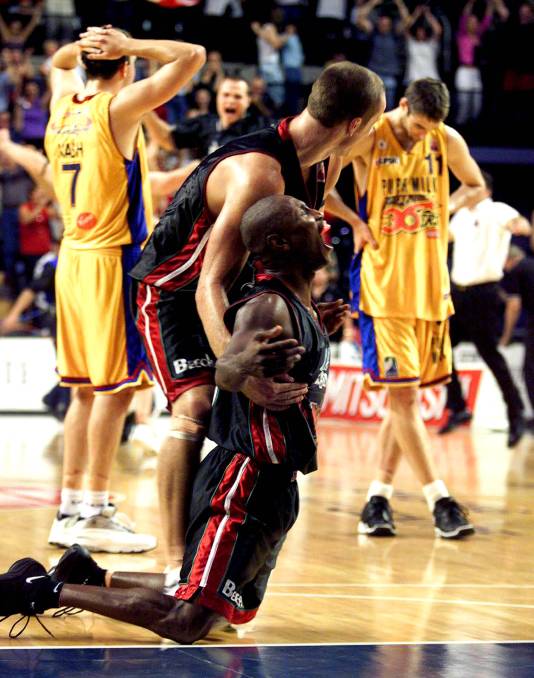 AWAITING the return of the National Basketball League (NBL), Draft Central takes you on a journey of some of the biggest and most memorable basketball games throughout history. Today we take a look at what could go down as one of the closest and greatest semi-finals game between Wollongong Hawks and Adelaide 36ers.

All the things leading up to this historic night felt just right. Two highly contested league rivals, check. In 2001, the Wollongong Hawks had swept the regular season series, but both games were decided by just three points. The Hawks came out on top again in Game 1, by just one point, while Adelaide got their first win against the team in good fashion, winning by 11. Both teams felt like they had something big to prove. While Adelaide had made it all the way again to the semi-finals last season, this was the Hawks first postseason entrance in years. But most importantly, no fan on either side could predict with confidence what on earth would transpire in this final game.

It was no secret the 36ers were nervous and after a few clumsy turnovers and shots Darnell Mee, the ALL-NBL power forward of that season, was able to silence the crowd – and a trumpet – with an and-one. That shot may have even stifled some of his teammates’ nerves, because from that point on, they came out of the gates strong. By attacking the rim voraciously and getting the open looks from three, they quickly looked like a team meant to play in a semi-final. But the Hawks were no easy competitor, and being young and quick, they looked to score on every transition opportunity, usually finding their rhythm with the elbow jumpers. This run and gun style gave them a minuscule lead of just one point to end the first.

But while both teams needed to make adjustments, it was the Hawks, led by Coach of the Year Brendan Joyce, that looked the most calibrated. From not attempting a single free throw all game, the Hawks led by natural slashes, Melvin Thomas and Matt Garrison, made attacking the rim a top priority. But it was Mark Nash for the 36ers that was most valuable in the first half. He might not have had the most shots but he did have the most points. Play after play, he kept making the right pass, the right read and most importantly, the right shot. It was through his variety of scoring and basketball IQ that the 36ers were able to stand side by side with the Hawks, ending the half on a stalemate, 55 points apiece.

The 36ers’ finals experience started to come into play. As the pressure built and fatigue took its toll, Adelaide remained poised and under control. On paper, one could argue they may not have had the better team, but come finals time, veterans take over and the 36ers had a lot more than their opponents. You can out-rebound a team, out-assist a team, have less turnovers, but if you cannot make shots, then you will struggle to win a series. Although Wollongong played better, especially in the third quarter, it was becoming increasingly clear the moment was getting a little too big for them.

Wollongong entered the final quarter shooting 44 per cent, and their opponents? 54 per cent. That is the impact of veteran leadership. But to be fair, no one could question this Hawks team’s heart, which in large part thanks to rookie of the year, Axel Dench, cut their deficit completely within just two minutes of the fourth quarter beginning.

The rest of the quarter remained in the back and forth nature that characterised what had made this game so great from the beginning. Until there were only 90 second left, the 36ers held a two point lead with the chance to extend it. With only one second left on the shot clock, Hawks’ Charles Thompson was ruled with a blocking foul, seeing the 36ers now able to head to the line on any foul called on their rivals. After missing the first, the 36ers redeemed themselves with the next one, making it now a three point lead. The Hawks were able to quickly get two points but fouled the 36ers again on the other end. One miss, one make, now a two-point game with less than a minute on the clock.

Both teams proceeded to fumble the game clinching plays, leading to the 36ers securing a rebound as the clock ticked down and the fans went into a frenzy. They found Damon Lowery with only a couple second left, he went up for a contested three but was fouled. Lowery was going to the line with his team down by two, to either lose, battle in overtime or win. With no time left, the outcome was up to him alone.

The first shot always means the most in times like these, but somehow, the ball rolled from side to side before dropping through the net. The next shot bounced on both sides of the rim, but yet again dropped through. In each shot, Lowery nearly fell to the ground as the ball went in the air. He was not giving off the ‘calm superstar assassin’ vibe, at all. The last shot bounced on each four quarters of the rim, Lowery was already on his knees while the crowd was on their toes, swaying side to side as if to impact the projection of the ball. But again, it went in.

The crowd were in raptures as teammates and even coaches dove on the star. Wollongong went on to win the Grand Final that year but this game seemed almost just as special. The player of the game definitely landed on Melvin Thomas’ feet who dropped a whopping 28 points along with 11 rebounds. Lowery clearly also had his impact stamped out with 20 points, as well as going five from five from the charity stripe. 36ers’ Kevin Brooks played a commendable game, finishing with 26, while shooting 64 per cent from the field.