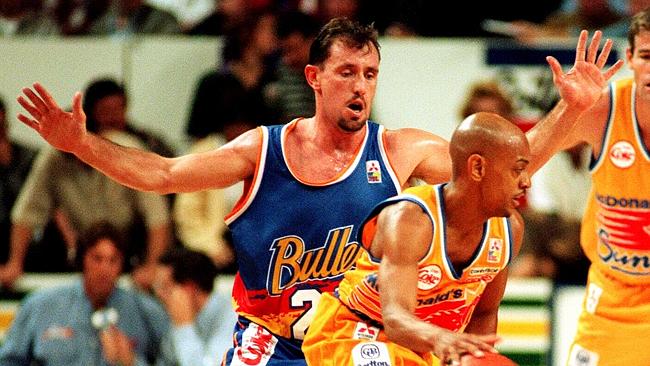 In 1997 the Townsville Suns were fighting for just that – a chance to play competitive, highly watched basketball in pursuit of a championship. A loss would mean their season was over, because with just one game left in the regular season, the Suns had to bring it. But surpassing the 17-13 Perth Wildcats was no easy challenge. Led by two time NBL Grand Final MVP Ricky Grace, the Wildcats had beaten the Suns in nine of their last ten meetings. But their last encounter was the lone Suns win of the lot, potentially throwing a wrench in whatever momentum Perth originally held.

This meant the outcome of this game coming in was almost impossible to predict – the only thing fans knew was that Townsville were desperate. This was made evident in the very first play as Chris Sneed dove from half court to grab the ball after a fumble on a tipped rebound. But sometimes hustle and heart cannot overcome everything as Perth clearly had the height advance down low. This was no small detail; in fact it was probably the most important element of the game as the Suns were slaughtered on the glass, finishing the quarter with a six rebound deficit, down 24-17. However, this was an expected challenge coming in as the two teams ranked first and last in the league, respectively.

The Suns needed to change some things around, so that is what they did. Firstly, their off-ball defenders adjusted by going under screens, in contrast to their first quarter approach of going over. This was to give them a sharper angle to the basket in case a shot was thrown up. However this clearly took its toll on their ability to play perimeter defence. Secondly, once the shot was thrown up, all five Townsville players either boxed out or attacked the glass, leading to not one single transition basket in the second or third quarter. With all of these necessary adjustments, along with a never say die attitude from Suns’ star Derek Rucker, the Suns were only able to score two more points than the Wildcats in the second, and tie up the third.

But despite the commendable efforts of Rucker, who was visibly sparking his team with more and more energy with every play, his form was soon to run out. This was because Rucker, who was only six-foot tall, had not spent a single minute on the bench since tip off, while acting as the leading rebound general throughout the match.

Again, all of these pro-rebounding improvements only worked to stop the bleeding, but did little-to-nothing to give the Suns any form of edge. So heading into their fourth quarter, with the Wildcats shooting at an unsurprising 45 per cent from three and leading by eight in the rebound column, the Suns would have to play their greatest quarter to shrink the five-point lead.

In front of a Townsville-led crowd, the Suns put on that type of quarter for them coming out of the gates hot with a contest three from Rucker, the Suns killed the lead early. But creating their own is always the harder hurdle. Neither team was giving in, until there were just two minutes left, with Perth holding a three-point lead.

So far up to that point, the Suns were playing exceptional, making all the right passes and taking all the right shots while giving full effort on both rebounding and defence. This was all on the back of Rucker. But this would be their downfall as once Rucker became seriously gassed, his individual game diminished. His shot fell way short and he was beat on the board by fresher legs on Perth, especially James Crawford, a Wildcats player off the bench, who was dropping buckets in the last.

As Rucker regressed, the team inevitably followed until they lost by just a basket, 102-100. Rucker, who played an exceptional game, could not play exceptionally in every minute, but still finished with a jaw-dropping 36 points, seven rebounds and nine assists. That was one for the record books. His best supporting player had to be Sneed, who dropped in 16 points along with ten rebounds.

For the victorious Wildcats, they would go all the way to the Semi Finals before losing, but would have the surprising Crawford to thank for this win, who sketched in 25 points.