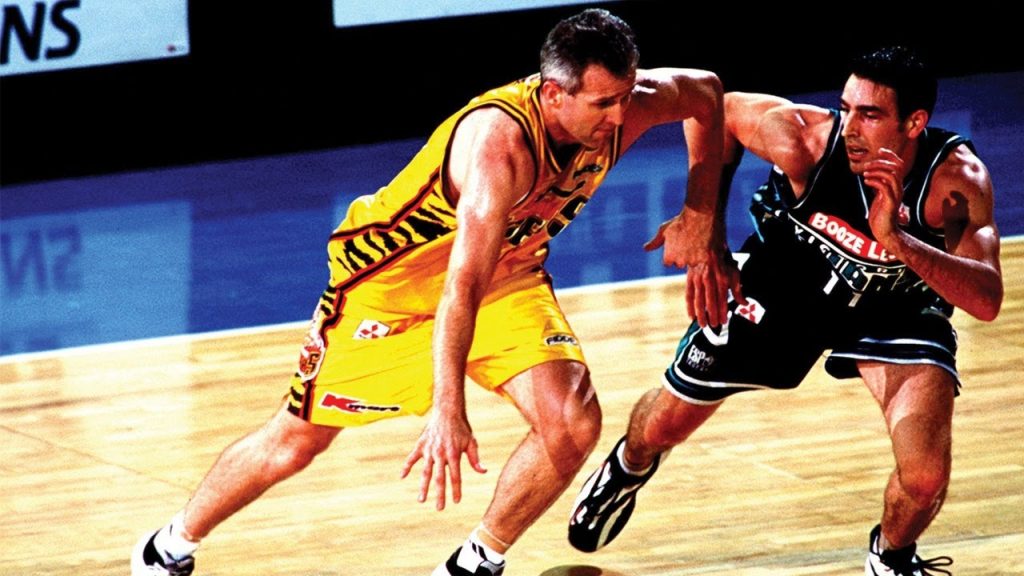 EVER heard of the ‘Blood Game’? It was a forgotten classic crested in the rich history of the National Basketball League (NBL), with epic level game play mixed and a historic ending. Fortunately Draft Central have you covered with their rewind of the 1999 meeting between the war-torn Melbourne Tigers and the rising Victorian Titans.

It was quickly realised by all fans in attendance that this regular season game was going to become the match of the night. Diving for loose balls and fighting for rebounds as both teams came bursting out of the gates with their intensity on full display. All of the characteristics of a great game to come.

From a fresh perspective, it was clear that Andrew Gaze still had it, even in 1999. At 34 years of age, Gaze displayed superstar-like play making abilities while running the Tigers offence to perfection, all while leading the league in points per game with 29. But it was almost just as clear that the Titans did their homework. Whenever Gaze would hold it at the top of the perimeter, a Titans defender would play nose to nose, going over screens with a supportive big to close the lanes, until the ball left his hands.

But this would almost always leave an open Tiger to catch it at the elbow, a sacrifice for the Titans that was paying off big time for the Tigers. With Gaze continuing to make the perfect pass and the Tigers’ cast continuing to score the ball, the Tigers were able to establish a 33-22 lead heading into the second quarter.

The Titans adjusted their game plan immensely, by removing the second man to help, ultimately putting the pressure on Gaze to score man on man. This turned things around instantly in favour of Titans for two reasons. Firstly, after playing a full quarter of taking barely any shots, Gaze was now encouraged to shoot at will, leading to a few clunkers to start the quarter. Secondly, the tempo of the Tigers’ offence was out of sink, as stars like Lenard Copeland, who at that time was sixth in league scoring, was unable to find the looks he had at the start.

With all of this chaos, as well as a poor effort in rebounding, the Titans were able to muster a massive quarter, leading at the half, 60-53.

But no Titans fan or player felt safe after watching Gaze on the very first play, drill his way into the paint for a two-pointer, only now reaching double digit points. Gaze, along with what seemed to be every other Tiger, began making every second shot they took. Finishing the third quarter shooting 60 per cent for the game as a team, the Titans were able to stick around by not allowing any easy buckets and clobbering the boards on both ends. Both teams were now facing off for the last quarter, with the Tigers only leading by a point.

The fourth quarter looked like a final. The intensity was epitomised through Frank Drimic’s drive to the rim, resulting in the big man receiving a nasty yet unintentional elbow to the face. The big man who was currently sitting at 21 points and seven rebounds was required to remove the blood spilling from his nose before play was resumed.

This was only one of many examples of hard charges, diving knees, swinging elbows – all giving the game a worthy name. But with one minute remaining, scores tied, only one team would walk out with their heads high. The Tigers had possession but threw up an ugly contested jumper. The rebound was tipped by both teams and swung out of bounds. The Tigers now had a second go around to win this game. Copeland who had been hot all night missed a contested layup, no timeouts, the Titans running up transition, Darryl McDonald threw to Drimic for the three but missed, forcing over time.

Just to be expected, the overtime period continued the back and forth nature that had characterised the game all along. Until there was only 35 seconds on the clock, Tigers again with the ball, now down by one. The odd differential meant this play was either to win or lose. Gaze and Copeland played hot potato until Bennett Davison found an opening, easy two.

With 25 seconds on the clock and a Titans ball, McDonald took two defenders on runs baseline and threw up a floater, nothing but net. Siren goes and the stadium roars in cheers.

McDonald was just excellent all game so it worked that he took the final shot, finishing the game with 23 points, four rebounds and four assists. A real offensive exhibit for someone who led the league in blocks and steals that season while Gaze was spectacular with 26 points along with seven assists.

These teams faced each other again in the semi-finals, only for Titans to come out on top once again, finishing the series 2-0, just to go all the way to the Grand Final to place second.