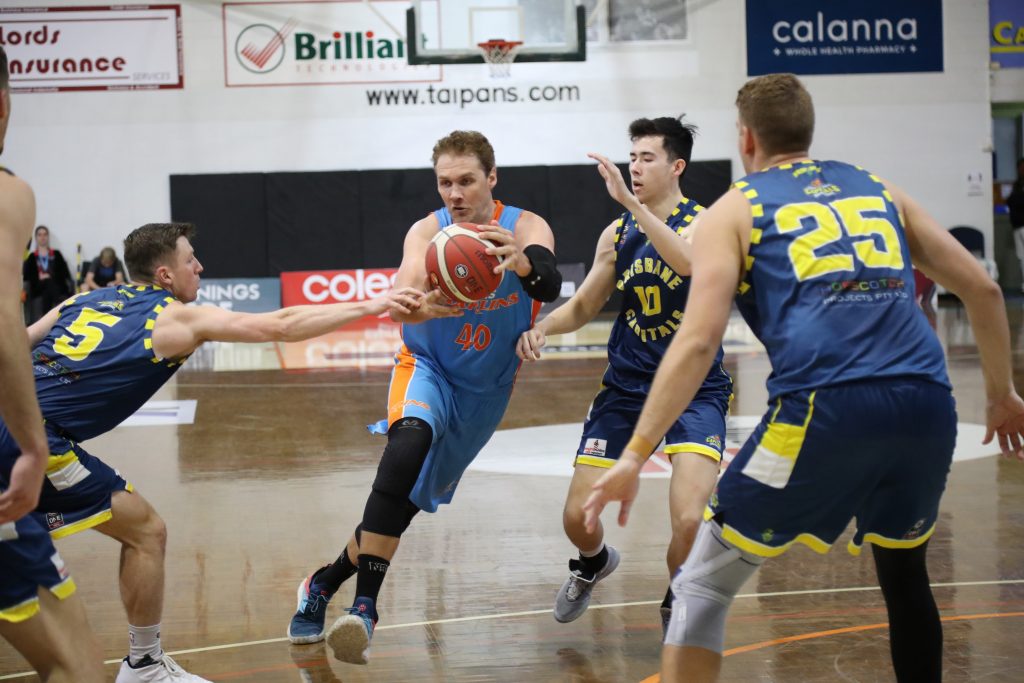 IN an unimpeded National Basketball League (NBL)1 North competition, there were some serious thrillers that played out across the men’s and women’s divisions in Round 11.

Townsville and Brisbane gave fans a Saturday night show after the two sides couldn’t be separated in regulation time. The back-and-forth contest was settled by a dominant overtime display from the Heat who came out 10-point winners, giving the home crowd plenty to cheer about at the StarFm Stadium.

Early on it was a tough battle, with Peter Crawford nailing a couple late threes to ensure the Heat led by five points at the first break. Ben Volkman and Nicholas Stoddart landed the first two blows for the Capitals to begin the second quarter as it remained tight before the Heat rallied late to lead 52-44 at half time. The third period was even, with Matthew Rees hitting a jump shot to stretch the Heat’s lead out to 11 points early on, and then the Capitals making some shots themselves to reduce the first half deficit by one heading into the final break.

A defence dominated last quarter saw both teams combine for just 28 points. Sam Froling led a block party with four massive rejections in the final term, while Jalen Patton-Croker and Crawford also had one each. The Capitals defence was strongest though restricting Townsville to just three made field goals for the quarter (10 points total). Didan Toto (two blocks, one steal) led the way showing off his defensive presence. While Brisbane didn’t make a heap of shots themselves, Stoddart’s two-pointer with 40 seconds remaining drew the scores level. A frantic last 30 seconds followed with the Heat’s Patton-Croker rejecting Stoddart, giving Ethan Betts a chance at a three-quarter court effort that only just missed, bouncing off the back iron and sending the game into an additional five-minute period. Overtime was a one-sided affair as the Heat started with a 12-0 run, and the Capitals were never able to pull themselves back into the contest. Froling added another two blocks to his name to assert his dominance at the rim, as the hosts went on to win the contest 100-90.

There were plenty of contributors for both teams on the night with Betts (12 points, 13 rebounds) and Froling (15 points, 12 rebounds, seven blocks) recording double-doubles for the Heat, while Volkman scored 14 points and 11 rebounds for the away team. Patton-Croker (23 points) and Crawford (19 points) led the scoring for Townsville, with Stoddart (22 points) and Jacob Wilson (19 points) the most prolific offensive options for the Capitals.

The following afternoon the Heat hosted Cairns, with Froling having another strong game scoring 30 points and gathering 11 boards, however the home side were outplayed in a solid second half performance by the Marlins, who were led by Cairns Taipans product Majok Deng (23 points, 12 rebounds) and Alex Loughton (22 points).

Sunday’s victory was the second of the round for the Marlins after they too defeated Brisbane 97-82 on Friday night. Stoddart (34 points) and Volkman (28 points) were big contributors for the Capitals, but they were outshone by Deng who exploded in front of the home crowd for a huge 46 points (20 of 27 field goals made), 16 rebounds (five offensive) and two blocks.

Meanwhile, the Gold Coast Rollers also recorded two victories in round 11, defeating Red City Roar and South West Metro Pirates to extend their unbeaten run to five games, and USC was the third side nailing a couple victories over the weekend. Rip City’s Tanner Krebs had 32 points in Saturday’s win against the Phoenix, and he added another 33 points in Sunday’s matchup against Northside.

Top of the table Logan Thunder defeated Southern Districts by 33 points and second-placed Mackay had a close game with Ipswich, eventually winning the contest 79-75.

Round 11 action in the women’s draw was headlined by a clash between the two giants of the competition. Southern Districts Spartans and Logan Thunder both entered the round undefeated, with the Spartans having won all 11 of their games, while the Thunder had recorded 12 successive victories. The game did not disappoint either with both teams having their chances to take the number one spot in the competition. A big last quarter from the Spartans was the decisive factor as they ran over the top of the hosts to clinch a 12-point victory at the Bendigo Bank Cornubia Park Sports Centre.

The first quarter was evenly poised as the Spartans heated up from beyond the arc, sinking five first quarter threes including three from Maddison Rocci alone. This would later prove to be a good scoring source for both team on the night as the Thunder shot 11 of 32 three pointers (34 per cent) and the Spartans made an impressive 15 three pointers from 32 attempts (47 per cent). At quarter time the scoreboard showed the visitors narrowly ahead by just three points. As the second quarter progressed it was much of the same with the home team trying to wrestle back the lead. The quarter went up a notch when Mikaela Cann sunk a triple at the 6.59-minute mark to spark a remarkable run of seven out of eight scores all coming from deep. Kalani Purcell’s field goal put the Spartans up by two points, before the last minute of the second term went without a basket. That meant Southern Districts entered half time with a 44-42 lead.

With neither side willing to give in, the battle continued to entertain fans as the two teams went blow for blow in the third quarter. Eight points to Carla Drennan in the last few minutes of the term helped the Thunder edge in front by two points heading into the final break. A blistering start to the last quarter from the Spartans had the home team under the pump early. Rocci, Nadeen Payne, and Ash Karaitiana all hit three pointers before a Purcell basket made it a 10-0 start in the visitor’s favour. Mikaela Ruef broke the Spartan’s run, but the Thunder couldn’t regain the lead, as Southern Districts came away with an 89-77 victory.

Cann (18 points, six assists) and Ruef (14 points, 16 rebounds, five steals) were impressive for Logan, while Payne (20 points), Rocci (21 points), and Madelyn Willey (21 points) were all offensive threats for the Spartans. Purcell was another contributor for the travelling team completing a double-double with 16 points and 12 rebounds.

Elsewhere, the Gold Coast Rollers had a successful weekend with two victories. This included a 50-point slaughtering of Red City, led by Casey Samuels (29 points) on Friday night, and a much closer 64-60 victory against South West Metro Pirates on Saturday. The two wins has the Rollers sitting in sixth position. Up North, Townsville also added two wins to their name at home with a 28-point victory over Brisbane and a staggering 62-point demolition of Cairns. Mia Murray led the team on Sunday with 26 points, while all 11 of her teammates also scored in the win against the Dolphins. The loss for Cairns came after Friday’s home defeat to Brisbane, as they went down 75-99. USC Rip City had similar luck in round 11, losing both their matches to the Phoenix and Northside, the latter who also defeated Red City Roar 84-66 on Saturday. Courtney Woods was a key part of the Wizards’ success over the weekend scoring 29 and 23 points in their two wins.