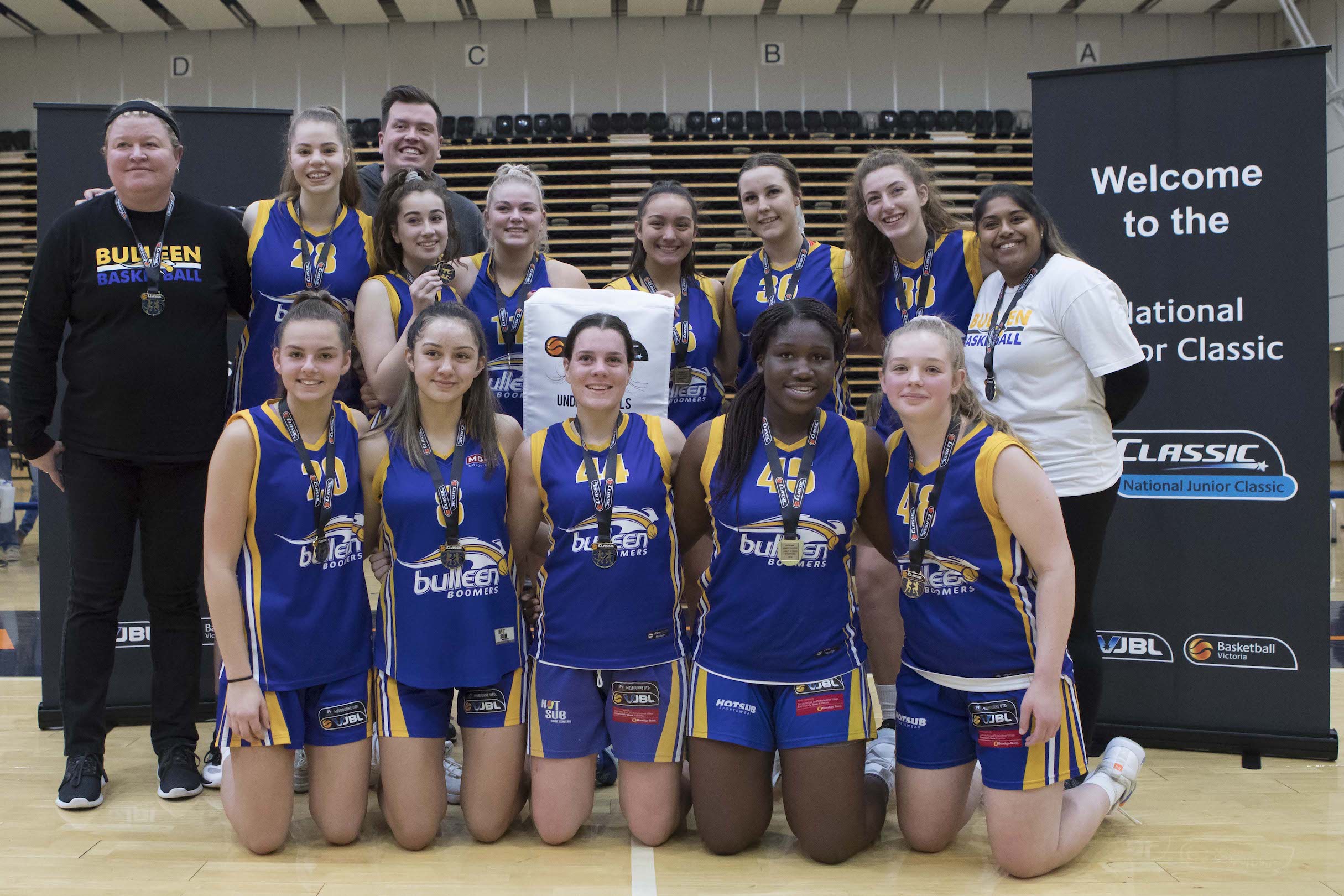 BULLEEN Boomers, Dandenong Rangers and Eltham Wildcats have enjoyed National Junior Classic titles on home soil, while Sturt Sabres headed back to South Australia with the Under-18 Boys flag. We take a look a the winners in each of the Under-18 and Under-16 grades.

A mammoth effort from Most Valuable Player (MVP) Casey Valenti-Paea helped Bulleen Boomers across the line in a two-point thriller over Forestville. The visitors led in the first half, but a second half surge from the Boomers saw them race back into contention. Ably assisted by Maeve Chaplin (16 points), Ally Keating (13) and Erin Riley (eight), it was fitting that Valenti-Paea would deliver the final blow to the Eagles, delivering a lay-up in the dying seconds to ensure a narrow victory. The victory came after wins over Sturt Sabres (54-48), Bendigo Braves (66-59) and Manly Warringah (70-44) in Group D, before finals wins over Southern Peninsula Sharks (76-59) and Dandenong Rangers (66-48) in the lead-up to the decider.

Bulleen Coach Sam Thornton said: ““We knew that we were playing a classy club – they’ve been in the last four Under-18 Classic finals and have won three of them,” Thornton said. “The point I made to our group beforehand is that we have to have the utmost respect for the way they play. They come over here really well prepared – but we knew it was going to be tough.“The girls had played a tough game yesterday against Dandenong, we had a different game plan against Dandenong. “I’m just proud of our girls that they stuck to the game plan – it’s a very proud moment.”

A high-scoring thriller treated spectators in the Under-18 Boys decider with South Australian side, Sturt getting up over Melbourne Tigers by just two points. Sturt’s Joel Dyer was named MVP after sinking a remarkable seven three-point attempts on his way to 25 points, teaming up well with teammates Keanu Rasmussen (13) and Seb Griffin (10). Josh Giddey (30 points) was the star for Melbourne in defeat, while Patrick Twigg (16) was also strong. Sturt overcame a Group D loss to Norths Bears to post wins over Melbourne and Dandenong Rangers, then made it through the finals with victories over Diamond Valley Eagles and Nunawading Spectres before eventually making it two wins over the Tigers for the tournament.

Sturt player Seb Griffin said: “We pulled it out in the end,” Griffin said. “(Sturt talked about) just to keep doing what we were doing – we had a tough loss Saturday night but we pulled it out yesterday and we kept going on that. “We get a challenge every game – Victorian teams play hard ball for 40 minutes every game and we don’t get that a lot in SA (South Australia), but it’s good to come out as champions. “They (Melbourne) got us in under-14s and we know they’re going to bring the challenge and it’s good to bring it out in the end.”

Dandenong Rangers’ Under-16 Girls have saluted in a strong performance over fellow Victorian powerhouse, Nunawading Spectres. Dallas Loughridge sank 11 points and was rewarded with the MVP award, while Myah Healey (15) and Nyadiew Puoch (13) were equally as impressive for the Rangers. The Spectres had plenty to smile about despite the defeat with Olivia Morris (14 points), Evie Curtis (12) and Yoshika Cook (10) all putting in solid performances. Dandenong had defeated Nunawading by 10 points earlier in the tournament through the group stage, as well as Southern Tigers and Sydney Comets. On the way to the decider, the Rangers also knocked off Forestville Eagles and Keilor Thunder.

Dandenong Coach Lloyd Klaman said: ““Everything starts and stops with our defence – whether we’re playing man or zone – we get a lot of offence off our live ball turn overs. “When we get a run on we can score in bunches and that’s what tends to happen – we weren’t shooting the ball real well, we finally hit a three late in the game, we didn’t hit a lot of threes but it worked out well in the end.”

The Wildcats enjoyed a narrow two-point win over fellow Victorian side, Bulleen Boomers in a 64-62 thriller. Kristian Ferronato sank 14 points and was named MVP for the game, while Zahn Agosta (18) and Brad Moorey (15) were also busy for the Wildcats. Joel Foxwell (16 points) and Daniel Johnston (15) were the best for Bulleen in the tight loss. Eltham’s title came after wins over teams in three states. They defeated Central District, Keilor Thunder and Sydney Comets in the group stage, before overcoming Maffra and Sturt Sabres in the finals on the lead-up to the victory over the Boomers.

Eltham Coach Chris Cameron said: “It’s been a really hard weekend for us, trying to take it one game at a time and I’m immensely proud of them,” Cameron said. “They’ve done everything I’ve asked and basketball is a great game but it goes both ways – there are always going to make runs and I thought we were really good at negating that “We knew Bulleen beforehand, we played them and they are amazing. “We knew we’d have to be on it so I guess we talked about runs and tempo of the game and time and place. “I thought we did a good job of knowing when to shoot it, when to hold it and how to play some D. “Seeing them evolve over the weekend it makes you really proud.”