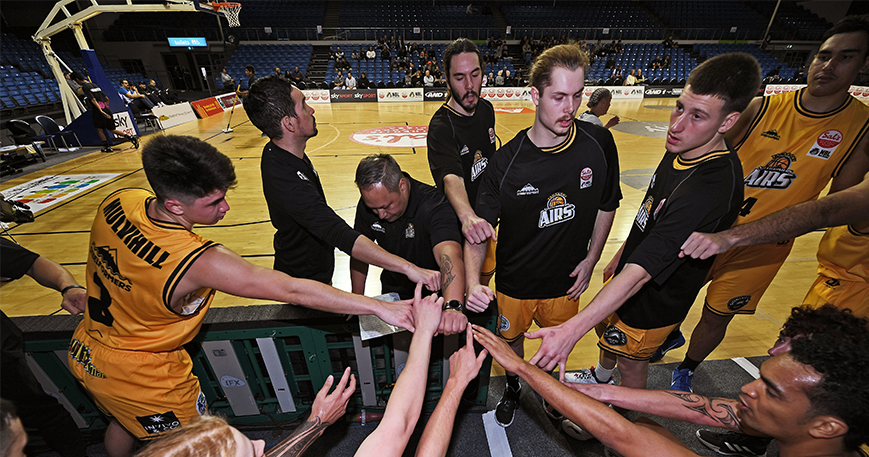 COMING off a loss last night the Taranaki Mountainairs came out with a real fire in the belly downing the Otago Nuggets (107-81). It was a game of two halves with the Airs taking full control in the second half and going on a scoring spree to overrun the Nuggets who simply could not keep up with the frenetic pace of the game.

It was a shaky opening couple of minutes for both sides, littered with turnovers, forcing the ball to swing up and down the court. But the Nuggets were the first team to settle with Kane Keil delivering and Jordan Hunt quickly following suit.

After not hitting the scoreboard in his previous outing and opting to share the ball around, Jarrod Kenny announced himself for the Nuggets hitting an important triple and backing it up hitting three consecutive threes. With five minutes left in the quarter the Nuggets seemed to have the control establishing a commanding nine point lead 7-16. The good times kept on rolling for Otago with big man Jordan Ngatai sinking a huge triple from down town before Marcel Jones fired back for the Airs in what turned out to be a good old fashioned three point shoot out with both sides knocking back a collective eight triples before quarters end.

The free scoring continued with Francis Mulvihill kicking off his campaign in style amassing nine points for the term. Despite both teams shooting from range they were plagued by inaccuracy, unable to capitalise on their scoring opportunities and often sending the ball rocketing down the other end in the blink of an eye given the speed of the game. The quarter was dictated by the Nuggets and their perimeter passing along with their vision to look long down the court and deliver to a teammate on the break holding a six point lead.

The second quarter was just as exciting with the Mountainairs able to dwindle down the lead by a point at half time. Shane Temara got the Airs off to a good start sinking a timely jump shot before Kenneth Tuffin chimed in with his strength around the rim to drag down a couple of big rebounds and impressive block. With increased pressure across the court it was starting to show on the scoreboard with the Airs sitting at 39 per cent and Nuggets at 38 for field goals showcasing just how intense the battle was.

Struggling to get into the game Derone Raukawa found his stroke hitting his first points of the game at the six and a half minute mark to reduce the margin to a mere one point. Moments later things were all tied up with the Airs pushing hard. But the class of Ngatai shone true with the Nuggets big man on song and  finding his stroke with ease, while his sides slick ball movement caused havoc for the opposition. Raukawa continued his good form using his burst of speed to explode out of the blocks and score but was rivalled by Hunt for Otago.

Despite the Mountainairs getting back within one point midway through the term the Nuggets managed to push the lead back out to five points credit to the likes of Ngatai and Hunt who were hungry for the ball and able to convert when within range.

With play seeming to rest with the Nuggets the Airs came out with a renewed sense of intensity and hunger, suffocating their opponents every move. Their offensive pressure was well and truly up with Mulvihill hitting the scoreboard with ease especially when it came to shooting from beyond the arc while Temara elevated his game even further. The duo dominated heavily in the opening couple of minutes of play with Jones also having an influence.

Tuffin continued to find his stride, sitting at 15 points for the game with just under seven minutes left in the quarter. The efforts of Temara and Jones did not go unnoticed with the two hustling hard to win the ball back for the Airs and peg away at the deficit.

Team efforts from Taranaki saw the side take the lead at the seven minute mark and while Ngatai level things at 56 points apiece Raukawa fired back, sinking two from two at his free throw to regain some control of the game. Although Jones struggled to make his jump shot it did not seem to trouble the steam train that was the Mountainairs in the third term, out rebounding their opponents 38-22 and scoring with ease. The youngster in Carlin Davison started to have an impact for the Airs, finding the rim with ease and most importantly delivering, catching the Nuggets off-guard to a certain extent.

The Airs seemed to have all the momentum in the final minutes of the quarter with the Mountainairs taking the lead and extending it to a whopping 11 points. It was a complete performance from Taranaki in the third quarter with the side piling on a staggering 37 points while restricting the Nuggets to 17 in comparison.

With the win up for grabs, the Airs did not look like backing down with Jones sinking it from down town and subsequently pushing the lead out to 15. As the game went on the Airs played with more and more confidence with Raukawa and Temara seeming to have the ball on a string.

Despite the best efforts of Ngatai and Kenny it was simply not enough to get their side back in the contest with the Nuggets only managing 27 points for the second half compared to the Airs who went on a tear with 57 points. The Mountainairs played with speed and were simply unstoppable with the ball pinging across the court and players shooting from here there and everywhere to run out with an impressive 26 point victory.

All of the Airs starting five reached double figures with Raukawa top scoring with 23 points along with four rebounds and six assists. Temara was next best with 18 points and 11 rebounds. Mulvihill was not far behind with 17 points while Jones starred with a whopping double-double consisting of 15 points and 18 rebounds.

For the Nuggets it was a three man show with Ngatai leading all comers with his 22 points while efforts from Kenny (18 points, six rebounds) and Hunt (16 points, seven rebounds) shone true but was not enough to get over the top of a rampaging Airs side.