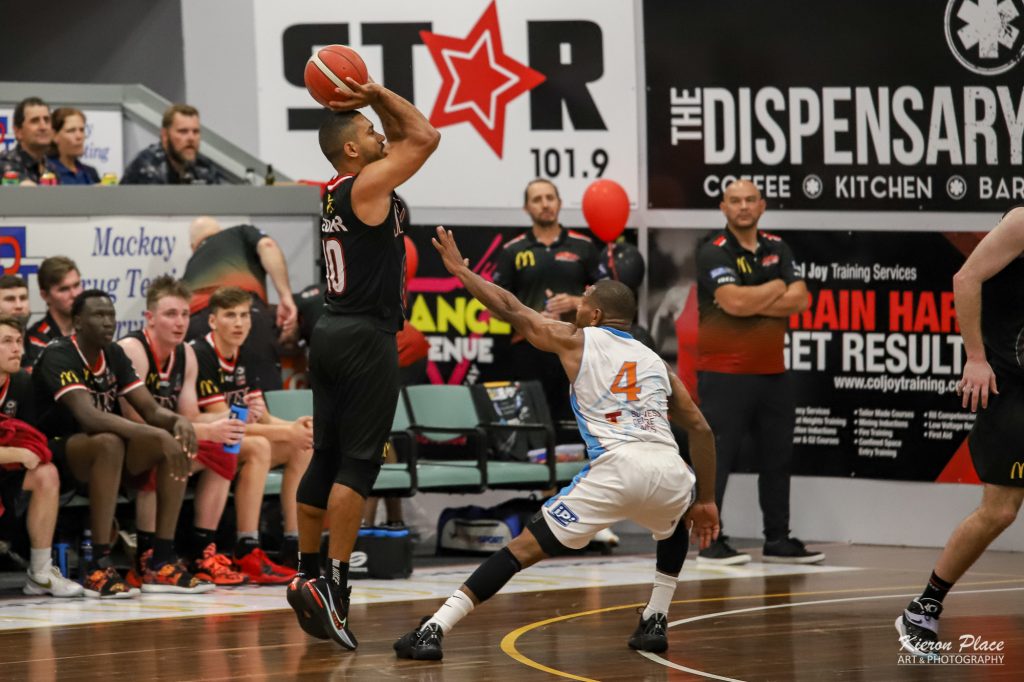 MACKAY Meteors have claimed the 2021 National Basketball League (NBL)1 North Men’s title, winning game two in a thrilling overtime contest against Cairns Marlins by three points. The result was an identical margin to game one, showing not much between the sides, but the Meteors proved that little bit better again, closing out the need for a third game, to win the series in two straight. The match itself looked to be going the way of the visitors at half-time, before Mackay hit back in the second half to level it by the final buzzer, and then edge ahead in the first overtime period for an 86-83 victory.

The first quarter was relatively even across the board with Mackay leading by a point courtesy of a high-scoring 24-23 term. Cairns hit back with a dominant second term to pour on another 23 points, but restrict the home side to just 14 themselves. A lower scoring third term resulted in the Marlins extending the lead by two more thanks to a 15-13 quarter, before Mackay made its move in the last, piling on 26 points to 16 and come back from the death – and a double-digit deficit at the last break – to level the scores at the final buzzer.

Trailing by as much as five points with 1:24 left on the clock after Marlins’ Anthony Fisher scored, the Meteors got to work, with Villarni Foketi nailing a long-range jumper with 1:16 and then Jerron Jamerson hitting the two-pointer after a Marlins turnover at the 51-second mark. Both sides had chances in the final 30 seconds, including a last second jump shot from the Marlins, but it would miss sending the game into overtime.

The teams went basket for basket in overtime, and it was not until Jamerson drew free throws with 14 seconds left to lead by two, and then with a missed shot from the Marlins, the Meteors earned the deliberate foul and scored one of two from Kye Medhurst at the line for a three-point lead with five seconds remaining. Deba George was tasked with the three-point leveller attempt but it missed, and the Meteors were declared champions.

Cairns dominated the rebounds (55-48), but it was Mackay that lad the assists (17-13), and scored at a marginally higher clip (38.3 to 37.2 per cent), also hitting 12 three-pointers to eight in an otherwise even contest. Both sides were relatively low on turnovers and personal fouls, as Mackay did enough to salute in the championship game.

Jamerson finished with a massive double-double for the Meteors, putting up 24 points, 10 rebounds, six assists and two steals in an outstanding effort for the winners. Medhurst also managed a double-double (10 points, 11 rebounds) with three of four from long-range, whilst Foketi had 20 points and five rebounds. Emmanuel Malou (17 points, nine rebounds, three assists and two blocks) and Christopher Cedar (10 points, four rebounds and four assists) were other double-figure scorers.

For the Marlins, they also had five double-digit scorers, led by George who produced 20 points, five assists, four steals and three assists, though only two of 11 from three-point range. Fisher had a massive double-double of 18 points and 14 rebounds, while Alex Loughton (15 points, seven rebounds) James Mitchell (12 points, seven rebounds and four assists) and Curt Ahwang (12 points and five rebounds) were also impactful in defeat.

The Mackay win means the Meteors have closed off the series in two and go home with the title.