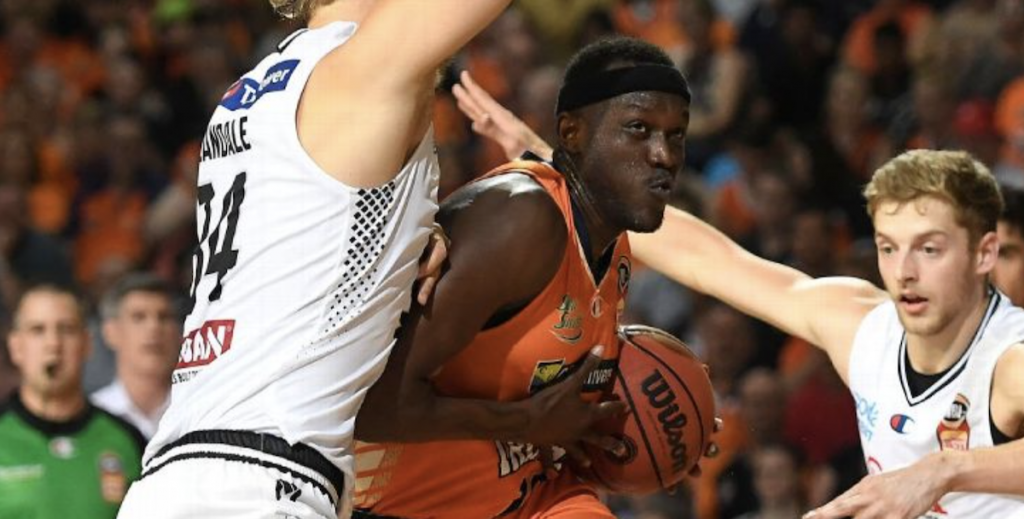 MELBOURNE United will return home in Round 3 with two wins under their belt through the first two rounds of NBL action, after edging out an 87-85 victory up in North Queensland last night against the Cairns Taipans, garnering more attention as one of the NBL’s top contenders for the 2021 fixture.

Inside the opening minute, Melbourne threw the first strike of the contest after Cameron Oliver was given two quick fouls forcing an early rest, which would allow United to gain the upper hand to start the game.

The first real run came at the midway point of the first when Chris Goulding knocked down his third triple in three attempts from the field, securing an eight-point lead in the process and restricting the Taipans’ home-court advantage.

Walking into the second quarter leading 29-21, Melbourne killed it from beyond the arc with seven first-quarter threes compared to Cairns’ three, while also earning a plus-five on the boards in this time (11-6).

It was a balanced affair to begin the second with each side trading buckets, before a quick 5-0 run brought Cairns back to within a possession. Shortly after, it was new signing Jock Landale that took the game into his hands hitting back-to-back threes, deflating the momentum that that the Taipans had conjured up.

On a more positive note for the home side, the fans were treated to another spectacular alley-oop jam from Scott Machado to Oliver, but failed to make any significant headway in cutting down the deficit before half-time still trailing by six points, down 45-51.

After two, it was evident that Cairns needed to slow the roll of both Goulding and Landale with the two star players compiling 12 and 14 points respectively. Meanwhile for Melbourne, it was a matter of neutralising one of the best frontcourt players in the NBL, with Oliver sitting comfortably on 11 points and five rebounds after the first half.

The Taipans’ efforts to draw even with United continued as Mirko Djeric and Kouat Noi added the extra support needed to make that so, and after Noi converted on his third three of the game, Cairns found themselves just a single point behind with a few minutes remaining in the third.

A six-point swing in favour of United saw them balloon the margin back out to seven points at the final intermission, meaning that Mike Kelly now needed to delve deep into his side’s schemes to try and conquer the seemingly insurmountable wall that Melbourne had set up.

With the clock continuing to wind down and Melbourne pulling away further and further, those in attendance started to become restless, as Cairns could not figure out a solution to overturn last night’s result.

It had to be last season’s MVP runner-up Machado if anyone was going to make a last run happen for the hosts and that seemed possible with less than a minute left, trailing by one point with 34 seconds on the clock.

After two missed jump shots from Machado with six seconds and one second on the clock, the result fell on the side of the Southerners, as Melbourne squeaked away with the two-point win by the skin of their teeth.

Despite losing, it could be argued that Cairns had the better shooting night, particularly in the second half. But Melbourne’s 42 per cent clip on the night and a plus-four (44-40) in the rebounding category was enough to get the job done, while the Taipans won out in categories such as assists, steals and turnovers.

From the duet of Landale and Goulding, they would account for 36 of United’s points with the former earning man of the match honours after collecting 19 points and seven rebounds. For the latter, it was another terrific shooting performance for Goulding, nailing four threes on his way to 17 points after four quarters. Other double-digit contributors for Melbourne were NBL rookies Jack White (12 points and six rebounds) and Yudai Baba (10 points), while Jo Lual-Acuil impressed in his 17 minutes of play with seven points and 11 rebounds.

Four out of five of the Taipans’ started accumulated over 10 points, with Machado securing the team-high number with 19 points and six assists – excluding his five turnovers. Oliver was instrumental all over the floor with 17 points and 13 rebounds, while Noi added four rebounds and three steals to his 17 points. Djeric finished with a modest 13 points and three assists.

Having won only one outing in their first four, Cairns will need to pull out a terrific brand of basketball if they are going to knock over a Hawks outfit that is in the midst of their best start since 2013 on Thursday night. As for Melbourne, they return back to Victoria to face off with their cross-town rivals the South East Melbourne Phoenix next Sunday, but will have to do so in unfamiliar territory with both rosters showcasing their talents at the historic Bendigo Stadium.