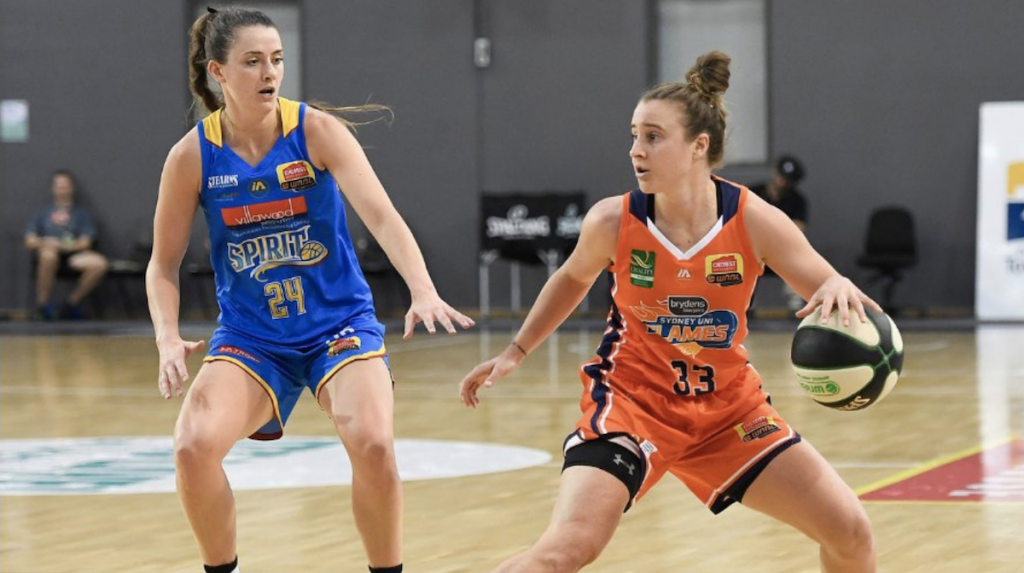 THE Bendigo Spirit have once again suffered a debilitating outcome, going down 63-100 against a red-hot Sydney Uni Flames outfit in Saturday’s opener, who exploded out of the gates with a 34-point first quarter.

Neither team made any alterations to their Starting Fives, with Bendigo lining up Tessa Lavey, Ameilia Todhunter, Mary Goulding, Alicia Froling and Carley Ernst. Meanwhile, the Flames stuck with the formation of Lauren Mansfield, Alison Schwagmeyer, Anneli Maley, Nat Burton and Lauren Scherf.

Both teams were coming off demoralising season opening losses to two of the top ranked sides in the competition, so both sides made the most of their chances early. The Spirit knocked down five of their opening eight attempts, as the Flames stacked it on at the free-throw line, making their opening six attempts from the charity strike, which added to 14 points in the initial four minutes of the contest for side.

It was newly signed recruit Mansfield that led the way for Sydney Uni’s ridiculous efficiency in the first quarter leading to a 34-25 lead, as she would contribute 14 points to the Flames’ 34 throughout the opening 10 minutes. Schwagmeyer also added eight points of her own to the side’s numbers that gave them the solid nine-point buffer after one.

The Flames picked up where they left off, as Burton used her uncanny ability to find the loose ball to convert on two straight attempts in the first minute of the second term. But the Spirit replied in turn, as Ernst hit her third three of the game as Coach Tracy York’s side looked to wind back the early double-digit deficit.

Slowly but surely the star duo of Lavey and Ernst hustled on with their side’s offensive output, minimising Sydney Uni’s lead down to as little as seven points before the end of the first half. However, Shanae Greaves’ bucket with less than a minute remaining in the second put the lead back at 11 points heading into the main break. Bendigo’s tandem would each obtain 11 points by this stage with Lavey in particular dishing out seven assists and grabbing five rebounds through 18 minutes of play.

While the Flames continued to find points after Mansfield’s first quarter, Sydney Uni’s 45 per cent shooting as a team as well as their 11 made free-throws were the main factors in their 51-40 advantage at the mid-way point.

After a scoreless second from Mansfield, she started the third off remedying her scoring drought with her fifth three, which was followed up with a Scherf jumper quickly distancing the two teams by 16 points. Furthermore, the former Lynx prospect continued to shred Bendigo’s defensive schemes, concluding the third with 24 points under her belt and helping the Flames to a convincing 80-54 lead with the final 10-minute phase yet to play.

Bendigo’s woes continued into the fourth, scoring a mere nine points to round out Saturday’s opener. But Sydney kept rolling in their scoring totals, capping off a 49-point second half with 20 more in the fourth, as the Flames polished off Bendigo in emphatic fashion 100-63.

Sydney Uni’s team scoring numbers reflected their mountain of point, shooting 43 per cent from the field and adding 20 free-throws to those shots that missed their marks. Headline outings for the Flames consisted of Mansfield (24 points, five assists and four rebounds), Schwagmeyer (12 points and three rebounds) and Funda Nakkasoglu (14 points off of two threes).

While the highlights were few and far between for the Spirit, who now head into next week winless from their two opening games, Bendigo moved the ball well. This came especially from Lavey, who flirted with a triple-double yesterday tallying 15 points, 10 rebounds and six assists. Ernst produced noticeable numbers as well with 14 points, while young gun Paige Price put on a display of her own with 11 points in 14 minutes of court time.

The Spirit face the two-time defending champion Canberra Capitals to begin Round 2, hoping to keep their opponents under 100 points for the first time this season. On the other hand, Sydney Uni has little time to dwell on yesterday’s triumphs, going up against the Southside Flyers later today.

Everyone knew that winning a WNBL title was not going to be a walk in the park, but not many would have predicted the Southside Flyers going down in only their second game of the season. But this was indeed the case, as the Melbourne Boomers’ exemplary range was enough to strike down the international-level squad.

With both sides maintaining their Starting Fives, the Boomers had Maddie Garrick and Tess Madgen handling the ball with Stella Beck, Ezi Magbegor and Cayla George filling the remaining slots. For the Flyers it was the same five as their first game, Bec Cole and Leilani Mitchell in the backcourt, and Jenna O’Hea, Sara Blicavs and Liz Cambage down low and on the wing.

The Melbourne derby started with a blistering pace from both squads, scoring the majorities of their points early in the offence from fast-break points. But midway through the first quarter a 7-0 run from the Flyers would gift them control of the encounter before the teams’ secondary squads got their shift in the second half of the first.

Two of the best benches in the WNBL were able to show off what they were made of with Southside able to stave off a potential opening quarter comeback from the Boomers to close out a 22-12 lead at the first break.

Melbourne coach Guy Molloy employed his side to play one stop at a time and with this mindset, the Boomers would climb back into the contest six minutes into the second quarter. The side’s captain in George made several great plays including a spot-up three to make it a one-possession game on a 9-0 run.

Despite numerous instances where the Boomers looked like possibly stealing the lead before half-time, Southside’s depth prevented them from doing so. This coupled with Cambage’s second quarter double-double and Cole’s 11 points allowed the Flyers to hold their noses in front at the main break, 40-35, whereas George had 13 points and five rebounds of her own through two terms.

Continuing to hammer Cheryl Chambers’ fortress, a Madgen three would give the Boomers a short-lived lead halfway through the third, which was quickly overturned by Mitchell’s corner three on the next play. This time Melbourne would not waiver in their determination to take control of the possible Grand Final preview, as George nailed her second three-pointer of the game before handing the duties over to the bench.

A strong left-handed layup by Tall-Fern Penina Davidson and a buzzer-beating scoop layup by Beck marked a strong end to what was an out-and-out third phase for Molloy’s roster, as they led by seven at the final break.

Southside’s fourth quarter comeback quest began with a nice post-move and mid-range jumper by Cambage to make the game a shootout between two top teams. Leading the charge was Madgen, who made it rain in the fourth with two pivotal triples to keep the Flyers at bay.

Two more threes from Beck and Ashleigh Karaitiana – her fifth for the night – with less than two minutes to play put the exclamation mark on what was nothing short of a phenomenal shooting night from the Boomers. Melbourne walked away with their confidence sky high, trumping the Flyers 89-72 and upsetting the title favourites.

While both sides shot tremendously, the Boomers shooting 41 per cent and the Flyers shooting 40 per cent, Melbourne made the difference from beyond the arc shooting a total of 16 threes compared to Southside’s four. The same trend could also be found in turnovers, as Molloy’s women forced 16 turnovers, five more than Chambers’.

George turned it up last night with 24 points, eight rebounds and four assists, while Karaitiana shot the lights out from deep obtaining all 18 of her points from behind the three-point-line. Madgen was also a major factor in the same setting, knocking down five threes to go with her 24 points, nine rebounds and five assists. The only concern is that the 30-year-old seemed to roll her ankle severely late in the fourth quarter, forcing her to exit the game early.

Looking to bounce back to their dominant ways in less than 24 hours, the Flyers could not support Cambage’s 24 points and 19 rebounds despite leading comfortably at half-time. Cole and Sara Blicavs each accounted for double-digit totals with 13 and 11 points respectively.

Melbourne can look forward to a well-earned rest day at the top of the standings, as the Boomers head to Mackay on Monday to face off with the Perth Lynx.