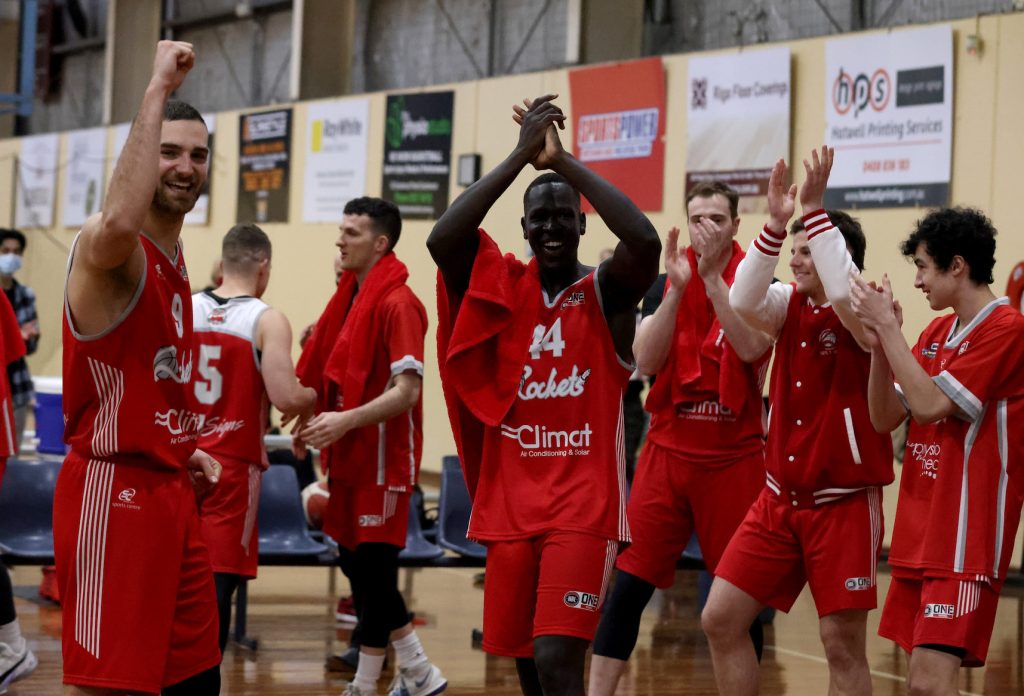 NORTH Adelaide Rockets have launched at the right time of the year, to take down the minor premiers Sturt Sabres and post an impressive 17-point win (86-69) on the road to reach the 2021 National Basketball League (NBL)1 Central Men’s Division Grand Final. The Rockets started the season at 1-6 and looked way off the pace, but have piled on 12 wins in their past 14 games to rocket into fifth spot, and then take down three of the top four sides above them, with only third placed Norwood Flames standing in their way of the title.

Coming out with real intent, North Adelaide never looked like losing the preliminary final, dominating the Sabres from the first whistle. The Rockets slammed home 30 points to 17 in the opening quarter to lead by 13 at the first break, before a complete one-sided obliteration of 36 points to 11, to hold a 66-28 lead at the main break. The 38-point margin had already put the result beyond doubt, which allowed the Rockets to manage in the second half, with the Sabres reducing the deficit thanks to winning the second half, 41-20. It was too little, too late however as the Rockets celebrated the vital 86-69 win to advance through to the decider.

The two NBL talents out of the Adelaide 36ers lit up the court yet again for the Rockets, combining for 59 points in what was an eye-catching display. Sunday Dech was unstoppable from beyond the arc, draining seven of 10 from long-range – for 10 of 15 overall from the field – for a total of 31 points, four rebounds and four assists on the night. Jack McVeigh produced a big double-double, with 28 points – 12 of 17 from the field – and 12 rebounds, as well as three steals.

Tobias Dowdell almost recorded a double-double for North Adelaide with nine points, 11 rebounds, three steals and two assists, while Hamish Staude picked up nine points, six assists, three rebounds and two steals in the win. Jimma Dau chipped in with five points four rebounds and two assists in his 21 minutes on court, while Verle Williams was limited to two points – with a woeful none of 10 from the field very uncharacteristic from him – though he still contributed with three assists and three steals.

Sam Daly lead the way for Sturt with 21 points, eight assists and four rebounds in defeat, the clear standout scorer. Tom Goodall was next best with 14 points, six rebounds and two assists in 22 minutes, while high-scorer Joel Spear only hit four of 12 from the field for 11 points in 36 minutes, though still managed seven rebounds, two assists and two steals. Daniel Nash (eight points, seven rebounds and two assists) and Max Calligeros (11 points, six rebounds) were others who stood up in the loss.

Now North Adelaide set their sights on Norwood Flames at St Clair Recreation Centre on Saturday night, with both the women’s and men’s teams in action. The women’s side faces the Southern Tigers from 5:30pm local time, with the men’s locking horns with Norwood Flames from 7:45pm.