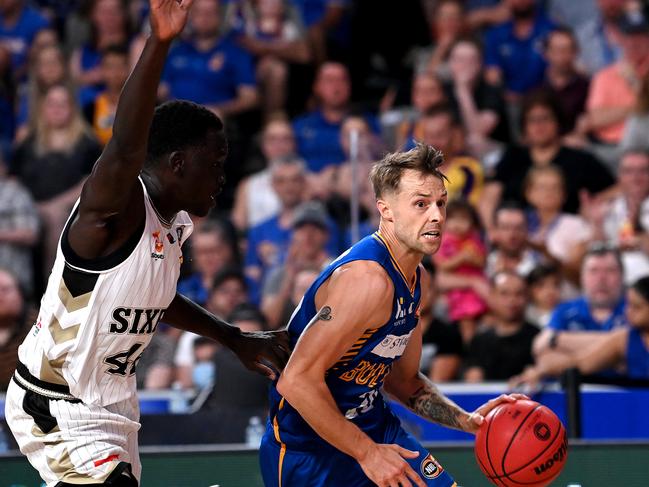 THE final game of Round 5 in the National Basketball League (NBL) ended in the Brisbane Bullets’ favour with the away side posting their fourth win of the season, a 19-point victory over Adelaide 36ers (93-74). The Bullets caused an upset win over their higher ranked opponents as Adelaide failed to get their signature play up and running, left shellshocked by Victor Law who left no stone unturned in the opening half of play to produce 19 points.

Adelaide claimed ascendancy in the first minutes of the quarter pushing out to as much as a five points ahead but were unable to maintain that level of intensity throughout the remainder of the term. The lapse allowed for Brisbane to find their groove and turn the tables to create a handy buffer themselves. Up by three points at the first change the Bullets appeared to have a firm grip on the game at hand and looked to push the buffer out at every turn sneaking out to 10 points at half time thanks to a dominant second term. Brisbane were relentless in attack throughout the second piling on 30 points while suffocating the scoring flow of their opponents to limit them to 23 points.

Their dominance continued into the second half of action as the Bullets could not be denied as some experienced heads stepped up to the plate and delivered. On the other hand the 36ers struggled to combat the offensive pressure the Bullets were applying and could not generate a high enough input to worry their opponents. Although the final term of play was closer with Adelaide managing 19 points and the Bullets adding 20 to their tally, the damage was already done as Brisbane had dominated from go to woe.

Given the scoreline it is no surprise that Brisbane had the upper hand in most shooting statistics boasting a better field goal percentage of 45 compared to 36 per cent. The Bullets also led the charge for three-point accuracy downing 11 of their 28 attempts at 39 per cent as opposed to Adelaide’s eight from 27 at 29 per cent. Accuracy from two-point range also favoured the victors shooting at a 48 per cent clip while the 36ers managed 40 per cent accuracy with their conversion of 18 from 45 attempts.

The Bullets secured more rebounds than their opponents (49-38) displaying their overall strength off the boards while also leading the steals department with five to four. Adelaide impressed with ball in hand to narrowly record more assists, 21-20, while their bigmen played an integral role laying five blocks to two in the clash. When it came to turnovers neither side could be separated, registering eight apiece and highlighting the overall cleanliness of the game.

There were two main contributors for Adelaide throughout the match as Daniel Johnson topped the table for points thanks to his 20 across his 33 minutes on court. He also managed to reel in eight rebounds and four assists. Teammate Isaac Humphries proved to be a handy option posting 15 points along with eight rebounds, two assists and two blocks as youngster Josh Giddey continued his merry way with nine points, eight assists and four rebounds. Although Sunday Dech did not have an influence on the scoreboard the guard collected seven rebounds with five of them defensive.

An inspired performance from Law was what got the Bullets over the line with the star import once again proving his dominance knocking back 27 points and falling just short of a double-double credit to his nine rebounds. Law was a real playmaker for the Bullets impacting the play in every which way but was ably assisted by the likes of Nathan Sobey who sunk 19 points of his own. Sobey did not shy away from the contest amassing five rebounds and six assists as Orlando Johnson also imposed himself on the match with his 15 points and nine-rebound effort. Matthew Hodgson also played a key support role as shown through his eight points, nine rebounds and three assists.