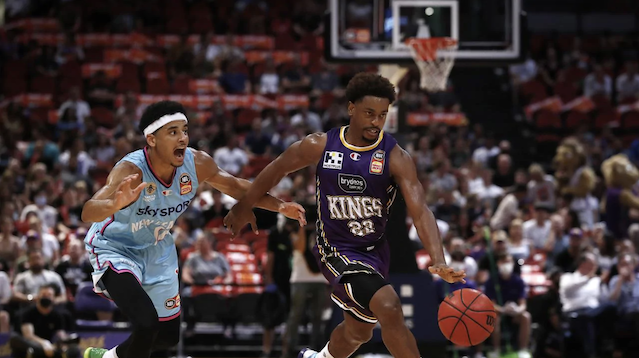 SYDNEY Kings piled on 13 consecutive points late in the match against New Zealand Breakers to win by 10 in their National Basketball League (NBL) clash at Qudos Bank Arena last night. In front of almost 6000 fans, the Kings stood tall after the main break where both teams were level, to find their rhythm and record the memorable win to level out their win-loss record at 3-3 and secure an 84-74 win.

The first half was as balanced as it goes with the teams 18-18 at quarter time and then 38-apiece at the main break. A 26-23 third term was the highest scoring quarter of the match, before the Kings restricted the Breakers to just 13 points in the final quarter, whilst putting on 20 points themselves to take home the win.

It almost seemed like the Breakers were going to finish stronger with Corey Webster‘s two-point pull up jumper with less than five minutes remaining edging the visitors ahead by a point. A remarkable 13 consecutive points from the Kings, with Dejan Vasiljevic, Jarrell Martin and Casper Ware all putting up baskets, before a late consolation triple to Lamar Patterson cut the final deficit to 10 by the buzzer.

Ware ended up winning player of the match courtesy of his 22 points, three rebounds and two assists, but he was far from alone on the scoring front. Martin (20 points, six rebounds) and Vasiljevic (17 points) both recorded double-figure points, while Shaun Bruce (nine points, four rebounds, four assists and two steals) and Brad Newley (nine points, six rebounds and three steals) worked hard defensively and contributed on the scoreboard as well.

For the Breakers, it was Corey Webster who racked up a match-high 25 points coming off the bench in 30 minutes of play, whilst picking up three rebounds and two steals. His brother Tai Webster was also strong in the back court with 13 points, 10 rebounds, four assists and two steals, while Finn Delany picked up 12 points and eight rebounds. Patterson had a night to forget from a scoring perspective, with just one of eight from the field going in, finishing with six points, six rebounds and three assists.

Sydney Kings head coach Adam Forde described the match as a “grind” but believed the team could take confidence from the game.

“Yeah it definitely was a grind, I think grind’s a nice term for a bit of ugliness about it, but it’s a bit of a confidence booster when you can win like that,” he said. “We had a focus throughout the game that we highlighted a number of times, and credit to New Zealand they did a good job pushing out of those areas we wanted to capitalise in. “We only had three assists at the half and nine turnovers; we sort of wanted the reverse of that. It was very much a grind type game but to be able to get those stops in the fourth we did, and also use that momentum for the offensive end, we can take a lot confidence away from that type of win.”

New Zealand Breakers head coach Dan Shamir admitted his side was struggling with scoring and needed to fix their woes if they were to start building wins.

“It’s another tough night, we’re obviously in the game. “We were up, I’m, not sure how long to go probably about five or six minutes, 69-65 or so but overall as a group we’re struggling with a lot of simple actions. “I think we played in a lot of areas in control … it’s not enough to win, we’re much better than that. “You’re just touching the offensive end, and it’s very obvious we’re not going to win a lot of games with basically 71 points… we made three in the last second. “But it’s something we need to solve in our heads, and I’m sure we can and we must play much better.”

Sydney Kings take on Illawarra Hawks on Sunday at Qudos Bank Arena once again, while New Zealand Breakers will have a long break to think about their match, also against the Hawks on Monday, February 22.