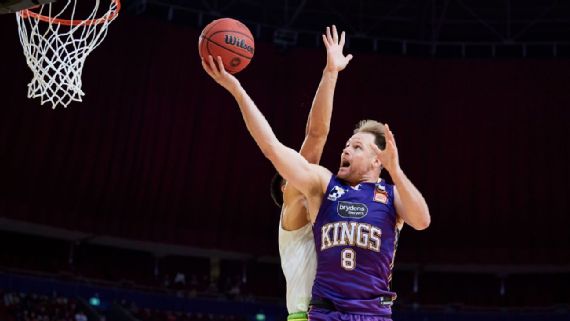 SYDNEY Kings hit back last night, exacting their revenge on the South East Melbourne Phoenix to secure a seven-point victory (97-90). After suffering a 14-point loss last week at the hands of the Phoenix the Kings seemed to have all the answers in this clash to ward off their opponents. Heading into the clash, the Kings were hit with the devastating news that Dejan Vasiljevic will miss the remainder of the season after rupturing his Achilles, but that only spurred on the side which withstood a fourth quarter comeback.

The intention from the Kings was clear from the opening minutes of play piling on the first four points of the game and dictating the terms of the game. their ability to control the ball and the play was second to none, pushing the Phoenix onto the backfoot as they opened up a handy five-point lead at the break thanks to Didi Louzada’s ability to find the basket.

The second quarter was more of the same as the Kings managed to continue on their merry way as the Phoenix endeavoured to drag themselves back into the contest. Tightening things up in defence, South East Melbourne reduced the freedom in which their opponents were scoring but were unable to eat into the deficit with both sides producing 22 points to head into half time staring down the barrel of a five-point margin.

It was a completely different tale in the third as the Kings exploded out of the blocks, wowing the Phoenix and forcing them into panic stations as the game slipped through their fingers. The old firm rung true as both Brad Newley and Daniel Kickert got busy to pile on the scoreboard pressure and create plenty of attacking forays. They were not alone as Louzada continued to make his mark on the game, continuously attacking the rim and sending a warning shot to the rest of the competition after somewhat of a quiet season by his standards so far. Sydney simply could not be denied as they added an impressive 28 points to their total while completely halting the Phoenix in their tracks. South East Melbourne failed to generate any real fluidity in attack, only adding a mere 12 points to their scoreline as the deficit grew to a whopping 21 at the final change.

With it all to play for in the final term it was an unsung hero in developing New Zealander Izayah Le’Afa that led the troops for the Melbourne-based side. He upped the ante in the fourth quarter, sparking an inspired comeback from the Phoenix as Le’Afa proved to have the ball on the strong and the rest of the team drawing off his energy. The cogs really started to tick along for South East Melbourne with the likes of Mitch Creek and Ben Moore finding their touch as the side piled on 33 points to the Kings’ 19. Le’Afa slotted the last six points of the game but unfortunately his fourth quarter heroics were not quite enough to get the Phoenix over the line.

With no Vasiljevic and also missing the services of Jarrell Martin the Kings proved that they have a wealth of depth that are able to step up to the plate and deliver the goods. Casper Ware was well and truly down on his lofty standards recording a mere two points but did get busy with four rebounds and six assists. The real star of the show was Next Star, Louzada who led all comers with 28 points at 72 per cent from the field to accompany his eight rebounds and block. Kickert was a reliable source throughout the match sinking 17 points and six rebounds with Newley also delivering the goods for 17 points of his own at 70 per cent from the field. Jordan Hunter was the sole other player to notch up double-digits with 11 and six rebounds.

For the Phoenix it was Le’Afa who had a game to remember, dropping a game-high 29 points at 62 per cent. It did not stop there as he also recorded two rebounds and three steals in an all-round solid effort. Moore plied his trade with 19 points, seven rebounds and four assists while Creek was influential with 17 points, six rebounds and four blocks. Adam Gibson chimed in with a handy seven points and five rebounds as Kiefer Sykes struggled to find his mojo but still produced four points and five assists.