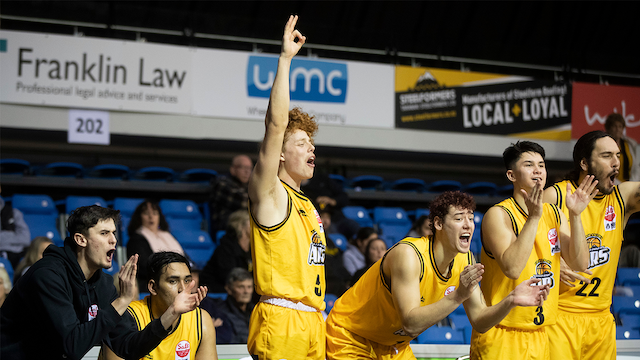 TARANKI Mountainairs have leapt to the top of the 2020 Sal’s NBL (National Basketball League) ladder after winning their fourth match, and halting Franklin Bulls’ four-game winning streak in the provess. The Airs welcomed the return of big man Tai Wynyard who was going to have his hands full with in-form Sam Timmins, as Taranaki ran out 102-88 winners to move into first place on the ladder.

Taranaki started tall on the court as Wynyard immediately posed a problem for Timmins and the Bulls, making the first three shots inside for the Airs to start the game. Having beaten smaller opponents in previous games, Timmins had to find other ways to impact the game.

Young gun and red-hot Isaac Davidson put the Airs on notice early with a clean triple to display his confidence, but it would be his only score for the first half. After a quiet outing last game, Kenneth Tuffin opened his scoring account with a layup off the glass, with big contributor in Franklin’s winning streak Dom Kelman-Poto doing the same soon after. From there, it was all Taranaki.

Mr. Double-Double Marcel Jones would knock down three triples in the first quarter as the lead stretched out to 16. A Kelman-Poto layup would bring the margin back to 14 as the Airs took a 17-31 lead at the first break.

Taranaki were doing it on both ends of the court with seven individual scorers shooting an incredible 81 per cent from the floor, as they forced the Bulls into low quality shots on their way to 33 per cent shooting. Static offence and defence for the Bulls contrasted the Airs’ swift ball movement, as they recorded 10 assists to the Bulls’ 3 in the first term alone.

As the Bulls were looking to move on and get into their stride, Jones hit his fourth three of the game to start the second, on his way to a big night. With Wynyard continuing to lock down Timmins, the Bulls were outclassed in every capacity to give up a 13 points to nothing run, which included a silky dime from Jones for a Shane Temara no-dribble reverse layup.

The Bulls’ first points of the quarter would come four minutes in from Nicholas Barrow, as Jones dribbled it off his foot and out of bounds soon after. This sparked a mini run from the Bulls, until a Dirk Nowitzki-like one leg fadeaway from Mitchell Dance kicked off a huge finish to the half for the Airs. Derone Raukawa and Francis Mulvihill got involved as the lead blew out to a game-high 30, an offensive clinic from the Airs. A Jackson Stubbins triple would end the half, as the Airs would go into the main break leading 29-56.

Quality of shots were still an issue for Franklin as they shot 32 per cent for the half, compared to Taranaki’s 71 per cent, which included 58 per cent from deep. The Airs also recorded 14 more points in the paint, 16 more bench points and nine more assists, as Davidson was held to just three points for the half.

It seemed the Bulls would only be playing for pride in the second half, however, a scrappy loose ball recovery from Timmins would ignite a 23-10 run, bringing the lead back to 14. With a quarter and change to play and plenty of hard work done, the lead no longer seemed insurmountable.

Unfortunately for the Bulls, the third quarter was a tale of two halves: their half, and Taranaki’s half. A technical foul called on coach Liam Simmons would bring the Airs back into the game with a four-point play on the back of a Raukawa free-throw and Jones three-ball.

Undoing all their hard work, the Bulls still trailed 60-80 heading into the last break as the potent one-two punch of Jones (25 points, eight rebounds) and Raukawa (15 points, nine assists) were on fire for Taranaki.

With Kelman-Poto (14 points, six rebounds) leading the charge for Franklin, and Davidson fresh from a big third quarter, a mammoth comeback was set for the Bulls. A strong start saw the lead cut back down to 14 with six and a half minutes left and as Kelman-Poto and the bulls started getting to the line, a comeback win wasn’t out of the question.

Coach Simmons went small with Kelman-Poto at the five position and instructed his team to take it on down the stretch. Unfortunately for Franklin, Taranaki would hold firm as they would trade baskets in what ended up being an anti-climatic finish to the game.

Despite being outscored 13 points in the second half, the Airs would win 102-88 on the back of their two stars Jones (29 points, nine rebounds, six assists) and Raukawa (21 points, 10 assists). Tuffin (10 points, eight rebounds) enjoyed a better outing than his last as Temara (12 points, four rebounds) and Wynyard (10 points, four rebounds, three assists) rounded out a great team display. They will face the Nelson Giants on Thursday sitting in first place, hoping they can replicate this shooting performance.

Kelman-Poto (18 points, 10 rebounds) was Franklin’s best as Davidson’s second half saw him finish the game with 17 points, five rebounds and three assists. Timmins (12 points, three rebounds) and Stubbins (11 points, six assists) were serviceable as they will be looking for more performers in Wednesday’s matchup with the Canterbury Rams.