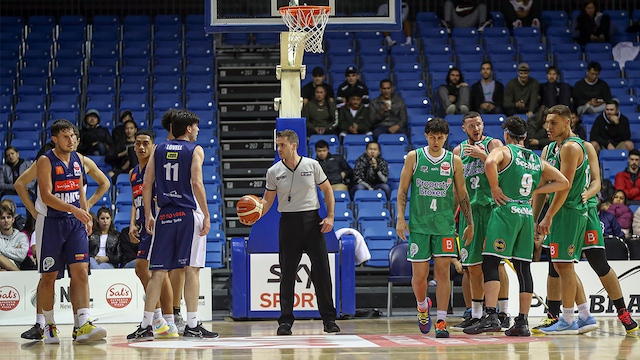 THE last time these two sides met the Giants secured a come from behind win, but the tables were well and truly turned this match with the Manawatu Jets putting on a spectacle especially when it came to sinking them from deep. Despite not having Hyrum Harris in the mix, the Jets went about their business as usual, bullying the Giants and creating plenty of scoring opportunities to run out convincing 30-point victors (102-72).

With three wins apiece under their belt it was a tight contest from the opening whistle with neither side willing to give an inch. Thomas Ingham opened the account for the Giants sinking a triple but it did not take long for the Jets to respond through Ashton McQueen to level the scores. In his first game since coming out of quarantine, Nelson Kirksey added another three to the tally for the Jets in what was shaping up to be a showing of long range shooting. With both sides feeling each other out and settling into the fast paced tempo of the game Michael Karena inserted himself into the contest getting involved in a couple of passages of play and scoring some early points.

As the quarter progressed, inaccuracy seemed to plague both the Jets and Giants with neither side able to sink a shot whether it be from inside the paint or beyond the arc forcing the ball to constantly scream up and down the court. Unable to really find a rhythm it was the Jets that settled first applying a wealth of pressure and most importantly hitting the scoreboard.

Efforts from Kalib Marsich-Mullins and Jayden Bezzant continued to give the Jets the upper hand with the latter converting from down town to push his side out to a seven-point lead with less than five minutes remaining in the term. Bezzant was having things his own way in offence while teammate Taane Samuel had a blistering end to the quarter knocking down five points in less than a minute. With the lead out to 13 points the Giants rallied thanks to Theo Johnson and Nicolas Trathen who reduced the margin to nine heading into the break.

The Giants came out with more intensity and started to find their rhythm in offence with Karena eating into the margin within the opening minute of the quarter to draw back within seven. But Tom Vodanovich proved that anything you can do I can do better with the big man sinking a triple and extending the lead once again. While his efforts in offence were impressive his ability to get back and bring down the rebound also shone, proving to be a real thorn in the Giants side.

Renowned for their physicality, Samuel came off second best with the Jets star notching up his third foul for the game not even half way into the term. With a slight shift in momentum the Jets struggled to find the basket while the Giants found their stroke, sinking them from everywhere to minimise the lead to four. But an unsportsmanlike foul from Riley Bensemann gifted the Jets a couple of free throws and allowed them to regain some control on the game. Following that came an increased defensive pressure from the Jets, smothering every option and pushing the Giants to play the ball around.

Vodanovich upped the ante driving to the basket while McQueen put on a masterclass from three point range. With four minutes left in the quarter McQueen had nine points to his name while Vodanovich was on his way to a triple double with seven points, 13 rebounds and five assists before half time. The Giants simply had no answers for Bezzant who was causing headaches with his 13 points nor Vodanovich with the big man throwing his weight around across the court.

It was a much closer third quarter between the two sides as Karena once again stepped up to the plate for the Giants and steered the ship. It was the usual suspects for the Jets doing all the damage with Vodanovich and Bezzant combining well across the court and regularly hitting the scoreboard while Samuel and Kirksey also got involved in the action, helping to open up a 20-point lead at the six minute mark of the quarter.

Some good ball movement from the Giants allowed them to swinging the ball around the court and keep the Jets guessing with Dane Brookes sinking a timely basket from inside the paint. Samuel registered his fourth foul for the game subsequently forcing him to the bench for large chunks of the game. Meanwhile a hungry and revitalised Giants outfit fought back, with a couple of their young guns stepping up to the challenge with Josh Ledger and Tysxun Aiolupotea leading the charge on the scoring front. Finding their mojo across the court the Giants managed to cut the margin to 17 at the final break.

It was a dominant fourth quarter from the Jets who simply capitalised on every opportunity that swung their way. They impressed with their speed through court to slice through the Giants defence while McQueen continued to dominate from the three point line with four from five. In fact he and Bezzant could not be contained with the two sinking a combined eight triples from 10 attempts.

Although in foul trouble, Samuel stepped up to the plate collecting a couple of crucial offensive rebounds to steadily extend his sides lead but it was Haize Walker that stunned many with an explosive final term. Walker downed a huge three pointer, but to prove it was no fluke he backed it up with two more triples within two minutes to well and truly seal the deal for the Jets and take home a 27 point win.

Falling agonisingly short of a triple-double Vodanovich starred for the Jets amassing 19 points, 18 rebounds and nine assists in what was a stats stuffing performance. Bezzant also left his mark knocking back 24 points while McQueen slotted 17 points of his own. All of the starting five for the Jets recorded double figures for points with Kirksey nailing 12 and Samuel finishing with 10 while Walker also sunk 13. On the other hand only three players managed to reach double figures for the Giants with Ingham posting 19 points and six rebounds, Karena (14 points, four rebounds) and Trathen (10 points, nine rebounds, four assists).

The Giants front up tonight in a quick turnaround to play Taranaki Mountainairs, while the Jets take to the court over the weekend in back-to-back games against Otago Nuggets and Auckland Huskies.