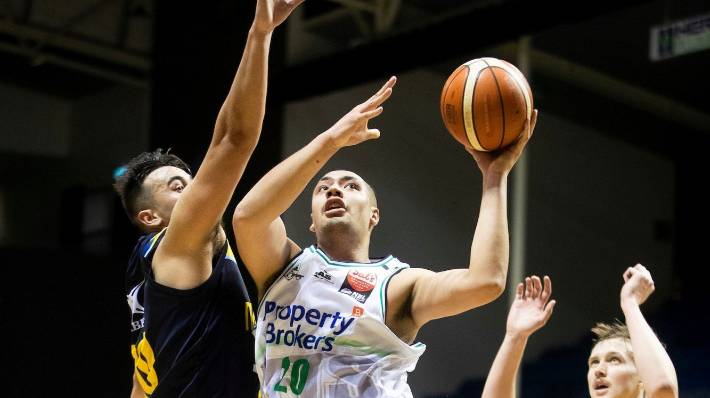 A QUARTET of big scorers led the Manawatu Jets to a memorable 15-point win over Canterbury Rams last night, handing the Rams their first defeat of the 2020 Sal’s National Basketball League (NBL) Showdown. Taane Samuel, Tom Vodanovich, Hyrum Harris and Jayden Bezzant all combined for 95 points, 27 rebounds, 14 assists, 10 steals and five blocks – almost the entirety of those stats other than assists, as they got the job done in a big way.

Canterbury Rams coach Mick Downer expressed concerns pre-game about how his team were going to face the Manawatu Jets’ forwards. Any coach would be concerned. But no one expected that by the final buzzer, the three forwards would combine for 70 points. The Rams walked into the Trusts Arena undefeated, and left knowing that there was still plenty of work to do in season 2020. At the start of a season, especially one that has begun in so chaotic as this one, teams need some time to learn things, and sometimes it can just be the opposition’s night. On this night, it was the Jets’ night who won two quarters convincingly to gain enough separation to lock away the points.

The first loss for the Rams came prior to the tip-off with Toby Gillooly, the Rams second leading scorer ruled unable to play. Against the wall, the Rams fought valiantly in the first quarter, but after an early Jets run and some costly turnovers, the Jets ended the first period up 22-16. It was an interesting term because Alex Talma had put the Rams in front with six minutes to play, and Thomas Webley had levelled the scores following a Sam Smith three-point jumper as the seventh minute ticked over, but again the Jets pushed clear.

Vodanovich and Samuels combined with Bezzant producing a nice lay up to hand the Jets a seven-point lead with 90 seconds left on the clock. The Jets fought back with a couple of late baskets, but a Bezant jump shot in the dying second went in and handed Manawatu a six-point lead at the first break.

In the second, the Jets decided to switch things up a bit. They settled for long range jump shots behind the three point line, in contrast to their first quarter objective of attacking the rim. Whether this was a coaching adjustment or just an effect of successful interior defense led by the Rams bigs, Talma and Ben Carlile-Smith, it was working as the Rams trailed back within four points.

Earlier in the term, Carlile-Smith had put the Rams in front momentarily before the Jets scored seven of the next nine points to hit the lead by four. Getting out to as much as an eight-point advantage in the term, the Jets looked comfortable, though the Rams fought back again late to get within two points, before a Vodanoich lay up with 30 seconds on the clock allowed the Jets to still maintain a narrow lead.

In the third, the Rams only had one shot not outside of the key while the Jets continued to test their luck from deep. A Bezzant triple just over a minute into the contest had his team up by nine, and whilst the teams traded scoring, the Jets were just more consistent and more accurate. Vodanovich drained a triple at the midpoint of he quarter to go 11 points up, and just as the Rams continued to fight back, the last two baskets – to Samuels and Bezzant – gave the “home” team a buffer heading into the last change.

Both sides were a little loose with the ball, producing back-to-back turnovers to start the final term, with Taylor Britt desperately trying to get his side back into it. Replacement player, Quintin Bailey drained a triple in the first couple of minutes of the quarter to counter a Vodanovich lay up, which had the Rams believing. But unfortunately for the league’s last undefeated side, everything Britt and his side threw at the Rams, the Jets had the answer.

In the end, the Rams could not get within single digits late in the term, which allowed the Jets to continue to control momentum, and get out to as much as an 18-point lead with 92 seconds to play. The Rams added the last three points of the game, but ultimately it would not be enough.

The Jets had so many contributors led by Vodanovich (25 points, 12 rebounds, three assists, three blocks and two steals), while Samuel (27 points, six rebounds, two assists, two steals and one block) and Bezzant (25 points, six assists and three steals) all racked up more than 20 points and packed the stat sheet. Harris was his usual self as well, dropping 18 points, nine rebounds, three assists, three steals and one block on the night. With the Most Valuable Player (MVP) votes, Samuel got the full 10, with Vodanovich eight and Bezzant five.

Britt’s 23-point, eight-rebound and five-assist game earned him five votes despite the disappointing defeat, whilst Sam Smith was also prominent with 16 points, eight rebounds and six assists. Off the bench, Webley could hold his head high with 17 points, but there was just not the same depth on the night that had been in previous matches.

The Rams will have an opportunity to immediately bounce back tonight when they take on the Nelson Giants, whilst the Jets get a break until Saturday before back-to-back games over the weekend against Franklin Bulls and Taranaki Mountainairs.