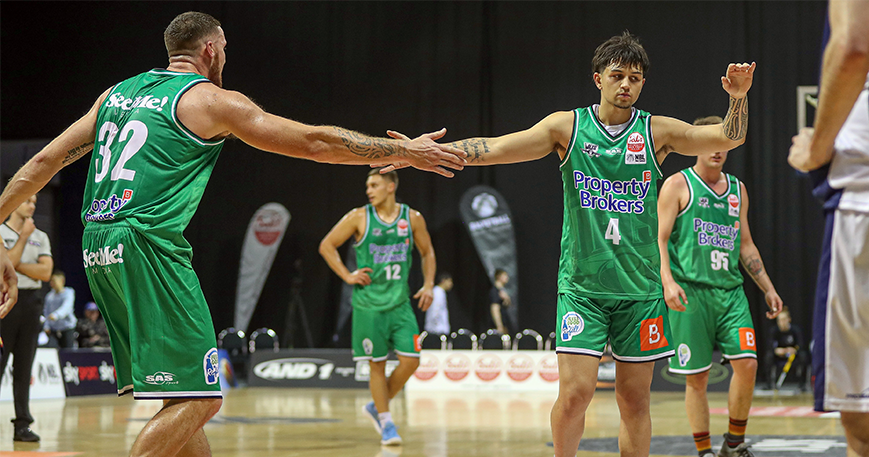 The Manawatu Jets backended another week of New Zealand National Basketball League (NZNBL) action as they took on the Taranaki Mountainairs. With both teams looking for back-to-back wins, an action-packed and offense stacked game would see the Jets taking the win 102-93.

No Hyrum Harris through a hip injury would again require a performance increase from some role players from the Jets as the third quarter would again prove pivotal in the result.

A physical yet scrappy contest from the outset, the fast-paced nature of the game was displayed early. The first score come after four possessions from Nick Fee, followed soon after with a triple from Taane Samuel, continuing his great start to the season. A Shane Temara layup would open the scoring for the Airs as he would have increased minutes with the absence of Tai Wynyard through illness. Derone Raukawa entered the game soon after with a hop-step close-range shot drawing the foul and converting the and-one to tie.

The anticipated matchup of high-scoring guards Jayden Bezzant and Raukawa would steal the show as they traded three balls as Francis Mulvihill joined the party soon after. The Airs would go on a nine-point scoring tear to give them an early lead, until the Jets mounted a run of their own which included a vicious Tom Vodanovich slam, his first points in the game. Confusion lead to one second being left on the clock as Ashton McQueen banked in a three to make it a one-point game the Airs way heading into the first break. Mulvihill and Raukawa led the way with nine and eight points respectively, but the Airs could not close out what was an otherwise controlled quarter of basketball on their behalf.

The second quarter maintained the rampant pace of the first as both teams were shooting early in their possessions and transitioning with pace. Though both teams were shooting the ball better, neither team could force consecutive stops defensively. McQueen provided the performance the Jets needed in Harris’ absence as he found himself with eight points mid-way through the quarter.

Not to be outdone, a Mulvihill triple saw his points tally creep up to 14. With scorers all over the court, Vodanovich struggled to get his shot going from deep as he seemed to be struggling find other ways to score despite his athleticism and strength.

The two teams would trade baskets the whole quarter as the Airs’ lead never exceeded six. A high-arcing Bezzant mid-range jumper would end the half with Taranaki leading 49-51. Bezzant (12 points), Fee (10 points) and McQueen (10 points) were leading the way for the Jets as the two guards Mulvihill and Raukawa had 14 and 13 respectively for the Airs.

A see-sawing affair in the first half promised much of the same for the second half as it went back and forth again for most of the third quarter. Manawatu’s big men in Samuel and Vodanovich come alive in the third as they took the lead and then lost it for almost seven minutes of action.

With good offense and poor defence a theme all game, the Jets strung together one minute of solid defence and they managed a seven-point lead, seemingly from nowhere. The damage didn’t stop there for the Airs as three consecutive triples including two in a row from Kalib Mullins and the final from Bezzant saw the lead blow out to 16 in the matter of two minutes.

After some replies to and from again, the third quarter ended with the Jets up 14 points. A scintillating few minutes of basketball on both ends from Manawatu all but ended the game thanks to 19 assists. Some great ball movement after some rigid defence allowing them to get on top with ease.

Much like the previous game, the Airs needed to come out strong, and they did with Kenneth Tuffin scoring his second basket of the game and Temara lighting it up as well. All of a sudden, the lead was back to single digits and thanks to some Raukawa magic with the and-one taking his points tally up to 20, it was a five-point ball game. The teams must have missed the action from the start of the game as they would continue to trade buckets, however, a Vodanovich three would ice the game, leaving them nine-point victors.

With Mullins and his eight points, the Jets’ points from the bench reached just 12. When the starting five performed the way they did tonight, though, it doesn’t require much more. Bezzant (24 points, seven assists) and Samuel (24 points, 11 rebounds) were the best players for Manawatu while Vodanovich’s big second half took his stats to 17 points and 12 rebounds. Fee (15 points, six rebounds) and McQueen (10 points, seven rebounds) also stepped up as the inclusion of Harris would be a scary proposition for opposition teams if the Jets can fire on all cylinders the way they did tonight.

Scoring 93 points won’t lose you many games and after a poor third quarter, the Airs should take some confidence knowing there was plenty left for them to do and they didn’t get blown out in the end. Raukawa (25 points, eight assists) and Temara (21 points, nine rebounds) kept the Airs in the game while double-double machine Marcel Jones (16 points, 16 rebounds) and Mulvihill (14 points) were solid contributors. They face first-placed Franklin Bulls on Tuesday and will be looking to bounce back.