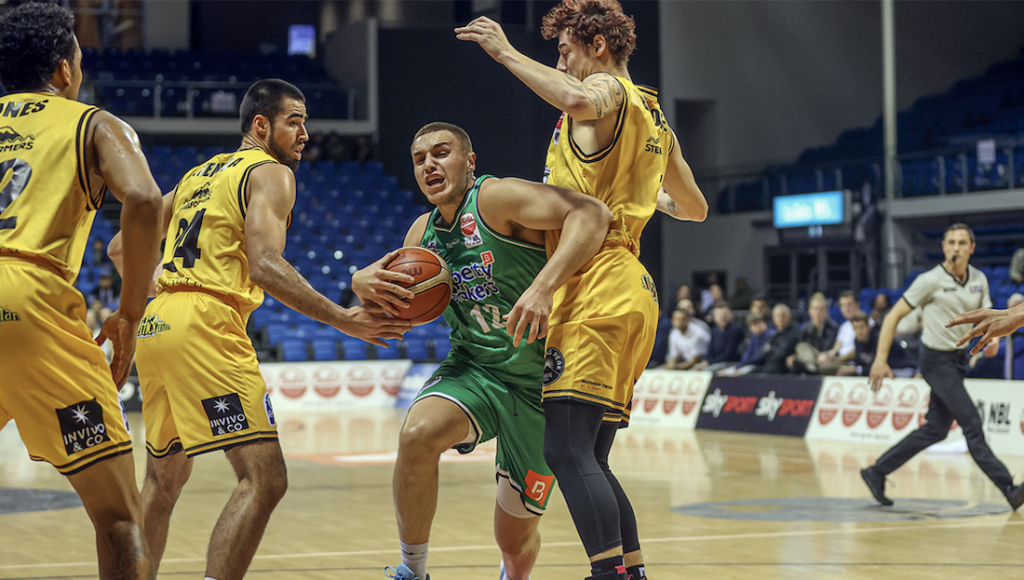 THE Manawatu Jets have knocked out the Taranaki Mountain Airs in a fast-paced second semi-final 105-95, therefore earning the right to compete for the New Zealand National Basketball League (NZNBL) Championship for just the second time in the club’s history.

Having fallen to them in both of their prior meetings, the Airs had no intention of getting off to a slow start against the Jets. But to make sure they got off on the right foot, Doug Courtney’s side had to neutralise the newly crowned MVP in Thomas Vodanovich. Meanwhile for Manawatu, their priorities laid with halting the league’s most lethal duo in Derone Raukawa (led the League in points and assists) and Marcel Jones (led the League in rebounding).

Both sides traded buckets early on, exchanging the lead seven times in the opening five minutes in a seesawing opening quarter. Five straight points from Ashton McQueen seven minutes in, saw the Jets produce the first noticeable advantage in the game leading by eight with two minutes to go in the first. This was emphasised further after a triple from Nicholas Fee found its mark and as a result, Manawatu found themselves leading by double-digits at the first intermission and shooting at a remarkable 68 per cent.

Taranaki’s frontcourt started to make its mark on the game, as Shane Temara and Tai Wynyard got early buckets in the second, using their strong bodies to gain valuable second chance points. A 6-0 run for the Airs brought the contest back to just a single possession, but the stint was quickly undone after Hyrum Harris converted a momentum killing And-One. Nevertheless, a physical brand of basketball from both teams kept spectators on their toes for the rest of the first half. Even though Manawatu maintained an efficient shooting clip, so did Taranaki. This time it was the Airs’ backcourt that started to make the difference, with individuals like Raukawa and Kenneth Tuffin closing the gap at half-time.

If Zachary Easthope had not fouled Jayden Bezzant on his last second three-point attempt, the Airs would have only trailed by a single basket at the main break. However, that was not the sequence and Bezzant capitalised, making all three shots from the charity strike and gifting the Jets a convenient five-point lead. As both teams shot at 51 per cent, it was Manawatu that could thank their aggressiveness for getting their noses ahead, getting to the line 11 times compared to the Airs who shot just five free-throws.

On an individual level, Jones stood alone at the top of both rosters. The All-Star Five nominee secured 18 first half points and nine rebounds without a missing a second of play through 20 minutes. Meanwhile, guards Bezzant and Raukawa both made noticeable contributions with 13 points each for their respective teams. Wynyard’s size proved too much for Taane Samuel and the Jets early on, with a couple of baskets two minutes into the third and Temara provided the extra points where they were needed. This tied the game at 58 three minutes into the second half and the seesawing affair would resume again. A magical spinning floater in the key from Raukawa with three minutes to go in the third, gave the Airs the lead for the first time since the opening term. This was further compounded following an exquisite pick-and-roll between Jones and Wynyard, extending their fragile lead to three with a quarter to play and a critical quarter overall for the Airs, winning the term 20-12.

The duo of Samuel and Harris proved fruitful in the infant stages of the final quarter, helping their side even up the game and eventually retake the lead two minutes into the period. Then, a 10-0 run from the Jets capped off by a McQueen fast-break three, got Manawatu’s noses in front by eight and regained control back to Tim McTamney’s boys. Manawatu blew the game out of the water at the mid-way stage of the fourth, putting the deficit into double digits once again and forcing Raukawa and Jones to force their hands on numerous trips up the floor. With Taranaki in the bonus with more than four minutes still to play, it made closing the gap on the Jets that much more difficult, as they trailed by 10 in the dwindling moments of the game.

League MVP Tom Vodanovich would contribute to seven of his team’s final 11 points before picking up his fifth foul with a minute remaining, as consistent free-throw shooting topped off a well-rounded night for the Jets, eliminating a resilient Taranaki side 105-95 and earning their second ever Grand Final spot in club history. Even though the Airs shot better overall on the night, it was Manawatu that forced Taranaki to make an abundance of errors throughout the four quarters. While the Jets conceded eight takeaways in 40 minutes, Taranaki were induced into giving up the ball a total of 16 times, 12 of which were as a result of steals. In turn the Jets punished the Airs for this, scoring 25 points from turnovers, being a major factor in their side’s victory.

Vodanovich put together a team-high 28 points along with 11 rebounds, while Harris contributed another multi-faceted game with 17 points, 11 rebounds, seven assists and seven steals accounting for more than half of the team’s steal totals. Another surprising participant for the Jets was big-man, Taane Samuel, securing 23 points and five rebounds in over 30 minutes on the floor. In their final outing, like so many times before, the Airs’ highlights came from predominantly two men. Raukawa who was a man on a mission found his way to account for 32 points and five assists, while his right-hand man in Jones submitted 25 points, 13 rebounds and six assists in the loss.

Manawatu Jets’ forward, Harris credited the outcome post-game to a strong second half, noting a change in defensive transition and focusing their attention more on their scoring, but remains confident heading into the grand final.

“I think with us it’s just a mental thing,” said Harris. “We’ve just got to push through those sorts of calls and any stuff that happens, but I think we did a good job of it [tonight] and obviously we came out with the win.”

The Jets look to Saturday’s Grand Final looking to exact revenge on an Otago Nuggets team that has beaten them in all four of their previous encounters to this point (most recently by 25 in the qualifying final). Can Manawatu promote a different result the fifth time round? We will find out tomorrow night.