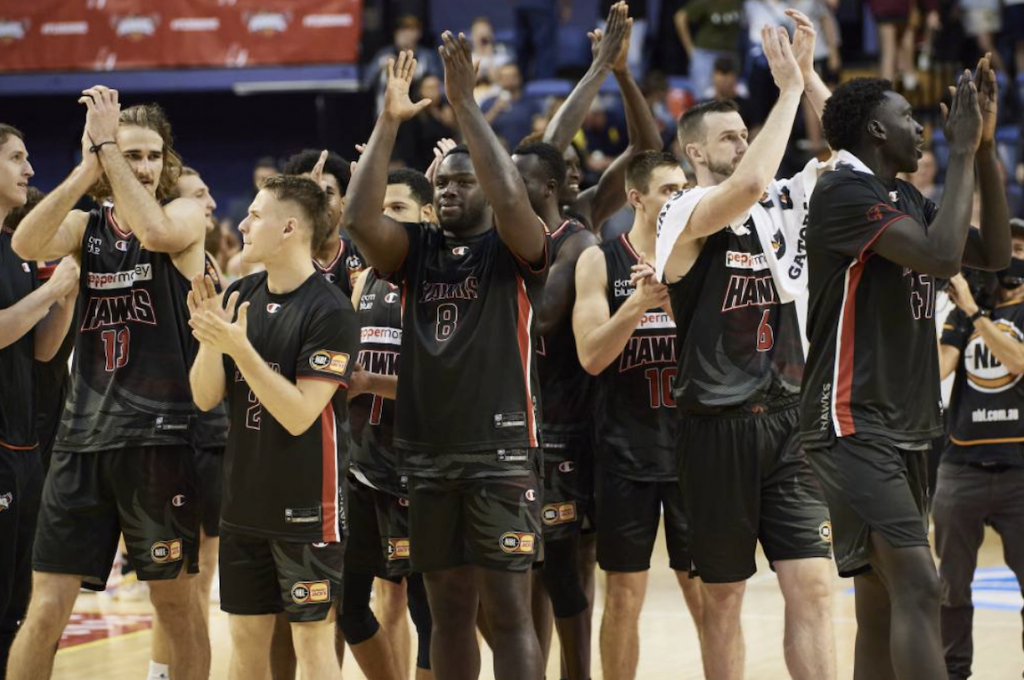 REINVIGORATED by their head coach, the Illawarra Hawks charged back last night with an inspired fourth quarter effort to steal away a win against the South East Melbourne Phoenix, 82-80, ending a three-game losing streak and winning their second game in seven outings.

Sluggish would be a rather overstated way of describing the events of the first quarter, as the Hawks conducted their lowest scoring opening period of the season with just 10 points to their name and no individuals with multiple baskets after 10 minutes. The Phoenix were not much better as they were only able to produce 18 points, however, an eight-point lead is always welcome to an NBL side.

Two quick buckets from Sam Froling to open the second was a direct result of Brian Goorjian’s stern words at the first break and the deficit was made substantially smaller too. Before Illawarra could gather too much momentum, South East Melbourne held their own and managed to keep their noses in front after two quarters. But the Hawks’ missed opportunities had the hosts frustrated and when Keifer Sykes knocked down a transition and second chance three with less than two minutes remaining in the half, the Phoenix could smell blood in the water, leading at the midway point 41-30.

Things looked like they were getting out of hand for the Hawks after Kyle Adnam got the second half underway with back-to-back triples, although a three of his own from Justinian Jessup slowed the roll of the Phoenix. Nevertheless, Simon Mitchell’s side continued to keep their opponents at arm’s length while the Hawks kept biting away at their deficit on the scoreboard.

With Tyler Harvey and Jessup spreading the floor and making their shots, the Hawks would win the third quarter 25 to 20 and trail by just six points with the final term still to be played. Meanwhile, Sykes, Adnam and Mitchell Creek needed to find a way to put away Illawarra, who were trying to avoid a sixth loss in seven matches.

The Hawks kept banging on the door and in the last five minutes of the fourth, Illawarra’s final charge would be led by none other than Harvey after hitting another triple. Jessup then converted on an And-One, which preceded buckets by both Froling and Justin Simon, cutting the Phoenix’s lead to a single point.

With two and a half minutes to go, another three-pointer from Jessup would gift the home side the lead, which was further compounded by yet another triple via Harvey to put the Hawks up by as much as seven points. Adnam and the rest of the South East Melbourne shooters tried their best to shoot themselves back into the contest, but Illawarra’s last-minute stand was enough to end the team’s recent dry run of form, earning the two-point win in front of an ecstatic Hawks crowd.

Both sides improved their offensive output as the night progressed culminating in both the Hawks and the Phoenix finishing with 44 per cent efficiency from the field in shooting. Illawarra gained the upper hand in statistics like free throw shooting, steals, blocks and points from turnovers, whereas South East Melbourne earned the advantage in rebounds and assists. The Phoenix also outscored the Hawks off the bench with 31 of their points flowing through their secondary unit.

Performing at an elite level once again, Adnam shot for 22 points along with five threes at 70 per cent from the field. However, with the return of Creek (15 points and six rebounds) and Sykes (14 points), the Phoenix duo can expect more court time after being away from the game for an extended period of time.

Now that Illawarra are back in the top four, they will need to defend their position when they face off with the Cairns Taipans on Sunday to round out their three-game week. Two hours prior to that, the Phoenix will travel to Sydney to meet the Kings and try to avoid two losses in the same week.