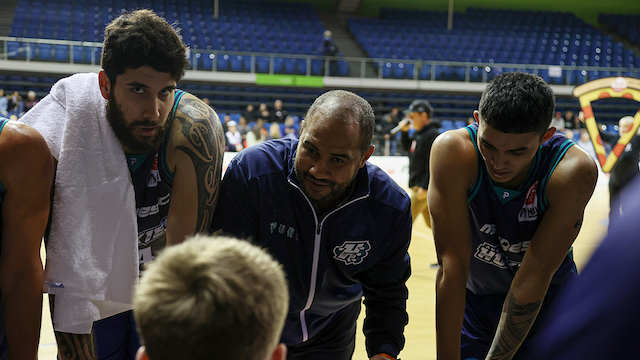 A HUGE ladder-defining Sal’s National Basketball League (NBL) Showdown contest ensued on Wednesday night as the Canterbury Rams took on the Auckland Huskies with no winner in clear sight until the last few minutes when the Huskies emerged victorious. From the very beginning, the Rams enforced their dominance by killing the Huskies for rebounds. Both teams came into the game looking just a little sloppy, with silly fouls, thoughtless turnovers and questionable shots, yet the rhythm of the game was quickly about to change as Auckland got the points, 90-81.

What did not change was that with every shot, red jerseys swamped the glass but the Huskies were finding their way into the driving lane with ease. Nice interior passing and remaining patient near the basket was how the Rams kept it close for the start of the quarter. It was the Huskies’ strong defensive plays that saw Auckland begin to lead, extending to a three-point margin that would provide a buffer for the rest of the match.

Rams’ Thomas Webley had the play of the game, and maybe the season, as the quarter nearly closed. It was a jab-step crossover so deadly that it knocked the defender to the ground, closing in to slam it over a Huskies defender. Five seconds later, he swatted Jaylen Gerrand‘s ball – a 10-second clip that Webley might hold onto for a while.

But Gerrand came out streaky in the second, with back-to-back to back made threes, helping the Huskies to lead by nine. His value only increased when every defending Ram had one eye on the ball and one on Gerrand, leading the Huskies to knock down easy jumpers.

The Rams’ strategy was the exact opposite – they attacked the rim in nearly every possession. This is easier when you have someone like Taylor Britt, a player so quick on the dribble that he can beat his man or find the open one. But after running a play just like that, Britt hit his already injured elbow into a defender diving for a rebound. Britt crashed to the floor holding his elbow but would get back up a few seconds later. A timeout was called, and the Rams’ chances for a comeback felt increasingly slim, but as the timeout ended Britt re-took the floor and ran the first play for the Rams. A moment that would act as a turning point in the game, the Rams had time to reflect on it as they went back into the locker room down by nine at half-time.

With smart passing, aggression in the lane and immaculate defence, it was like the Rams just started the game again. Within two minutes of the second half beginning they were back within a basket. Finally after a 8-0 run coming out of half-time, the Huskies called a time out but it was too late – that 8-0 run became a 10-0 run, and before you knew it, the game looked like it was for a championship or bust. Diving on loose balls, scrambling for rebounds and piercing passes were just some of the things that made this quarter remarkable. Gerrand was able to stabilise the game for the Huskies with a flashy layup but the intensity did not waver. It was a hotly contested game, with both teams arguing with the referees on almost every call.

Quintin Bailey was instrumental in not allowing any easy baskets under the rim. Yet the same went for opposing big man, Leon Henry. Both teams were forced to settle for jump shots, especially in the third quarter. The tough battle continued, with Webley forced to exit the game for a blood rule though the origin of the blood was unknown. The third quarter would end 57- 64 as the Huskies had survived the comeback and were now battling with their head just above water in the fourth.

That burning resilience shown by the Rams in the third had clearly taken its toll, with the side allowing far too many close rim shots early. The Huskies, noticing this opportunity, directed all of their plays towards the rim to block the Rams and limit scoring opportunities. But fatigue hurt the Rams in more than one place, with Britt’s lighting quick moves slowing down as the game went on. Britt is not just the leading playmaker for the Rams, but is also a barometer for the team, meaning as his foot came off the pedal so did the rest of the Rams’.

Lucky for the cellar dwellers, the Huskies also went through the same issue in the latter stages of the game. Huskies coach, Kevin Braswell tried to counter this by running a zone on the other side of the floor, and the strategy worked as the Huskies hit back-to-back threes to bring the lead to nine with over five minutes to go. The hot hands would not leave the Huskies as that lead became 10, then 12 and then finally back to nine, to sound the horn as the Huskies won 90-81.

Tohi Smith-Milner (22 points) and Henry (13 points, 12 rebounds) both finished with double doubles on the night, while Gerrand was the Huskies’ top scorer thanks to 26 points and two rebounds. Izayah Mauriohooho Le’afa (17 points, nine assists and four rebounds) and Reuben Fitzgerald (10 points, three rebounds) also reached double-figure points. For the rams, Britt helped himself to a team-high 19 points, five rebounds and four assists, while Alex Talma (15 points, 11 rebounds) picked up a double-double. Toby Gillooly stepped up to recorded 16 points, eight rebounds and three assists, while Bailey (13 points, six rebounds) was prominent off the bench.

Each team has one remaining game in the regular Sal’s NBL season and play on Saturday evening with the Rams to face the Franklin Bulls and Huskies to matchup against the Manawatu Jets in the final game of the night.